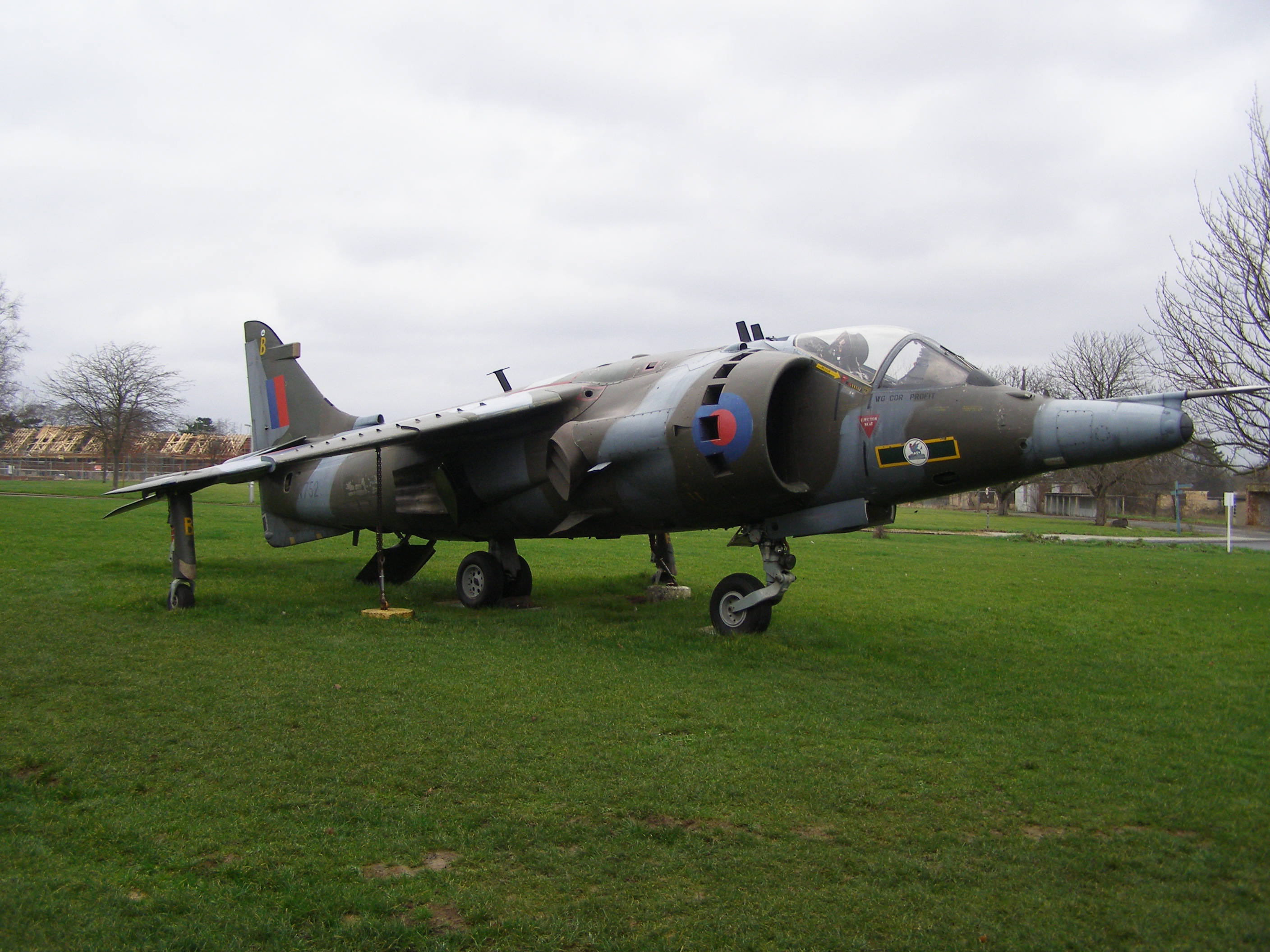 The Harrier GR.1/GR.3 and the AV-8A Harrier are the first generation of the Harrier series, the first operational close-support and with (V/STOL) capabilities. The Harrier was the only truly successful V/STOL design of the many that arose from the 1960s.

In the 1970s, the Harrier was developed into the radar-equipped for the . The Harrier was also extensively redesigned as the and , which were built by and .

The Harrier's lineage began with the . Design began in 1957 by Sir , Ralph Hooper of and (later Sir Stanley) of the . Rather than using rotors or a direct jet thrust the P.1127 had an innovative "vectored thrust" turbofan engine and the first vertical takeoff was on 21 October 1960. Six prototypes were built in total, one of which was lost at an air display.

The immediate development of the P.1127 was the Hawker Siddeley Kestrel FGA.1, which appeared after was created. The Kestrel's first flight was on 7 March 1964. It was strictly an evaluation aircraft, and only nine were built. These equipped the Tripartite Evaluation Squadron formed at in , numbering 10 pilots from the RAF, USA and West Germany. One aircraft was lost but the remainder transferred to the U.S. for evaluation by the Army, Air Force and Navy, designated XV-6A Kestrel.

At the time of the development of the P.1127, Hawker had started on a design for a version, the . After this was cancelled in 1965, the RAF began looking at a simple upgrade of the Kestrel as the P.1127 (RAF).

An order for 60 production aircraft was received from the RAF in mid-1966, and the first pre-production Harriers, then known as the P.1127 (RAF) were flying by mid-1967, becoming known as Harrier GR.1.

The Hawker Siddeley Harrier GR.1 was the first production model derived from the Kestrel, it first flew on 28 December 1967, and entered service with the RAF on 1 April 1969. Construction took place at factories in in southwest London and at Dunsfold, Surrey. The latter adjoined an airfield used for flight testing; both factories have since closed.

The ski-jump technique for STOVL use by Harriers launched from s was tested at the Royal Navy's airfield at , . Their flight decks were designed with an upward curve to the bow following the successful conclusion of those tests.

The Harrier GR.3 featured improved sensors (such as a laser tracker in the lengthened nose), countermeasures and a further upgraded Pegasus Mk 103 and was to be the ultimate development of the 1st generation Harrier.

The Harrier was also a manoeuvrable and a potent air-to-air fighter, being able to out-manoeuvre other fighter aircraft then in service.Fact|date=August 2008 The air combat technique of , or "viffing," was formally developed by the USMC in the Harrier to outmanoeuvre a hostile aircraft or other inbound weapons.

In addition to normal flight controls, the Harrier has a lever for controlling the direction of the four vectorable nozzles. The nozzles point rearward with the lever in the forward position for horizontal flight. With the lever back, the nozzles point downward for vertical takeoff or landing. [Markman, Steve and Bill Holder. "MAC-DAC/BAe AV-8 Harrier Vectored Thrust VTOL". "Straight Up: A History of Vertical Flight". Schiffer Publishing, 2000. ISBN 0-7643-1204-9.]

The first major combat experience for the Harrier in British service was during the where both the FRS.1 and Harrier GR.3 were used. The Sea Harrier, developed from the GR.3, was important to the naval activities. Twenty Sea Harriers were operated from the carriers HMS "Hermes" and "Invincible" mainly for fleet air defence. Although they destroyed 21 Argentine aircraft in air combat (in part due to using the American-supplied latest variant of the Sidewinder missile and the Argentine aircraft operating at extreme range) they couldn't establish complete air superiority and prevent Argentine attacks during day or night nor stop the daily flights of transports to the islands.

Harrier GR.3s were operated by the RAF from "Hermes", and provided close support to the ground forces and attacked Argentine positions. but were unable to destroy the Stanley runway. If most of the Sea Harriers had been lost, the GR.3s would have replaced them in air patrol duties. Four Harriers GR.3s were lost to ground fire, accidents, or mechanical failure. [ [http://www.naval-history.net/F63braircraftlost.htm Harriers lost in the Falklands] ] The RAF Harriers would not see further combat, as the Hawker Siddeley airframes were replaced by the larger Harrier II developed jointly by McDonnell Douglas and British Aerospace.

bombs on its right wing.]

;Harrier GR.1 : The first production model derived from the Kestrel;Harrier GR.1A : Upgraded version of the GR.1, the main difference being the uprated Pegasus Mk 102 engine. Fifty-eight GR.1As entered RAF service, 17 GR.1As were produced, a further 41 GR.1s upgraded.;Harrier GR.3 : Featured improved sensors (such as a laser tracker in the lengthened nose and radar warning receiver on the fin and tail boom) and a further uprated Pegasus Mk 103. It was to be the ultimate development of the first-generation Harrier. The RAF ordered 118 of the GR.1/GR.3 series.;Harrier T.2 : Two-seat training version for the RAF.;Harrier T.2A : Upgraded T.2, powered by a Pegasus Mk 102.;Harrier T4 : Two-seat training version for the Royal Air Force, equivalent to the GR.3.;Harrier T4N : Two-seat training version for the Royal Navy.;Harrier Mk 52 : Two-seat company demonstrator, one built.;AV-8A Harrier : Single-seat ground-attack, close air support, reconnaissance, and fighter aircraft; similar to the earlier GR.1, but with the GR.3 engine. 113 ordered for the U.S. Marines. Company designation Harrier Mk 50.;AV-8C : Upgraded AV-8A for the U.S. Marine Corps.;AV-8S Matador : Export version of the AV-8A Harrier for the , later sold to the . Spanish Navy designation VA-1 Matador. Company designation Harrier Mk 53 for the first production batch, and Mk 55 for the second batch.;TAV-8A Harrier : Two-seater training version for the US Marine Corps. The TAV-8A Harrier was powered by a 21,500 lb Rolls-Royce Pegasus Mk 103 turbofan engine. Company designation Harrier Mk 54.;TAV-8S Matador : Export version of the TAV-8A Harrier for the Spanish Navy. Later sold to the Royal Thai Navy. Spanish Navy designation VAE-1 Matador. Company designation Harrier Mk 54.

The Harrier's unique characteristics have led to it being featured a number of films and video games.

* Type GR.3 is on display at the Flugausstellung Leo Junior at in