Emperor Daozong of Liao (Chinese: 辽道宗; pinyin: Liáo Dàozōng) (September 14, 1032–February 12, 1101), born Yelü Hongji or Yehlu Hongji (Chinese: 耶律洪基; pinyin: Yēlǜ Hóngjī), was an emperor of the Liao dynasty, a kingdom of the Khitan people in what is now northeastern China. Succeeding his father, Xingzong, in 1055, Daozong ruled until he was murdered in 1101. He was succeeded by his grandson, Tianzuodi. He reigned from 28 August 1055 to 12 February 1101 .

Daozong was notable for reviving the name "Great Liao" in 1066, a designation first given the kingdom by Emperor Taizong in 947. Other noteworthy achievements made during his reign include the completion of a Liao edition of the Buddhist Tripitaka and the construction of the Sakyamuni Pagoda in 1056. 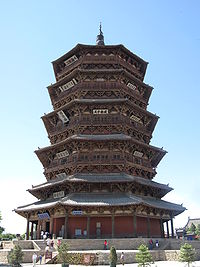 The Pagoda of Fugong Temple, built in 1056 at the site of Daozong's grandmother's family home in Ying County, Shanxi.

He survived at least one attempt on his life in 1063, when a group of Khitans, angry that their system of tribal justice had been put under local Chinese administration, ambushed his hunting party. Daozong survived the attack and the rebels were executed, but to reassert his legitimacy as ruler he was forced to perform a traditional "rebirth" ceremony. In 1070, he restructured the legal system to reflect the differences in Chinese and Liao customs.

However, Daozong's reign was fraught with corruption. Daozong spent lavishly on his palaces and his Buddhist worship. Many people under his rule were angered by the high taxes and began to rise against Liao, most notably the Jurchen tribes.