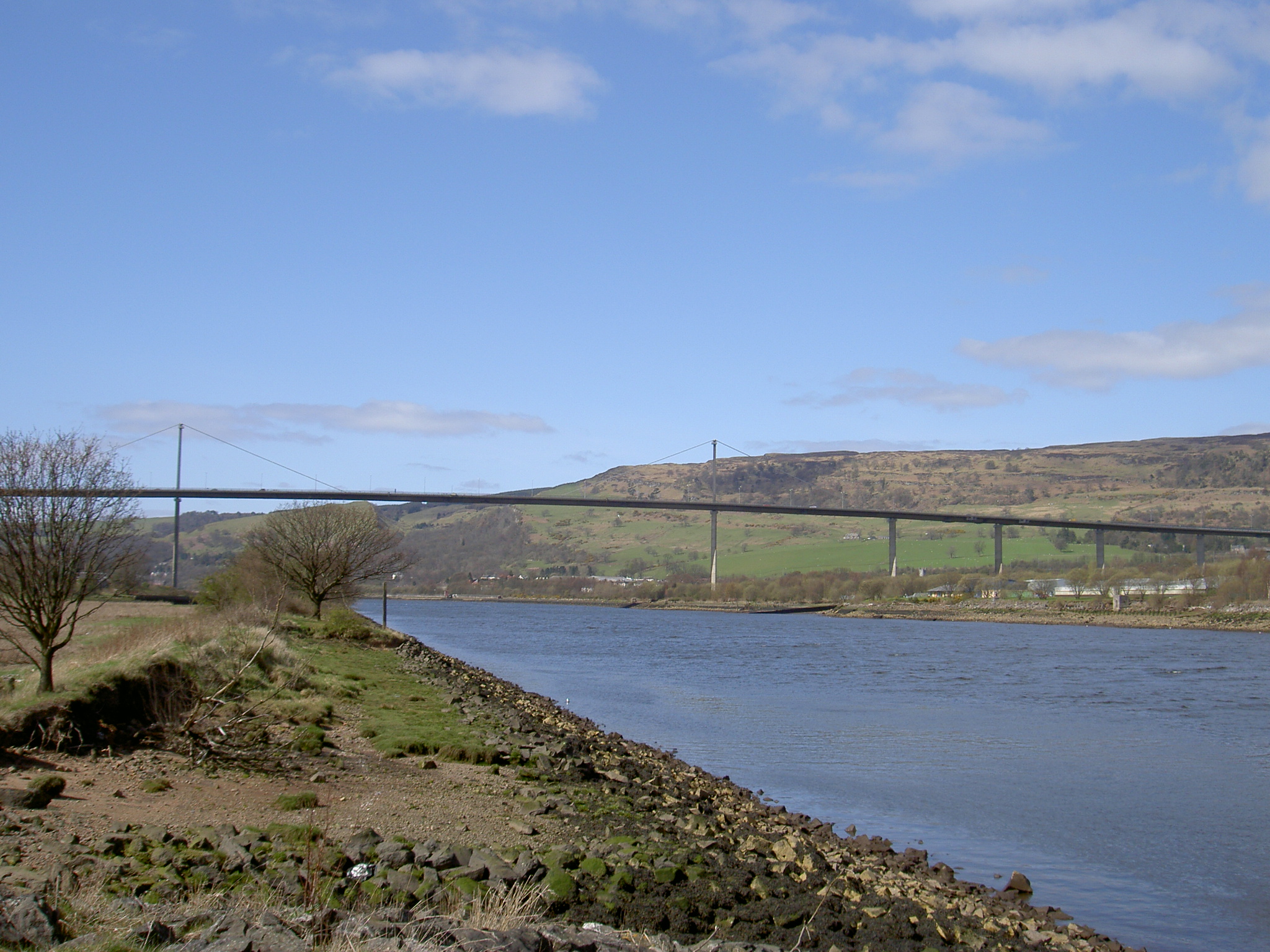 caption= View of the Erskine Bridge from the Clyde Walkway.
official_name = Erskine Bridge
locale = ,
carries = Motor vehicles, cyclists and pedestrians
crosses =
open =
traffic = ~26,000 vehicles
design =
toll = Free
mainspan = 524 m (1719 ft)
width = Dual two-lane carriageway, two cycle/footpaths (total width 33 m)
coordinates= coord|55|55|13|N|4|27|44|W|region:GB_type:landmark|display=inline,titleThe Erskine Bridge is a cable-stayed spanning the in west central , connecting with . During construction of the bridge, a major collapse of the in , a bridge of a similar construction, saw re-calculations in the design and it was found that it would fail to meet in the middle. As a result two large cable-stays were added to the box girder structure as support.

The bridge was designed by William Brown and opened on by HRH Princess Anne. It has a 524 m main span and two 68 m approach spans and is 38 m high and 1310m (4300 ft) long. The ceremonial plaque of the opening can be viewed on the railings of the western footpath, at the centre of the main span.

The bridge connects the at in Renfrewshire on the south side to the at in West Dunbartonshire on the northern side. The bridge itself is the A898 road and its short approach from the south is the . The Erskine Bridge is the most downstream of all the Clyde bridges, and is the last point at which the estuary can be crossed by road. Its main function is to divert traffic away from and the urban stretches of the A82 which run through the city's West End and outer suburbs. As a result, the bridge is heavily used by tourist traffic bound for and the north west Highlands.

As part of a , it is the responsibility of the , and was one of only three s in Scotland when the tolls were abolished on &ndash; the others being the and the , where tolls were abolished on . The bridge had (briefly) been free of charge before - in 2001 an oversight caused the legislative order enforcing the toll to lapse and drivers crossed uncharged until the new order was enforced.

Its current traffic levels are estimated at 26,000 vehicles per day. For many years the bridge was considered something of a white elephant given its elaborate design yet relatively low traffic levels compared to the congested Kingston Bridge further upstream. It is expected to have a major increase in traffic since toll removal.

On the bridge was damaged when an oil rig being towed down the River Clyde collided with the deck. The bridge re-opened to and on , to cars and on and to s on 1996. The cost of the repairs was GBP 3.6 million with a further GBP 700,000 in lost revenue from tolls.

An often overlooked feature of the bridge are four public telephone boxes situated on the twin footpaths running adjacent to the roadway on either side of the river, in addition to the regular 'SOS' phones seen on motorways. Each kiosk features an advert from the Samaritans and are provided as a service to those who may be considering committing .