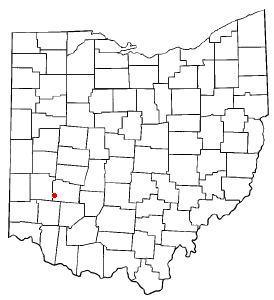 Bellbrook is a wealthy city in Greene County, , . The population was 7,009 at the 2000 census. It is part of the Dayton Metropolitan Statistical Area.

Bellbrook was first settled in . The name derives from one of the city's founders, Stephen Bell (eponymous with the local elementary school).

Initially a village, Bellbrook grew through annexation of territory from surrounding Sugarcreek Township. The first annexation, in 1970, helped push the population over 5,000 and led to Bellbrook achieving city status in 1974. With large amounts of buildable land, the area added over 1,000 housing units since the annexation. [http://www.cityofbellbrook.org/bellbrookprofile.htm]

On November 8, 2005, Sugarcreek Township residents defeated by 22 votes a measure supporting the creation of a commission to study a with Sugarcreek Township. Bellbrook voters approved the study. However, the measure required both the city and the township to approve the study. [http://www.cityofbellbrook.org/city%20manager.htm] . Bellbrook and Sugarcreek Township will vote again on November 4, 2008 on whether to create a merger study commission. [http://www.daytondailynews.com/search/content/oh/story/news/local/neighbors/2008/08/28/ddn082808ezlevies.html]

Some of Bellbrook's former and current residents include actor and comedian and writer .The city holds the Sugar Maple festival every year on April 20th.

There were 2,596 households out of which 39.8% had children under the age of 18 living with them, 68.0% were married couples living together, 7.0% had a female householder with no husband present, and 22.1% were non-families. 18.8% of all households were made up of individuals and 5.9% had someone living alone who was 65 years of age or older. The average household size was 2.70 and the average family size was 3.11.

Bellbrook is governed by a form of administration. The is appointed by council, while the council is elected for four-year terms, and the mayor for two-year terms, in non-partisan elections. The current Mayor is the Hon. Mary Graves and the City Manager is Dave Hamilton. The current Vice Mayor is Mike Schweller, and the other members of the City Council include- Denny Bennett, Ralph Fussner, Pat Campbell, Bob Baird, and Joe Ritzel.

The government boasts that it is one of five cities in Ohio with no personal income tax. In addition, the city has never raised property taxes above their 1981 levels nor does it carry any general obligation debt. However, it should be noted that various entities such the school board and the local police and fire departments have increased property taxes to fund their services. [http://www.cityofbellbrook.org/city%20manager.htm]

Bellbrook is served by a branch of the called Winters-Bellbrook Community Library.