The chipa guasu is a cake made with corn grains, and one of the 70 varieties of “chipa”, a food that is original and typical of Paraguay. Its taste is absolutely delicious and is mandatory served in “asados” (social meetings where diverse cuts of grilled cow meat, pork and sausages are eaten, the Paraguayan version of the American barbecue). 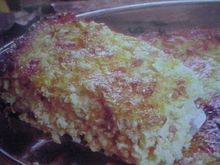 Like every meal of Paraguayan gastronomy, it contains, for reasons that are historically refuted, a high value in calories.

The “chipa guasu” owes its name to the conjunction of two words. The first, “chipa” refers generically to a diverse group of cakes that has corn as a base for its preparation and that is part of the “Tyra”, a Guarani term that names every food consumed to accompany the "mate cocido", milk or coffee, or prepared just to be an addition to other dishes. The second word that intervenes in the composition of the name, “guasu”, means “big” by which it can be inferred that “chipa guasu”, is the biggest of all “chipas”.

Chopped onions, water and salt, are boiled in a pot for about 10 minutes, and then let cool down. The pork fat is whipped until it turns creamy and a much lighter color, then the eggs are added one by one along pieces of fresh cheese, all without stop whipping. The boiled onions are added to this creamy preparation, and also the grains of corn (that have been previously mollified) and the milk.

Mix all together and the result is a paste that is put in a buttered or floured oven tray.

A variant of “chipa guasu” may not contain eggs, in which case it requires more milk.

The “chipa guasu” is prepared as ”sopa paraguaya” but using corn grains instead of corn flour.

According to some scholars of social history of Paraguay, all the Paraguayan popular gastronomy, which establishes itself as a small family industry after the War of Paraguay against The Triple Alliance (Argentina, Brazil and Uruguay, between 1864 and 1870), is really abundant in caloric content, because of the situation that overcame to the country after the conflict. In the aftermath of the war the food was limited and the groceries were hard to find. So Paraguayan cooking has a high protein content to make up for the scarcity of every day meal.