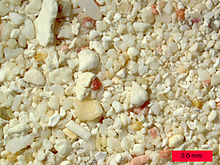 Coral sand from a beach on Aruba

Coral sand is sand of particles originating in tropical and sub-tropical marine environments from bioerosion of limestone skeletal material of marine organisms. One example of this process is that of parrot fishes which bite off pieces of coral, digest the living tissue, and excrete the inorganic component as silt and sand. However, the term "coral" in coral sand is used loosely in this sense to mean limestone of recent biological origin; corals are not the dominant contributors of sand particles to most such deposits. Rather, remnant skeletal fragments of foraminifera, calcareous algae, molluscs, and crustaceans can predominate. Because it is composed of limestone, coral sand is acid-soluble.

Coral sand mining is a significant industry in some areas, and can have damaging environmental effects. Over 500,000 tons of coral sand are mined annually from Mauritius. Many Comoros beaches have been scarred by sand mining. Over 250 tons of shells and corals were exported from Tanzania in 1974. Exploitive collection has moved from the depleted areas off Tanzania and Kenya to the islands of Zanzibar and Mafia.

Such extensive mining can be very harmful to reef ecosystems and beaches.

In an effort to prevent damage from reef sand minding, the Convention on international trade in endangered species urged parties to the convention to work for the conservation and sustainable use of the coral reef ecosystems.