Oakwood is a city in Montgomery County, Ohio, United States. The population was 9,202 at the 2010 census.[4] Oakwood is part of the Dayton Metropolitan Statistical Area. It was incorporated in 1908. John Henry Patterson, industrialist and founder of the National Cash Register Corporation, is considered the "Father of Oakwood."[5]

Oakwood is completely land-locked by the surrounding municipalities of Dayton and Kettering. Its small, compact geographic area facilitates the response of its single unified (consolidated) Department of Public Safety, in which all personnel are certified as police officers, firefighters, and emergency medical services (EMS) officers. Oakwood is one of only a few U.S. cities to employ the concept. Public safety officers work 24-hour shifts, performing the different functions within eight-hour blocks of each shift.

At the turn of the twentieth century, Oakwood was primarily farmland situated on a hill directly south of the City of Dayton. In 1913, when a disastrous flood devastated downtown Dayton (the Great Dayton Flood), advertising began to tout Oakwood property as "275 feet higher than the intersection of Third and Main Streets."[6]

In light of this real estate advantage and its location adjacent to the City of Dayton, Oakwood’s largest period of growth began and by 1930, the village population numbered over 6,000. Oakwood incorporated as a city in 1908 and in 1932 adopted the Council/Manager form of government that is still in place.

One of the city’s early residents was Orville Wright, whose home, Hawthorn Hill, still stands at the corner of Harman and Park Avenues. John H. Patterson, founder of the National Cash Register Company (NCR) also called Oakwood home. The city is known as a suburban residential area with mostly tree-lined streets.

During World War II, the Runnymede Playhouse in Oakwood hosted Unit IV of the Dayton Project. The Dayton Project was a little-known part of the Manhattan Project involved in creating industrial quantities of polonium for use in the neutron generating triggers of the first atomic weapon.

It is within the Miami Valley region of southwestern Ohio, and borders on Dayton, Ohio to its North and East and Kettering, Ohio to its South and West. The campus of the University of Dayton is directly adjacent to Oakwood on the northeast.

According to the United States Census Bureau, the city has a total area of 2.97 square miles (4.8 km²), all of it land.

The city is unofficially divided into two parts, east and west, by the city's major road, State Route 48, also termed Far Hills Avenue. SR 48 runs north-south and connects the city of Dayton with Oakwood and, further south, with Kettering and other suburbs. The geography of the eastern and western sections differs to a significant extent, with the western side covered in prominent hills, while most of the eastern section is predominantly level or gently sloping.

Oakwood contains a rich collection of architecture. Because of the city's age, many of the houses were constructed before World War II and are older in design. Houses in Oakwood, which vary greatly in size, have styles which include Tudor, Swiss chalets, Georgian Colonia), White Clapboard Colonial, and Gothic Revival. The western end of the city features many large properties and historic houses, such as Hawthorn Hill, home of Orville Wright. The houses in this area tend to lie on well secluded plots of land, surrounded by many trees.

Because of Oakwood's affluence, there is a general societal push for beautification. Rundown houses and unkempt lawns are generally frowned upon by the community and result in neatly cut lawns and gardens. The city itself gives "Beautification Awards" to the judged most beautiful houses in order to maintain this high level of aesthetic awareness. The city has relatively strict zoning laws that restrict major changes to houses and require city approval for any planned structural additions. The city prohibits chain-link fences that can be seen from the street, and requires all external utility units (such as air conditioning units) to be obstructed from the view from the street.

Public architecture is a general source of pride for the Oakwood community. The city buildings were designed to incorporate the rich variation of traditional architectural styles found in the city's houses. Oakwood High School displays an elaborate external design. The elementary schools, Edwin D. Smith Elementary School and Harman Elementary School, echo this elaborate style. Smith Elementary is built in the Tudor style like the High School while Harman Elementary is Colonial revival. The newest addition to the school system, the Julian and Marjorie Lange School, features Spanish revival architecture. The Oakwood Board of Education occupies a gray stucco manse with red tile roof in the northern most area of Oakwood on Rubicon Road. Wright Memorial Library[7] offers similar aesthetics, and the police and fire department is reminiscent of a French chateau.

Oakwood schools are repeatedly ranked among the very best in Ohio and the top-tier in the nation. NeighborhoodScout.com chose Oakwood as number 3 in 5 for the entire Midwest. The school district's mascot is the Lumberjack so as to pay homage to the wooded areas which gave Oakwood its name.

One contiguous junior and senior high school provides education for all Oakwood students grades seven through twelve. Oakwood High School graduated its first senior class in 1924 and began the practice of the Baccalaureate ceremony at Westminster Presbyterian Church in downtown Dayton. The end of an Oakwood student's experience is the Senior Awards, Baccalaureate, and Commencement ceremonies. The top senior awards are the Daisy Talbott Greene and Harry E. Talbott awards which are narrowed down throughout the school year to the best all-around senior female and male as voted by the high school faculty. These students exemplify "scholarship, athletics, and leadership" under the definition of the award.[citation needed] Oakwood High School's yearbook is The Acorn, and its newspaper is The Dome.

Oakwood's educational system places a strong emphasis on post-secondary education. Oakwood High School is a national school of excellence.[citation needed] Oakwood High School's English, mathematics, natural science, and foreign language courses are matched by many performing arts opportunities for its students. It is not uncommon for Oakwood's top academic graduates to gain acceptance to some of the most selective universities and colleges in the United States and the world.[9] Most graduates, however, attend schools within a 300 mile radius, with a large percentage remaining in Ohio. Oakwood High School is consistently ranked as one of the top 10 academic institutes in Ohio as well as one of the top 400 in the United States.[citation needed]

Much of the community's unity[citation needed] centers around the city schools. Sporting events, plays and musicals are generally well attended by the city's adults. The quality of the Oakwood School District attracts many families and in turn keeps real estate values high in spite of[citation needed] the aging housing base. Oakwood voters generally support property tax raises in order to keep the schools well maintained which in turn help to keep property values high.[citation needed] 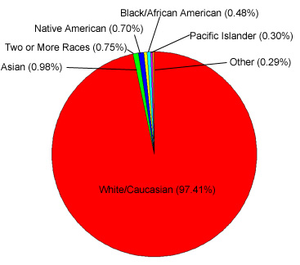 Chart of the Oakwood Racial Makeup as of the 2000 Census

There were 3,633 households out of which 38.2% had children under the age of 18 living with them, 61.8% were married couples living together, 8.0% had a female householder with no husband present, and 28.5% were non-families. 26.3% of all households were made up of individuals and 11.1% had someone living alone who was 65 years of age or older. The average household size was 2.53 and the average family size was 3.08.