A microwave power meter is an instrument which measures the electrical power at microwave frequencies.

Usually a microwave power meter will consist of a measuring head which contains the actual power sensing element, connected via a cable to the meter proper, which displays the power reading. The head may be referred to as a power sensor or mount. Different power sensors can be used for different frequencies or power levels. Historically the means of operation in most power sensor and meter combinations was that the sensor would convert the microwave power into an analogue voltage which would be read by the meter and converted into a power reading. Several modern power sensor heads contain electronics to create a digital output and can be plugged via USB into a PC which acts as the power meter.

Microwave power meters have a wide bandwidth—they are not frequency-selective. To measure the power of a specific frequency component in the presence of other signals at different frequencies a spectrum analyzer or measuring receiver is needed. 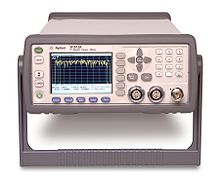 There are a variety of different technologies which have been used as the power sensing element. Each has advantages and disadvantages.

Thermal sensors can generally be divided into two main categories, thermocouple power sensors and thermistor-based power sensors. Thermal sensors depend on the process of absortbing the rF and microwave signal energy, and sense the resulting heat rise. Therefore they respond to true average power of the signal, whether it is pulsed, CW, AM/FM or any complex modulation. (Agilent 2008). Thermocouple power sensors make up the majority of the thermal power sensors sold at present. They are generally reasonably linear and have a reasonably fast response time and dynamic range. The microwave power is absorbed in a load whose temperature rise is measured by the thermocouple. Thermocouple sensors often require a reference DC or microwave power source for calibration before measuring; this can be built into the power meter. Thermistor-based power sensors such as the Agilent 8478B are generally only used in situations where their excellent linearity is important, as they are both much slower and have a smaller dynamic range than either thermocouple or diode-based sensors.Thermistor-based power sensors are still the sensor of choice for power transfer standards because of their DC power substitution capability (Agilent 2006). Other thermal sensing technologies include microwave calorimeters and bolometers,and quasi-optic pulsed microwave sensors.

Many microwave power heads use one or more diode(s) to rectify the incident microwave power, and have extremely fast response. The diode would generally be used in its square-law region and hence give an output voltage proportional to the incident RF power. In order to extend their dynamic range beyond the square-law region, linearity correction circuits or multiple diode stacks are used. With advancement in comprehensive data compensation algorithm and diode stacks topology, diode sensors like the Agilent E9300A is able to respond properly to complex modulated signals over a wide dynamic range. (Agilent, 2006)

Like thermocouple sensors, they often require a reference source.

Other technologies have been investigated or implemented for use as power sensors but are not widely used today; these include torque-vane, electron-beam, MEMS, Hall effect and atomic fountain based sensors.

The three main types of microwave power meters are