Martin may either be a surname or given name.

Martin is a common given and family name in most European languages. It comes from the Latin name Martinus, which is a late derived form of the name of the Roman god Mars, the protective godhead of the Latins (and therefore the god of warring).[1] The meaning is usually rendered in reference to the god as "of Mars", or "of war/warlike".

It has remained a popular given name in Christian times, in honor of the Catholic saint Martin of Tours; it is also the most common French surname. One well-known Irish family are called Martyn. Along with its historic Catholic popularity, it has also been popular among Protestants due to Martin Luther. In addition, Black American children are often given the name in honor of Martin Luther King, Jr. 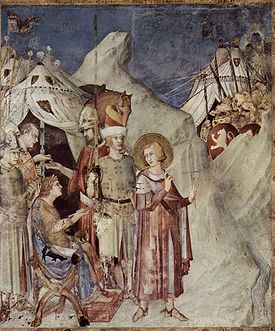 St Martin of Tours, the patron saint of soldiers, leaves the life of chivalry and renounces the army. St Martin is one of the most familiar and recognizable Roman Catholic saints.

With over 230,000 people holding the surname Martin in France, it is the most common French surname.[2] The origins of its frequency can be attributed to Saint Martin of Tours, who was the most popular French saint, but the reason is not clear.[3]

Martin was never a common given name (Christian name) in the Middle Ages, like Bernard or Thomas (which were later officialized and became common surnames, nowadays ranking second and third respectively). Onomastics have tried to find other reasons for Martin's popularity, by examining, for example, the repartition of place names, but this explanation also lacks empirical support.[4]

It can be a late surname connected with children of orphanages, like Alexandre, which was never a common first name in the Middle Ages but now appears quite frequently as a surname. Martin can represent charity towards orphans.

After the Norman invasion of Ireland in 1169, numerous new, unrelated bearers of the name from Britain and France, settled in Ireland.

The most well-known Irish family of the name were the Martyn family, who were counted among The Tribes of Galway.

There are several groups of Martins or Macmartins in Scotland. The MacMartins of Letterfinlay appear to have allied themselves to the Clan Cameron in the late 14th century, and finally merged with the Camerons after the Battle of Lochaber in 1429. The Martins in Skye are traditionally associated with Clan Donald, and the Lothians were home to a powerful 'de St Martin' family from the 12th century. In Ireland there are at least three major families bearing the name "Martin" [5]; one being of foreign origin and the latter two, indigenous Irish clans. There are many mottos and arms registered by various Martins throughout the British Isles. The motto of Abraham Martin of Cleveragh and Bloomfield, County Sligo, was "Hinc Fortior et Clarior", which translates as: "... hence stronger and more illustrious". This same motto was registered by another Martin in Edinburgh, 1672.[6][7]

An Anglo-Norman knight named Robert fitz Martin, born in the late 11th century, settled in England's West Country, on lands inherited from a grandfather, and later participated in the invasions of Wales, where he was awarded the barony of Cemais, located between Fishguard and Cardigan. Robert fitz Martin established the caput of his barony at Nanhyfer or Nevern. Robert's son William fitz Robert fitz Martin (born c. 1155) inherited the family's property and re-established family control over Cemais, which had been lost to the Welsh. The senior line became extinct in 1326, but cadet lines still flourish in England, Wales, Ireland and elsewhere.

Martin was the sixteenth most frequently reported surname in the 1990 United States Census, accounting for 0.27% of the population.

They generally mean "descendant of Martin".

Those people who are known primarily by the name "Martin" are listed below. Other notable people sharing this given name can be found through consulting all pages that begin with the prefix "Martin".