Autoroute 15 (also called the Décarie Expressway (English) or Autoroute Décarie (French) between the Turcot and Décarie Interchanges in Montreal and the Laurentian Autoroute (English) Autoroute des Laurentides (French) north of Autoroute 40) is a highway in western Quebec, Canada. It was, until May 2011, the only constructed north-south autoroute to go out of Montreal on both sides. A-15 begins at the end of Interstate 87 at the United States border at Saint-Bernard-de-Lacolle to Sainte-Agathe-des-Monts with an eventual continuation beyond Mont-Tremblant. The total length of A-15 is currently 164 km (101.9 mi), including a short concurrency (4 km/2.5 mi) with Autoroute 40 (Boulevard/Autoroute Métropolitan) that connects the two main sections. This is one of the few autoroutes in Quebec that does not have any spinoff highways. 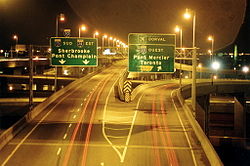 Autoroute 15 in Montreal, facing southwards at the Autoroute 20 junction (Exit 63)

The southern section of A-15 connects the south shore suburbs of Montreal and is also the primary trade corridor route between Montreal & New York City linking Quebec Autoroute 15 to Interstate 87 at the Canada-United States border. This was the former Route 9, and connected with US 9 on the western shore of Lake Champlain. In Brossard, it joins up with A-10 and A-20 across the Champlain Bridge into Montreal. The A-10 splits off almost immediately after crossing the bridge to head into downtown Montreal at the Bonaventure Expressway and the A-20 splits off shortly after at the Turcot Interchange (échangeur Turcot), leaving the A-15 to continue northward as Autoroute Décarie until the Décarie Interchange (échangeur Décarie) with the A-40 at the point where it turns from the Trans-Canada into the Metropolitan Expressway. 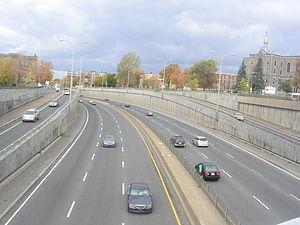 The Autoroute Décarie is a sunken highway between the northbound and southbound lanes of Décarie Boulevard (hence the name); from boulevard Métropolitain at its northern end to Monkland Avenue and the Villa Maria Metro station at its southern end. It was built on a wide expanse of vacant land, donated to the City by the Décarie estate on the condition that only a streetcar line be established. The decommissioning of the streetcar system in 1959 left the right-of-way as an obvious choice for a highway, and so the Décarie Autoroute was dug there. South of Queen Mary Road, however, were a significant number of houses which were demolished. In order to avoid demolishing the Notre-Dame-de-Grâces church, the highway makes a slight westerly jog below Côte-Saint-Luc Road and runs through a short tunnel, before emerging between Addington and Botrel Streets and running down to Sherbrooke Street and Saint Jacques Street, where it spectacularly goes from below-ground to well above ground as it intersects with Autoroutes 20 and 720 in the infamous Turcot Interchange (dubbed "Spaghetti Junction" by train crews operating the former CN Rail Turcot Yard). Following the conversion from streetcar line to highway, the Décarie Estate unsuccessfully sued the city but was unable to prevail because they did not document their case well enough for the nevertheless sympathetic court.

This part of the highway was the site of a spectacular event on the 14th of July 1987. During the Montreal Flood of 1987, over 100 mm fell over the central part of the Montreal island and a large part of it ended up in the sunken highway, transforming it into a river. One person died from drowning.

Decarie Boulevard itself continues from Monkland Avenue south to Saint Jacques Street and from Autoroute 40 north into Ville Saint-Laurent past Du College Station and Côte-Vertu Station/Norgate shopping centre. It is considered by some to be Montreal's historically worst urban planning fiascos.[4]

After its concurrency with A-40, the northern section of A-15 is the main freeway route to the Laurentians until it downgrades to Route 117. It also links up to the northern suburbs of Montreal, as well as provides a connection to the A-440, A-640 and the A-50 in Mirabel. The first section from A-40 to Saint-Jérome was opened in 1958 as a toll road, although the tolls were later removed. This section was also the first to be designed as an autoroute in the province. It was named Autoroute Montréal-Laurentides during the 1960s.[5]

Over the next years, it was extended north to Sainte-Agathe-des-Monts as a new connection to touristic and skiing destinations in the Laurentides including in Saint-Sauveur, Sainte-Adèle, Mont-Gabriel and Estérel. In the future, it is possible that the A-15 may continue even farther north, past Mont-Tremblant, as Route 117 is already an at-grade expressway with a freeway bypass of Saint-Jovite completed, and the name Autoroute des Laurentides is also recognized on the freeway bypass (and exit numbers continue). This section is numbered separately from the southern section as if it were a different route. The northern route is also part of the Trans-Canada Highway.

On July 14, 1987, a sudden torrential downpour caused by an HP supercell thunderstorm dumped over 100 millimetres (4 inches) of rain in just over one hour across the city. The Décarie Expressway, which is below-grade, was heavily flooded and became a river. At some locations, the water reached a maximum of 3.6 metres in depth on the roadway. Over 300 vehicles were abandoned when they were submerged. Two people were killed by the storm.[6] One 80-year-old man on the Expressway drowned and another one was killed by electrical wires.

On July 5, 2005, another torrential downpour flooded portions of the Expressway after several manhole covers blew over.[7]