A trio of battle droids from The Phantom Menace

Battle Droids (B1) are a fictional, robotic combat unit used in the Star Wars Universe. Though developed earlier, battle droids served as frontline units in the Trade Federation Army and for the Confederacy of Independent Systems during the Clone Wars era. They were mass produced on Confederate planets such as Geonosis, and some units survived into the Galactic Civil War and Legacy era. Battle droids were originally made by Trade Federation Viceroy, Nute Gunray, to prevent pirate attacks. When he was contacted by Darth Sidious, he attacked the peaceful planet of Naboo. The droids easily overwhelmed Naboo's military and put the people in camps where many died.

The Battle droid's appearance is based on the skeleton of the Star Wars species Neimoidian.[1] Battle droids are designed to win through overwhelming numbers, even though a swarm of battle droids can be cut down by only a few Jedi Knights, as shown several times in the prequel films. Despite this, enough droids can take down many Jedi, as seen in the Episode 2 Geonosis arena battle.

Battle droids were originally portrayed as being controlled by a large central computer, usually located on a heavily defended starship. If the central computer is destroyed, all battle droids under its control would cease to function. This occurred during the Battle of Naboo in Star Wars Episode I: The Phantom Menace, when Anakin Skywalker destroyed the Droid Control Ship. The monumental defeat spurred interest in independent droids, and this technique was put into action following the defeat. To combat this, the Trade Federation programed a short list of commands for the droid to complete if their command system is destroyed.[2]

Super battle droids were bulkier, stronger and smarter versions of the droids, which were created for combat after the Battle of Naboo and brought more firepower to the jedi. In Revenge of the Sith, all battle droid units were ordered deactivated by Emperor Palpatine in order to create his empire. Many of the clones died during the wars and were replaced by Stormtroopers. Gizor Delso, a Geonosian Separatist who survived Darth Vader's slaughter, designed a third kind of battle droid during an uprising, but the plans were destroyed by Imperial stormtroopers.[3]

Known sometimes as Droid Snipers, these droids featured red shoulder or camo markings. They were programmed to hunt the enemy's commanders or leaders, using accurized Sniper Rifles. They were rarely seen in the movies,but were common in the Battlefront Series and the Clone Wars animated series.The bounty hunter IG-88 was one.

Built in the Cathedral Factories of Charros IV, Vulture Droids were used first by the Trade Federation, then by the Confederacy of Independent Systems. The Vulture Droid is a walker unit that can convert to a flight mode, allowing it to navigate space (much like a starfighter). In fighter mode they have blasters concealed within their wings - these wings unfold into 4 spider-like legs in walking mode. They are large units and, like many other battle droids, they attack through numbers. Like other Trade Federation droids, they are controlled remotely by a central computer. The Vulture Droid forms the staple unit of the CIS navy. They first had a brown and tan colour scheme (Episode I), then became a light blue (Episode III). In Star Wars: Battlefront, this droid was a vehicle instead of a playable droid.

Used in the Battle for Geonosis, the Hailfire Droid is an artillery droid designed for fast travel over rough terrain. It uses two large hoop-like wheels to navigate terrain, and is armed with shoulder-mounted rocket launchers. The 32 rockets can be identified by the thick black exhaust they leave behind. They are among the most destructive droids used in the CIS army, but have the distinct weakness of having a low ammunition capability, because they use projectile weapons rather than blasters or lasers. Whenever the droid exhausts its munitions it must retreat with only a small front laser to defend itself.

Just like the Vulture Droid, this droid is considered a vehicle in the Battlefront series. 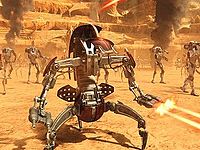 Droideka in Star Wars Episode II: Attack of the Clones

The Droideka, or Destroyer Droid heavy infantry unit are seen in the prequel films. These droids can transform, appearing first in a "wheel" state allowing rapid movements and easy storage, then unfold into insect-like attack-robots with a slow three-legged gait. In their walking state, droidekas have powerful twin blasters on each of their arms, extreme accuracy at close range, and a personal shield generator. The droidekas used their shield generators in the prequel movies The Phantom Menace and Revenge of the Sith to protect themselves. These shields make the droidekas very valuable assets on the battlefield, as they are highly resistant to small arms fire including their own (although not strong enough to resist vehicle or starfighter-mounted cannons). Due to their built-in shields and the strength of their blasters, the droidekas give some Jedi Knights pause. The droidekas sometimes have limited speech abilities (In the script and novel-version of Episode I, the Destroyer Droids that attack Qui-Gon Jinn and Obi-Wan Kenobi inside the Droid Control Ship are shown to have spoken, although this is not evident during the actual movie) and their gender would be male or female depending on their programmings, similar to the battle droids. They were deployed on Naboo, as well as Geonosis and Coruscant, and are mainly the property of the Trade Federation and the Confederacy of Independent Systems.

Destroyer Droids actually come in two series: Heavy Units (shielded) and Infantry Units.[citation needed] Infantry Units are not produced with shields because tactically their shields can be of hindrance to their own infantry trying to fire at the enemy, and also to drastically reduce cost. 40 Infantry Type droidekas can be transported in the Open Chamber type MTT. The droideka can fire up to 240 dual blasts a minute (with a built-in blaster coolant system) making it virtually impossible for enemy infantry to defeat a squad of them in good time (even if they aren't shielded). However, if the droidekas' opponents "circle" around them or are immediately in front of and between the blasters the droideka will not be able to hit them. In The Phantom Menace, when the droids are first seen, they drop their shields as they pursue the fleeing Jedi. This was either because the shield was a hindrance to movement, or because they were attacking a fleeing enemy with no way of attack. In one episode of The Clone Wars, some Droidekas were able to fire while rolling. 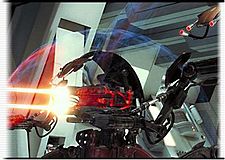 According to the expanded universe, the original design was developed by the insectoid people of Colla IV, who were displeased by the limitations of Baktoid Combat Automata's basic battle droids, and chiefly manufactured there. The Colicoids prefer to have their droidekas free-thinking unlike the Trade Federations methods of controlling the droid via ship computer, so most droidekas who are native to Colla IV are free-thinking. The Trade Federation, and presumably the Confederacy, used trading in rare meats as a way to ease bargaining with the ravenously carnivorous Colicoids, and were able to get special rates on these special infantry droids. Before the Federation's defeat at Battle of Naboo, these droids were usually slaved to a central computer, although this technique fell out of favor in the aftermath of this battle. Although the droids are not shown en masse in the films (mainly Attack of the Clones and Revenge of the Sith), they were still mass-produced (in comparable numbers to Super Battle Droids) with full specifications. A droideka made a rare post-prequel era appearance in Survivor's Quest, where it proved a formidable opponent for Luke Skywalker and his wife, Mara Jade. The Expanded universe media also revealed that the droideka is illegal by Republic codes.

The elite MagnaGuard is a droid built to specifications provided by General Grievous. They wield electrostaffs made from Phrik Alloy, which cannot be cut through with a lightsaber, and appear to come in at least two varieties. Some simply project energy or electrical fields from both ends, and some have the added ability to shoot mini-missiles from either end.The missiles come from a missile launcher called a Bulldog CRC. They are unique among droids as they have reflexes "operating at almost the speed of light". Nute Gunray, the head of the Trade Federation, claims that these droids cost a fortune to make unlike any droid created from the past. These droids were used during the end of the Clone Wars. On Kashyyyk, Delta Squad had to battle these droids, learning that they had remarkable acrobatic ability and superb stamina, also considerable durability as it took many shots from a DC-17 to take one down.

MagnaGuards were also seen in Episode III: Revenge of the Sith and during the Battle of Coruscant, they fought Obi-Wan and Anakin on the bridge of the Invisible Hand. Later on, four of them attacked Obi-Wan at Utapau but were defeated before they could strike a blow when Obi-Wan used the Force to drop part of the roof on them. Throughout the Clone Wars, one can conclude that MagnaGuards were superior to any infantry droid ever made because of their superior duranium armor, their ability to "feel" what surrounded them, backup processors, and their ability to wield a variety of deadly weapons as well as fight like the Jedi. Unlike the other droids, MagnaGuards can still fight if their head is cut off, thanks to a third eye centered in their stomachs. Their colors are alabaster, blue, red and a very rare grey, which are never seen in the movies but are mentioned in the Expanded Universe media; alabaster directly serve General Grievous, blues act as saboteurs, reds are elite soldiers, and the purpose of the grey are shown in Star Wars Battlefront 2 as infantry soldiers. In this video game, MagnaGuards also carry handheld rocket launchers called Bulldog RLR's, radiation launchers that appear to fire grenades or mortars, a recon droid that can be deployed, and a powerful neuro-poison than can kill surrounding enemy units.

The Cortosis Battle Droid is an improved version of the Super Battle Droid, armored with its namesake, a rare mineral only found on the planet Dxun. Being difficult for Jedi to destroy (Cortosis shorts out lightsabers), they were rushed into mass production during the Clone Wars. It fell to Anakin to destroy the factory that produced them, and during this mission, he discovered a critical weakness in their design; a small gap that ran vertically in their torso armor. After his success, no more Cortosis Battle Droids were produced.

Buzz droids are a small spider like droid used by the Confederacy of Independent Systems. Buzz Droids deal damage by latching onto enemy starships and use cutting tools to break through the hull to disable or destroy the ship. They are deployed inside of missiles that instead of carrying explosive ordinance, carry numerous Buzz Droids. These missiles can be fired by droid Tri-Fighters or Vulture Droids. They are used during the Clone Wars and appear only in Star Wars Episode III: Revenge of the Sith during the battle of Coruscant.

Grapple droids resemble larger versions of the Super Battle Droid (SBD). They are more heavily armored than the SBD, and about 1.5 times the height. They lack standard blasters, but instead have electrically charged blades over their hands. When crossed over the droid's torso, these blades provide considerable defense against lightsaber attacks. Grapple droids either attack with the blades, or grab their opponent and try to crush him/her in their arms. The Grapple droid did not appear in any of the films, but is a common character in the Revenge of the Sith video game.

The B2 Super battle droid is an inproved version of the B1 battle droid. It has first seen in the Episode II, in Geonisís Arena.