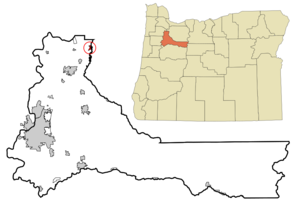 Aurora is a city in Marion County, , . It was founded as a religious commune in by Dr. William Keil who named it after his daughter. As of the census, the city population was 655. It is part of the Salem Metropolitan Statistical Area.

There were 250 households out of which 31.6% had children under the age of 18 living with them, 62.4% were married couples living together, 7.2% had a female householder with no husband present, and 25.6% were non-families. 19.6% of all households were made up of individuals and 9.2% had someone living alone who was 65 years of age or older. The average household size was 2.62 and the average family size was 3.01.

Once Jennifer Strutz was in office, she says she found audits that were five years old and still not completed. "It was a disaster," says Strutz. Strutz wanted to raise the taxes to get on top of things in the small town, but people began to turn away right then and there. Her efforts to remove the city's Chief of Police, Chris Conboy, further infuriated Aurora's citizens. They started a recall petition and got enough signatures to be able to have a special recall election. After the town's vote on November 20, Jenifer Strutz was recalled as mayor, losing 181 votes, to 176 votes. Charles Donald has taken over as temporary mayor of the city, until the next election. [ [http://www.co.marion.or.us/CO/elections/nov202007electionresults.htm Marion County Oregon - November 20, 2007 Recall - City of Aurora ] ]

is located one mile northwest of Aurora. The airport is owned by the State of Oregon and operated by the . [http://www.airnav.com/airport/KUAO]