Clusium was an ancient city in Italy, one of several found at the site. The current municipality of Chiusi (Tuscany) partly overlaps this Roman walled city. The Roman city remodeled an earlier Etruscan city, Clevsin, found in the territory of a prehistoric culture, possibly also Etruscan or proto-Etruscan. The site is located in northern central Italy on the west side of the Apennines.

By the time it appears in the Livy's History, it is already a major Etruscan city being petitioned for assistance against the republican partisans of ancient Rome. About its life prior to that time, Livy only makes a brief statement (10.25) that it was once called Camars.

Different theories exist of the city's origin. Pottery from the pre-Etruscan Italian civilization, Villanovan, has been found at Chiusi. One common type is an urn for the ashes resulting from cremation dating to the 8th century BC. The urns are in the shape of wattle-and-daub huts with thatched roofs, presumably the homes of the deceased. This style of architecture is so different from classical Etruscan that many Etruscologists have denied a continuity. On the other hand, it is clear that the people of the region received a strong impetus from Greek colonies such as Cumae and from Greek immigration.

The minority theory is currently the Proto-Italic. In this theory, Etruscans from the coast or from the Aegean resettled and renamed an Umbrian city called Camars, which the exponents believe means "marshland" in Italic. On enclosing the city with a wall they changed the name to "enclosure", using an Etruscanized form, Clevsin, of the perfect passive participle, clusus, of Latin cludere, "to close".

Clevsin and Camars are more comfortable in their Etruscan milieu as Etruscan words. The limited known Etruscan vocabulary includes camthi, the name of a magistracy, which might be segmented cam-thi, where –thi is a known locative ending. Ar, -arasi, -aras are plural endings of different cases. A cleva is an offering. S and -isi are genitive and dative endings. A place of magistracies or offerings is entirely harmonious with Etruscan culture and the uses of a regional capital city. The final resolution of the question waits for more evidence.

Chiusi is situated on a hill above the valley of the Clanis river near lake Clusium, both of which features had those names in antiquity. The Clanis is part of the Tiber drainage system and was navigable by boat from there. Rome was also accessed by the via Cassia, which was built over an Etruscan road.

The site of ancient Clusium was reoccupied in Roman and later times, obscuring and obliterating much of the Etruscan layers. For example, the ancient sources describe the tomb of Lars Porsena at Clusium as well as the sacking and levelling of the city by Sulla. Much of what remains are its tombs and its underground passages, some of which might have been associated with the monument to Porsena.

Lars Porsena was king of Clusium in 508 BC. Lucius Tarquinius Superbus, formerly king of Rome, had been expelled along with his family from Rome in 509 BC. He had sought to regain the throne, firstly by the Tarquinian conspiracy and secondly by force of arms. Both attempts had been unsuccessful, the conspiracy having been discovered, and Tarquin's army having been defeated at the Battle of Silva Arsia. 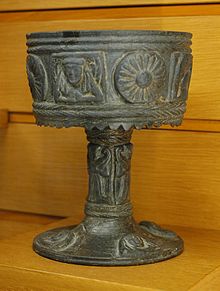 Tarquin convinced Lars Porsena to lead his army against Rome. The war between Clusium and Rome followed, during which Porsena besieged Rome. The siege and the war ended with a peace treaty, by which Porsena received hostages from Rome and returned to Veii lands that had previouly been taken by Rome. In 507 BC Rome's hostages and lands were restored, and peace between Rome and Porsena was cemented. Tarquinius was not restored to the Roman throne. [1]

In 508 BC, after the siege of Rome, Porsena spilt his forces and sent part of the Clusian army with his son Aruns to besiege the Latin city of Aricia. The Clusians besieged Aricia; however the Aricians sent for assistance from the Latin League and from Cumae, and the Clusian army was defeated in battle[2]

Pliny the Elder wrote that a magnificent tomb was built for Porsena; a large mausoleum surrounded by cascades of pyramids over a labyrinth of underground chambers in which an intruder could get lost. Pliny never saw this tomb, so his description was based on a report from Varro and perhaps a conflated comparison to the Minoan labyrinths he describes before this tomb. Large-size tumuli of the late archaic period were built at Chiusi, and modern scholars have tried to associate these (especially Poggio Gaiella) with the legendary tomb of Porsena.

In 2004 Professor of Urban Restoration Giuseppe Centauro suggested that the traditional location of Clusium at Chiusi is wrong and that it is near Florence.[3] As of 2008 he was trying to raise money and get permission to excavate.[4]

In the early 4th century BC (391 BC according to Varronian chronology) it was besieged by Gauls, and the Clusines called upon Rome to intermediate. However, in the following negotiations, one of the Roman delegates, of the gens Fabia, killed a Gallic leader. When the Romans refused to hand over the Fabii and in fact appointed two members of the family as consuls for the next year, the enraged Gauls broke up their siege and under the leadership of Brennus they marched onto and subsequently sacked Rome.