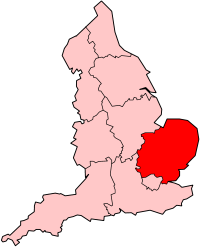 East of England is a of the . It currently elects 7 MEPs using the of .

The constituency corresponds to the region of the .

# Kerr was expelled from the Labour Party in December 1997 and then joined the .