Defense of Brest Fortress
This article is about a 1941 battle between Germany and the USSR. For Polish-German battle of 1939, see Battle of Brześć Litewski.

The defence of Brest Fortress took place 22–30 June 1941. It was one of the first battles of Operation Barbarossa. The Brest Fortress was defended by the Red Army against the Wehrmacht, held out longer than expected, and became a symbol of Soviet resistance during the Second World War. In 1965 the fortress received the title of Hero Fortress for the 1941 defense.

The area around the nineteenth-century Brest Fortress was the site of the 1939 Battle of Brześć Litewski, when German forces captured it from Poland during the Polish September Campaign. However, according to the terms of the 1939 German-Soviet Nonaggression Pact the territory around Brest as well as 52 % of the then Poland was assigned to the Soviet Union.[3] Thus, in the summer of 1941, the Germans had to capture the fortress yet again - this time from the Soviets.

The Germans planned to seize Brest and the Brest Fortress which was located in the path of Army Group Centre during the first hours of Operation Barbarossa. The fortress and the city controlled the crossings over the Bug River, as well as the Warsaw–Moscow railway and highway.

The 3,500-strong defending force comprised regular soldiers, border guards and NKVD men.[4] Soviet soldiers belonged to the elements of the 6th (under Colonel Mikhail Popsuy-Shapko) and 42nd Rifle Divisions (under General Ivan Lazarenko),[5] the 17th Frontier Guards Detachment of the NKVD Border Troops and various smaller units (including the garrison hospital and a medical unit) inside the fortress (up to a total of 7 to 8,000 people.) [3] There were also 300 families of servicemen inside as well.

The map from the secret appendix to the Molotov-Ribbentrop Pact showing the new German-Soviet border after September 1939; the town of Brest can be seen as located on next to the border.

The fortress had no warning when the Axis invaded on 22 June 1941, and became the site of the first major fighting between Soviet forces and the Wehrmacht which surrounded the fortress. From the first minutes of the invasion, Brest and Brest Fortress were bombed and shelled by the German Wehrmacht. The initial bombardment took the unprepared fortress by surprise, inflicting heavy material and personnel casualties.[7] Fierce battles were fought at the border, in the town of Brest and in the fortress itself. The first German assault on the fortress took place half an hour after the bombardment started; the surprised Soviet defenders were unable to form a solid front and instead defended isolated strongpoints–the most important of which was the fortress itself. Some managed to escape the fortress; most were trapped inside by the encircling German forces. Despite their surprise, the subsequent attempt by the Germans to quickly take the fortress with infantry stalled, and the Germans started the 9 day siege.[6] Regarding the fights around Eastern Fort, that was taken only on June 30, 1941, the commander of the 45th Infantry Division General Fritz Schlieper wrote to the High Command in his detailed report:

Although the Soviet soldiers in the opening hours of the battle were stunned by the surprise attack of the heavily outnumbering enemy, being short of supplies and cut off from the outside world, they held out much longer than the Germans expected. The Germans deployed various powerful guns, rocket mortars 15 cm Nebelwerfer 41, resorted to tear gas and flame throwers but could not break Soviet resistance. The civilians inside the fortress looked after the wounded, reloaded the machine-gun discs and belts with cartridges and even took up rifles to help defend the fortress. Children brought ammunition and food supplies from half destroyed supply depots, searched for and brought weapons and watched enemy movements.[6]

Schlieper wrote in his detailed report that:

On 24 June, with Germans having taken parts of the fortress, the remaining Soviet troops were able to link up and coordinate their actions under the command of Major Ivan Zubachov; his second in command was political commissar Yefim Fomin.[1] On 26 June the Soviet forces tried to break out from the siege but were unsuccessful and sustained heavy casualties. On 27 June, after a week of assault, the Germans began to use 540 millimeter artillery which fired 1.25 tonne shells and two 600-millimeter guns Karl-Gerät which fired concrete-piercing shells weighing over 2 tonnes. Shells from the 600-millimeter guns formed craters 30 meters wide and inflicted gruesome injuries on the defenders, including ruptured lungs of defenders hidden deep within the fortress from the concussive force of the explosions.[9] On 29 June-30 June Germans launched a major assault, which penetrated deep into the fortress and resulted in the capture of both Zubachov and Fomin. Zubachov was sent to a POW camp where he died along with several million of his countrymen; Yefim Fomin was executed on spot for being a commissar and a Jew.[10] 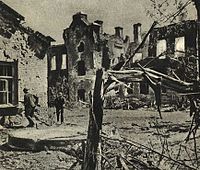 German soldiers in the Citadel in June 1941

The magnitude of these losses can be judged by the fact that the total German losses on the Eastern front up to 30 June 1941 amounted to 8886 killed. The citadel of Brest therefore accounted for over 5 percent of all fatal casualties.[11]

After nine days of fierce fighting the Germans had captured most of the fortress. It meant that the strategic objective was accomplished with a considerable delay and losses. The German High Command demanded General Fritz Schlieper present a detailed report regarding combats by Brest 22–30 June 1941. It was made on July 8, 1941.[12] A copy was found in the archive of the 45th Infantry Division, that was captured by the Red Army by Livny, Russia in March 1942.[12]

To be fair, the date June 30, 1941 as the end of the battle for the Brest Fortress is not quite correct. Even after the fortress was declared as captured, and with the front lines hundreds of kilometers eastward, surviving cells of resistance were not put down by the Germans for a month. Fighting still continued in isolated pockets, primarily underground in the old dungeons, in the Citadel and the Kobrin Fortification. From late June until the very end of July rifle fire and short bursts of machine-gun fire continued to ring out from basements and half-destroyed dungeons with small groups and individual soldiers inside. The actual front had by then already moved about 300 miles (480 km) east.[4] During the last days, the remaining defenders made inscriptions on the walls. They said:

Major Pyotr Gavrilov, one of the best known defenders of Brest (later decorated for it as Hero of the Soviet Union) was captured only on 23 July.[10][13][14] There were reports that isolated defenders were weeded out by Germans as late as in August when Hitler and Mussolini visited the fortress with heavy security to protect them from remaining defenders. It is claimed that a stone Hitler picked up from the remains of a bridge was found in his office at the 3rd Reich's headquarters after the war[9][14] To eliminate last pockets of resistance German High Command had given orders that the fortress cellars be flooded with water from the Bug River.[14] 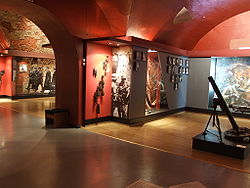 Museum of the defense of the Brest Fortress, 6th room, dedicated to the fights for the citadel

The resilience of the fortress defenders did not significantly affect the early German successes as the Wehrmacht rapidly advanced into the Soviet territory largely according to the German plan, leaving the fighting fortress well behind the front line.[4] The Soviet General Staff, however, realized the importance of fiercely defending towns and villages on the way of the enemies advance as evidenced in its November note.[4]

In the post-Stalin era both the fortress and her defenders were rehabilitated and the Soviet propaganda built on the defenders' heroism and examples of individual hold-outs creating a myth that an organized defense of the fortress lasted for about a month, containing the German advance (for example, Great Soviet Encyclopedia claimed that "For almost a month the heroes of the Brest Fortress contained the attack of the whole German division").[16] That exaggeration persists to the modern time in some sources; for example, a 2006 article by Russian government official outlet, Voice of Russia, stated that "Even after a month of fighting, the Brest fortress held out, engaging a significant part of the enemy’s forces and wearing them out.".[17]

a ^ While organized resistance ceased by 30 June, smaller pockets of resistance in the fortress undergrounds lasted for weeks.

b ^ Pleshakov notes (p. 242): "With the exception of Gavrilov [commander of the 44th Infantry Regiment], all the commanders of the troops were self-appointed. On the morning of 22 June, rank ceased to matter, and whoever was able to issue a sane order and persuade others to carry it out was acknowledged as a leader."

c ^ Pleshakov notes (p. 242): "It is unclear to this day how many people remained inside the fortress on the morning of 22 June, but it was probably about three and a half thousand". Hence the number of 7,000-8,000 probably refers to the entire garrison, before parts made it outside the fortress and were either defeated or forced to retreat outside Brest.