The Marangoni effect (also called the Gibbs–Marangoni effect) is the mass transfer along an interface between two fluids due to surface tension gradient. In the case of temperature dependence, this phenomenon may be called thermo-capillary convection[1] (or Bénard–Marangoni convection[2]).

This phenomenon was first identified in the so called "tears of wine" by physicist James Thomson (Lord Kelvin's brother) in 1855. The general effect is named after Italian physicist Carlo Marangoni, who studied it for his doctoral dissertation at the University of Pavia and published his results in 1865. The most complete early treatment of the subject is due to Willard Gibbs. 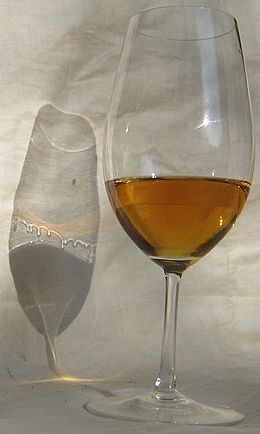 Tears of wine show clearly in the shadow of this glass of wine with a 13.5% alcohol content

As an example, wine may exhibit a visible effect called "tears", as shown in the photograph. The effect is a consequence of the fact that alcohol has a lower surface tension than water. If alcohol is mixed with water inhomogeneously, a region with a lower concentration of alcohol (greater surface tension) will pull on the surrounding fluid more strongly than a region with a higher alcohol concentration (lower surface tension). The result is that the liquid tends to flow away from regions with higher alcohol concentration — along the tension gradient. This can also be easily demonstrated by spreading a thin film of water on a smooth surface and then allowing a drop of alcohol to fall on the center of the film. The liquid will rush out of the region where the drop of alcohol fell.

The Marangoni number, a dimensionless value, can be used to characterize the relative effects of surface tension and viscous forces.

A very detailed mathematical treatment of this from the point of view of the Navier–Stokes equations and the equations of thermodynamics can be found in the first third of Subrahmanyan Chandrasekhar's Hydrodynamic and Hydromagnetic Stability, originally published in 1961 by Oxford, and republished by Dover in 1981.

Under earth conditions, the effect of gravity causing density-driven convection in a system with a temperature gradient along a fluid/fluid interface is usually much stronger than the Marangoni effect. Many experiments (ESA MASER 1-3) have been conducted under microgravity conditions aboard sounding rockets to observe the Marangoni effect without the influence of gravity.

The effect of the Marangoni effect on heat transfer in the presence of gas bubbles on the heating surface (e.g., in subcooled nucleate boiling) has long been ignored, but it is currently a topic of ongoing research interest because of its potential fundamental importance to the understanding of heat transfer in boiling.[3]

One important application of the Marangoni effect is the use for drying silicon wafers after a wet processing step during the manufacture of integrated circuits. Liquid spots left on the wafer surface can cause oxidation that damages components on the wafer. To avoid spotting, an alcohol vapor (IPA) or other organic compound in gas, vapor, or aerosol form is blown through a nozzle over the wet wafer surface (or at the meniscus formed between the cleaning liquid and wafer as the wafer is lifted from an immersion bath), and the subsequent Marangoni effect causes a surface-tension gradient in the liquid allowing gravity to more-easily pull the liquid completely off the wafer surface, effectively leaving a dry wafer surface. A similar phenomenon has been creatively utilized to self-assemble nanoparticles with ordered arrays.[4] Instead, an alcohol containing nanoparticles is spread on the substrate, followed by blowing the substrate with a humid air flow. The alcohol is evaporated under the flow. Simultaneously, water condenses and forms microdroplets on the substrate. Meanwhile, the nanoparticles in alcohol are transferred into the microdroplets and finally form numerous coffee rings on the substrate after drying.

The Marangoni effect is also important to the fields of welding, crystal growth and electron beam melting of metals.[5]