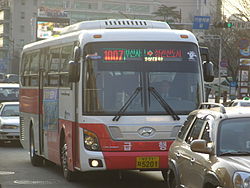 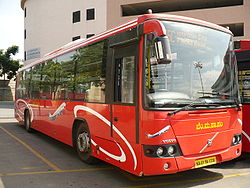 A transit bus (US), also known as a commuter bus, city bus, or public bus, is a bus used for short-distance public transport purposes. The roles and specifications of transit buses are not clear cut, and vary with operator and region.

With the development of bus building technologies and urbanisation, the emergence of specific transit bus features emerged for the different operating conditions compared to other private or public transport bus use.

The features of a transit bus are geared for operation on regular urban or suburban bus routes, with multiple defined stops, in a commuting or short-distance leisure role. This is as opposed to all-seated inter-urban or long-distance coach public transport; shuttle buses; demand-responsive buses such as paratransit, or private-hire bus or coach operations. Increasingly, transit buses are built as low-floor vehicles. 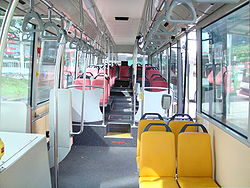 Interior of a wheelchair-accessible transit bus, with bucket seats and smart-card readers at the exit

Generally, a transit bus will have:

Modern transit buses are also increasingly being equipped with passenger information systems, multimedia entertainment/advertising, and passenger comforts such as heating and air-conditioning (as opposed to historically where actually necessary). Some industry members and commentators promote the idea of making the interior of a transit bus as inviting as a private car, recognising the chief competitor to the transit bus in most markets.

As they are used in a public transport role, transit buses can be operated by publicly run transit authorities or municipal bus companies, as well as private transport companies on a public contract or fully independent basis. Due to the local authority use, transit buses are often built to a third-party specification put to the manufacturer by the authority. Early examples of such specification include the 'Greater Manchester' Leyland Atlantean, and DMS-class London Leyland Fleetline. New transit buses may be purchased each time a route/area is contracted, such as in the London Buses tendering system.

The operating area of a transit bus may also be defined as a geographic metropolitan area, with the buses used outside of this area being more varied with buses purchased with other factors in mind. Some regional-size operators for capital cost reasons may use transit buses interchangeably on short urban routes as well as longer rural routes, sometimes up to 2 or 3 hours. Often transit bus operators have a selection of 'dual-purpose' fitted buses, that is standard transit buses fitted with coach-type seating, for longer-distance routes.

Sometimes transit buses may also be used as express buses on a limited-stopping or non-stop service at peak times, but over the same distance as the regular route.

Fare payment is done via

and is done upon

Depending on payment systems in different municipalities, there are widely different rules with regard to which door, front or rear, one must use when boarding/exiting.

For rear doors, most buses have doors opened by the driver controls or patron (with touch-to-open, motion sensor or push bars).

Transit buses can be single-decker buses, double-decker buses or articulated buses. Selection of type has traditionally been made on a regional as well as operational basis; however, with the advent of global manufacturing, all three types can be seen in the same location or country. Depending on local policies, transit buses will have two or three doors to facilitate rapid boarding and alighting.

In cases of low-demand routes, or to navigate small local streets, some models of minibus and small midibuses have also been used as transit type buses.

The development of the midibus has also given many operators a low-cost way of operating a transit bus service, with some midibuses such as the Plaxton SPD Super Pointer Dart resembling full size transit type vehicles.

Due to their public transport role, transit buses were the first type of bus to benefit from low-floor technology, in response to a demand for equal access public service provision. Transit buses are also now subject to various disability discrimination acts in several jurisdictions which dictate various design features also applied to other vehicles in some cases.

Due to the high number of high-profile urban operations, transit buses are at the forefront of bus electrification, with hybrid electric bus, all-electric bus and fuel cell bus development and testing aimed at reducing fuel usage, shift to green electricity and decreasing environmental impact.

Developments of the transit bus towards higher capacity bus transport include tram-like vehicles such as guided buses, longer bi-articulated buses and tram-like buses such as the Wright StreetCar, often as part of Bus Rapid Transit schemes. Fare collection is also seeing a shift to off-bus payment, with either the driver or an inspector verifying fare payments.

A commuter bus service is a fixed-route bus characterized by service predominantly in one direction during peak periods, limited stops, use of multi-ride tickets and routes of extended length, usually between the central business district and outlying suburbs. Commuter bus service also may include other service, characterized by a limited route structure, limited stops and a coordinated relationship with another mode of transportation