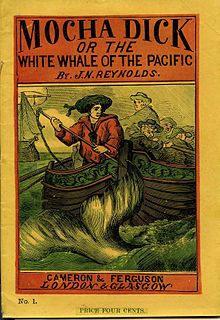 1870 UK reprint, Mocha Dick: Or The White Whale of the Pacific by Jeremiah N. Reynolds, Cameron and Ferguson, London, Glasgow.

Mocha Dick was a notorious male sperm whale that lived in the Pacific Ocean in the early 19th century, usually encountered in the waters near the island of Mocha, off southern Chile. American explorer and author Jeremiah N. Reynolds published his account, "Mocha Dick: Or The White Whale of the Pacific: A Leaf from a Manuscript Journal" in 1839 in The Knickerbocker. Unlike most sperm whales, Mocha Dick was white, and was the inspiration for Herman Melville's 1851 novel Moby-Dick.[1]

Mocha Dick survived many skirmishes (by some accounts at least 100) with whalers before he was eventually killed. He was large and powerful, capable of wrecking small craft with his flukes. Explorer Jeremiah N. Reynolds gathered first-hand observations of Mocha Dick and published his account, "Mocha Dick: Or The White Whale of the Pacific: A Leaf from a Manuscript Journal", in the May 1839 issue of The Knickerbocker, describing the whale as "an old bull whale, of prodigious size and strength... white as wool.[2] According to Reynolds, the whale's head was covered with barnacles, which gave him a rugged appearance. The whale also had a peculiar method of spouting:

Instead of projecting his spout obliquely forward, and puffing with a short, convulsive effort, accompanied by a snorting noise, as usual with his species, he flung the water from his nose in a lofty, perpendicular, expanded volume, at regular and somewhat distant intervals; its expulsion producing a continuous roar, like that of vapor struggling from the safety valve of a powerful steam engine.[3]

Mocha Dick was most likely first encountered and attacked sometime prior to the year 1810 off Mocha Island.[4] His survival of the first encounters coupled with his unusual appearance quickly made him famous among Nantucket whalers. Many captains attempted to hunt him after rounding Cape Horn. He was sometimes quite docile, sometimes swimming alongside the ship, but once attacked he retaliated with ferocity and cunning, and was widely feared by harpooners. When agitated he would sound and then breach so aggressively his entire body would sometimes come completely out of the water.[5]

In Reynolds' account, Mocha Dick was killed in 1838, after he appeared to come to the aid of a distraught cow whose calf had just been slain by the whalers. His body was 70 feet long and yielded 100 barrels of oil, along with some ambergris. He also had several harpoons in his body.