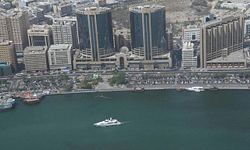 The Dubai route numbering system is a network of highways and roads in Dubai, United Arab Emirates that is managed by the Roads and Transport Authority (RTA). The network comprises 6 main highways and several major and minor inter-city and intra-city roads.

Highways connecting Dubai to other emirates are designated Emirates routes or E-routes. They are identified by an emblem of a falcon, the letter E and a two or three digit number. While within city limits, most roads and highways take alternate names, but are consistently identified by their corresponding E-route number. Six E-routes pass through Dubai, connecting the city with other emirates and towns:[1]

The longest of the E-routes is E 11, which extends the length of the UAE's Persian Gulf coast and connects all emirates, with the exception of Al Fujairah.

D-routes connect localities within the city of Dubai and are identified by the emblem of a fort, the letter D and a two or three digit number. Considerably shorter in length than the average E-route, D-routes provide an intra-city network of roads and streets. D-routes parallel to UAE's coast along the Persian Gulf are numbered evenly, beginning with D 94; the numbers decrease as the network moves farther from the coast. D-routes perpendicular to the Persian Gulf coast are odd numbered and increase as the network moves towards the emirate of Sharjah. Some of the D-routes include:[1] 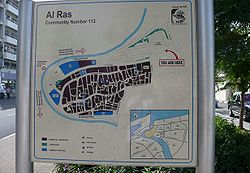 Major roads and streets in the Al Ras locality in Deira.

Major roads typically surround a community or locality within the city and are addressed by a name and a three digit identification number. Streets within a locality are identified with a two digit number. Street numbers are repeated within each locality.[1]