No 204 Squadron was a Royal Air Force squadron formed in 1918 near Dunkerque, France, from No 4 Squadron Royal Naval Air Service, which had already been formed in 1915 and reformed once in 1916. The squadron served during World War I in the roles of bomber, scout and fighter unit. After that war the squadron was reformed as a flying boat unit, a role that it continued till the end of World War II. After World War II the squadron was reformed as a transport unit and as last role it performed duties as a maritime reconnaissance, shipping surveillance and search and rescue unit.

A replica Sopwith 1½ Strutter flying at a 2006 air show 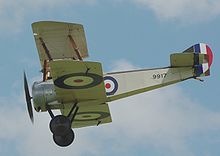 The Shuttleworth Collection's Pup in flight

No 204 Squadron RAF was originally formed from the Dover Defence Flight on 23 March 1915 at Dover as No 4 Squadron RNAS, flying a variety of aircraft. It moved to Eastchurch on 3 August 1915 and the unit was redesignated there as No 4 (Naval) Wing in October. The squadron was reformed on 31 December 1916 at Coudekerque[3] from 'A' Squadron of No 5 (Naval) Wing and was originally equipped with Sopwith 1½ Strutters for the bomber role, but in March 1917 these were replaced with Sopwith Pups and the unit converted to the scout[3] role. June 1917 saw a conversion to Sopwith Camels and the squadron began its role of fighter squadron. Unlike some of its fellow naval units No 4 remained in the coastal zone, flying escort to RNAS bomber aircraft and carrying out offensive patrols along the coast. On Monday 1 April 1918 the squadron, like all other RNAS and RFC units, was absorbed into the newly formed RAF, being stationed at Bray Dunes near Dunkirk at that time.[1] Towards the end of the war No 204 squadron began providing escorts to bombers of the Independent Air Force and carried out ground attack missions against German troops and columns. The squadron stayed for a few months at their last station in Europe, Heule near Kortrijk, Belgium after the Armistice and eventually returned to RAF Waddington in February 1919, disbanding there on 31 December of the same year.[1][3] 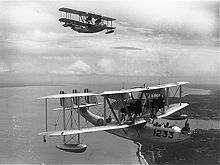 No 204 squadron reformed on 1 February 1929 as a general reconnaissance flying boat squadron at RAF Station Mount Batten, Devon (formerly RAF Cattewater)[8] near Plymouth, equipped initially with five Supermarine Southampton flying boats. At that time the squadron had yearly cruises to train the crews and to provide photographs for the 'Coastal Air Pilot'.[8] 1930 saw a cruise to Dublin and Queenstown, while 1931 brought the squadron to Oban.[8] The squadron took three of its aircraft on a cruise to the Mediterranean in 1932 and in 1933 made a similar flight, starting with four aircraft and flying to Denmark, Sweden, Finland and the Baltic states.[8] 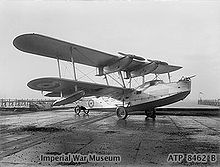 In August 1935 the first Supermarine Scapa arrived to re-equip the squadron and next month No 204 Sqn moved to Aboukir, Egypt during the Abyssinian crisis, while the last Southampton left the squadron by October of that year. The squadron stayed awhile in Egypt, flying patrols to check on Italian shipping. Returning to the UK in August 1936, Saro Londons started replacing the Scapas in October and five of these were taken to Australia in December 1937; due to propeller problems[9] these did not return to the UK until some six months later, in May 1938. In June 1939 conversion to Short Sunderlands began and No 204 squadron was fully equipped with eight of these flying boats by the end of September of that year.[9]

A Saro London II of No. 204 Squadron RAF shown fitted with a dorsal fuel tank 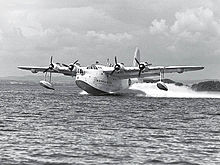 At the outbreak of war No 204 Squadron began patrols over the English Channel and the Western Approaches. When Germany invaded Norway in April 1940, British forces were sent to support the Norwegians and the squadron was moved to Sullom Voe, Shetland to patrol the North Sea and Norwegian coast. The squadron remained in Shetland after the subsequent withdrawal of British forces and the collapse of Norway, but in April 1941 came a move to Reykjavík, Iceland. The stay in Iceland was a short one though and in July 1941 the squadron was sent to Gibraltar and the following month even further south, to Bathurst, The Gambia in West Africa. For the rest of the war the squadron flew anti-submarine patrols along the coasts of West Africa, disbanding at RAF Station Jui in Sierra Leone on 30 June 1945.

On 1 August 1947 No 204 squadron reformed at RAF Station Kabrit, Egypt as a transport squadron and flew with Douglas Dakotas, the military transport version of the well-known Douglas DC-3, until these were replaced by Vickers Valettas in July 1949. On 20 February 1953, the squadron was disbanded by being renumbered to 84 Squadron.

Eleven months later the squadron reappeared as it was reformed on 1 January 1954 at RAF Station Ballykelly as a Avro Shackleton maritime reconnaissance squadron. Several overseas cruises were undertaken, amongst them a successful one to South-Africa to convince them to buy Shackletons for themselves,[10] a trip in 1956 to the Middle East in a transport role and a detachment to Australia from August until November 1957, to support a Nuclear trials task force. The squadron ceased operations at Ballykelly on 1 April 1971. On the same day the squadron number was transferred to the Majunga Detachment Support Unit at RAF Honington and the newly reformed squadron became responsible for the various detachments operating from Majunga, Tengah and Masirah on Search and Rescue (SAR) and shipping surveillance duties.

204 and the UN sanctions against Rhodesia

A Shackleton, possibly of 204 sqn, performing a mail drop over Beira street, September 1971, photographed from aboard HMS Minerva

In 1965, Ian Smith's minority white government of Southern Rhodesia made a Unilateral Declaration of Independence (UDI) in what is now known as Zimbabwe, leading to United Nations sanctions against what was up until then a British colony. One of the major thrusts of this action was to try and deprive the country of oil. Being land-locked, Rhodesia relied on a pipeline through Mozambique from the port of Beira. Up until 1972, the sanctions were applied by the Royal Navy working with the RAF, which undertook reconnaissance flights of the Beira Straits from its airfield at Majunga in Madagascar. The RAF was located at the airfield close to the port of Majunga on the north-west coast of Madagascar. No 204 Squadron was a unit tasked with this responsibility, just prior to the evacuation and closure of the station in March 1972. It operated a detachment of two Avro Shackleton MR.2s. The last flight with these took place on 17 March 1972 and the squadron was disbanded shortly after on 28 April 1972.