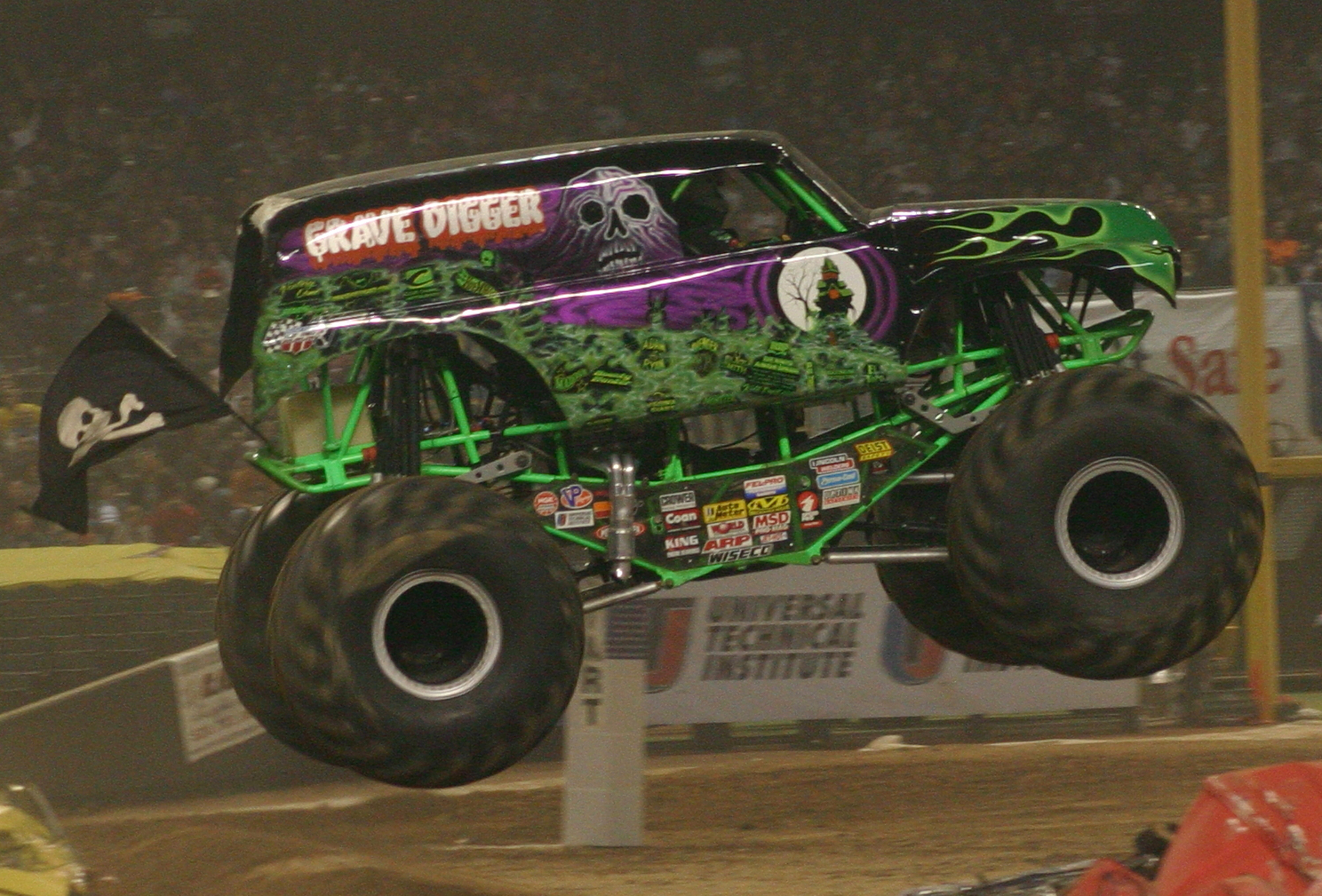 Grave Digger (often referred to as simply Digger) is the name of a team of s currently racing in the series. There are several Grave Diggers being driven by different drivers to allow them to make appearances at more events, but their flagship driver is creator . Arguably the most popular truck currently running, Grave Digger is considered to be one of the most influential monster trucks of all time.

Grave Digger was originally conceived by Anderson as a mud bogger. This first truck was a red 1952 Ford pickup truck, which was later converted to a silver and blue 1951 Ford Panel Truck. The truck received its name when Anderson, amicably trash talking with his fellow racers, said the now famous line, "I'll take this old junk and dig you a grave with it", a reference to the age of his old pickup in comparison to their relatively modern trucks. Anderson gained a reputation for an all-or-nothing driving style and quickly became popular at local events. At one show, a scheduled monster truck failed to show up and Anderson, who already had large tractor tires on the truck, offered to crush cars in the absence of the full-size monster. The promoter accepted and Grave Digger was an instant success as a car crusher and led Anderson to leave mud bogging and pursue monster trucks instead.

In 1986 Grave Digger underwent a transformation to complete monster truck and first received its famous black graveyard paint scheme. In 1987 and 1988 Anderson drove the truck primarily at TNT Motorsports races and became a crowd favorite for driving hard despite lacking major funding that more well known teams, like Bigfoot, had. In 1987, Anderson beat Bigfoot in on a show taped for . It was the first major victory for Grave Digger.

With a points championship now in place, Anderson moved to Grave Digger 2 in 1989, with a new 1950 panel van body. It was during this time that the reputation for wild passes was developed, and the popularity of the truck increased. TNT recognised his rising popularity and began promoting Grave Digger heavily, especially for races on the Tuff Trax syndicated television series. This was helped by Bigfoot not racing for points in the 1989 championship, leaving Grave Digger as the most popular truck on the tour.

When TNT became a part of the USHRA in 1991, Anderson began running on the USHRA tour and debuted his first four-link truck, Grave Digger 3. Throughout the 1990s, the popularity of the truck grew and forced Anderson to hire other drivers to run other Grave Digger trucks. Grave Diggers 4, 5 and 8 were built to suit this purpose, and were never driven in any major capacity by Anderson. Anderson drove Grave Digger 7, a direct successor to 3, for most of the decade. It was replaced by Grave Digger 12, well known as the "long wheelbase Digger", which was also the first Grave Digger with purple in the paintjob.

There have been a total of 20 Grave Digger trucks built. The numbering scheme skips 13 because of .

Grave Digger's origins, the imagery associated with the truck, and the truck's wild reputation, are all considered part of the mystique of the truck and have contributed to its continued popularity. Although originally a Ford, the 1950 Chevy Panel Van body is now considered the traditional Grave Digger body style and is not likely to be changed in the foreseeable future. Likewise, the paint scheme, combining green flames, letters dripping blood, a foggy scene with s bearing names of competitors, a silhouetted by a , and a giant skull shaped mountainside, is considered a part of what Grave Digger is and, although being tweaked over the years, has not strayed far from the first incarnation of the paintwork from 1986.

Perhaps the most visible trademarks are the red s which glow menacingly whenever the truck is in competition. The lights were first used when Anderson was building a transporter out of a and removed the red stop lights. After realizing they would fit in the headlights of the van, he installed them and the truck has had them ever since. During the TNT days, announcer started telling fans that when the red lights were turned on, the truck was 100% ready to run and Anderson was going to go all out. Fans began to take notice and Anderson, who would keep the lights off if one was not working properly, began receiving letters saying that he was not at 100% at certain shows because the lights were not on. To this day, the lights are turned on for every run.

The reputation Grave Digger gained shot the truck to superstardom in the 1980s and continues to draw fans today. In the late 1980s Anderson gained the nickname "One Run Anderson" for his spectacular but often destructive qualifying passes which entertained the crowd but put the truck out of competition for the rest of the event. With the advent of freestyle, Anderson gained a means by which he could entertain the crowd with wild stunts while also focusing on winning races. Today, Grave Digger, no matter which driver is appearing, is traditionally the last truck to freestyle at most events, providing the "grand finale" which caps off the show. These freestyles often end up in rollover crashes, at much higher rates than other trucks. The crowd typically loves to see the wrecks but some criticise the team for what they feel is the glorification of crashing.

The immense popularity of Grave Digger has made it the for Monster Jam, and in some cases monster trucks in general. There is much debate over whether Grave Digger has taken over the title of "Most Popular Monster Truck" from Bigfoot. As a result, the Grave Digger vs. Bigfoot rivalry is one of the strongest in the sport, despite the fact the trucks only race each other a few times each year.