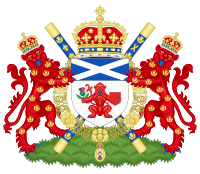 The heraldic achievement of the Office of the Lord Lyon King of Arms.

William David Hamilton Sellar (born 27 February 1941) is a Scottish solicitor and officer of arms. He graduated from the University of Oxford with a degree in history and the University of Edinburgh with a degree in law. He qualified as a solicitor in 1966. In 1968 he joined the Faculty of Law at the University of Edinburgh where he is an Honorary Fellow. He has published on the Lordship of the Isles and on the origins of many Highland families, including the Campbells, MacDonalds, MacDougalls, MacLeods, Lamonts, Maclachlans, MacNeills and Nicolsons. He has been a Member of the Ancient Monuments Board for Scotland and Vice-President of the Society of Antiquaries of Scotland. He has also served on the Council of the Scottish Genealogy Society and the Heraldry Society of Scotland. He has held the office of Bute Pursuivant of Arms since 2001. In 2008, he was appointed Lord Lyon King of Arms.