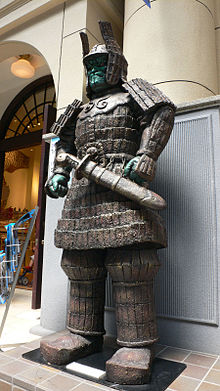 The Daimajin (大魔神?) is a daikaiju (giant monster) from the Daimajin trilogy created by Daiei. All three movies in the trilogy — Daimajin, Return of Daimajin (Daimajin ikaru), and Wrath of Daimajin (Daimajin gyakushu) — were made in 1966, and were released months apart. Daimajin Kanon a new television drama based on the films premiered in Japan in 2010. It features a new Daimajin and takes place in modern-day Japan.

The movie opens with a household of peasants cowering during a series of earth tremors that are interpreted as the escape attempts of Daimajin, a spirit trapped within the mountain. The village gathers at their shrine. This is observed by the local feudal boss, Lord Hanabasa, a good man. It is also observed by his chamberlain, Samanosuke (Yutaro Gomi), a treacherous individual. Samanosuke has been waiting for just such a diversion to stage a coup d'état.

As the villagers pray, Samanosuke and his henchmen slaughter Hanabasa and his wife, but their son and daughter escape, aided by the heroic samurai Kogenta (Jun Fujimaki). Back at the shrine, Samanosuke's men break up the meeting, forbidding all such gatherings in the future. The priestess issues a dire warning, but the men ignore her.

Discouraged, the priestess, Shinobu, goes home, only to find Kogenta and the two children. She takes them up the side of the mountain, into forbidden territory, where the stone idol which is Daimajin stands, half-buried into the side of the mountain. Near this idol is an ancient temple - safe as only Shinobu knows of its existence.

The children grow to adulthood. The son, Tadafumi (Yoshihiko Aoyama) reaches his 18th birthday. The years have been miserable on the villagers. Samanosuke is a brutal leader who is using every man in the starving village as slave labor. The place is ripe for revolution, and surviving Hanabasa retainers are starting to return.

Kogenta journeys to the village to try to gather the old retainers, but gets himself captured. A boy gets word to Tadafumi and his sister, Kozasa (Miwa Takada) that their friend is a prisoner. Tadafumi tries to rescue him, only to discover it's a trap. With both awaiting execution, Shinobu tries to talk to the tyrant, who is drinking too much and becomes incensed at all this talk of the god of the mountain; he murders the priestess—first gouging out her eyeballs with a red-hot fishhook—and orders the idol demolished.

The crew that travels up the mountain to smash Daimajin accidentally discovers Kozasa, and force her to take them to the idol. The soldiers bring out an enormous chisel and proceed to hammer it into Majin's head; they stop when they see blood beginning to drip from the statue. Horrified, the men attempt to flee, but the earth cracks open and swallows them.

Kozasa begs Daimajin to save her brother and punish the wicked Samanosuke. At the fortress, Tadafumi and Kogenta are tied to large crosses, awaiting their fates. Kozasa offers her life to Daimajin and attempts to throw herself over the nearby waterfall, but the rock and earth covering the lower half of the idol fall away, and it walks out into the clearing. Kozasa prostrates herself before it, as the stone mask disappears, revealing the true face of the Daimajin, a vengeful spirit resembling that of a grotesque shogun.

Daimajin goes to Samonosuke's stronghold, which he destroys. After impaling Samanosuke with the chisel from his forehead, Daimajin now turns its wrath upon everyone in sight. Only Kozasa, once more offering her life and letting her teardrops fall on his stone feet, stops its rampage. The spirit leaves the statue, flying away. It collapses into a heap of rubble.

In The Return of Daimajin, the second film in the trilogy, the Daimajin idol has taken up residence on an island in the middle of a lake. The lake is surrounded by two countries, which are known as "happy countries".

The heroes end up on the run as the villains chase them. People keep ending up back on the island with the statue. Eventually, the evil lord has his men shatter the statue with a large amount of gunpowder. Majin's shattered remains end up at the bottom of the lake. True to the samurai formula is the amount of melodrama in Return of Daimajin. Occasionally something paranormal happens, but such occurrences are met rather indifferently. In the final fifteen minutes of the film, Majin finally comes to life and, like his predecessor, inflicts serious damage upon the evil lord and the surrounding landscape.

In the third and final film, the same statue from the first two movies is on top of a mountain rather than on the side. The fathers of some of the local children have been captured by an evil warlord and forced to work in their labor camps. When the four sons decide to go out and save their fathers, they have to cross the Majin Mountain, where the stone god lays sleeping, a notoriously dangerous area full of treacherous terrain, evil samurai, and the angry Daimajin. The four boys are smart enough to pay their respects to the statue when they pass it so that they don't incur the monster's wrath.

Eventually, the warlord's men anger the statue, who once again comes to life and destroys all those who haven't been paying respect to him. The children and their fathers are spared while the work camp is destroyed.

This film is different, politically, from the first two in that Majin is awakened by the pleas of a poor, rural boy rather than by someone of rank, and fights to rescue and avenge common people. None of the heroes in this film are of noble rank, unlike the first two, in which the main protagonists were members of deposed noble families. This proves that Majin only takes side with commoners and is made clear when he kills castle retainers who, though unaffiliated with the villains, are indifferent to the commoners' peril.