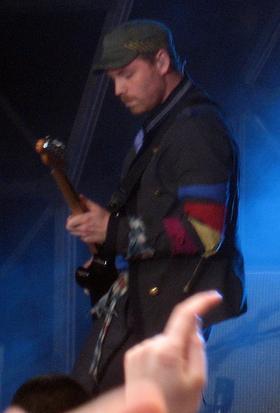 Jonathan Mark Buckland (born 11 September 1977), known as Jonny Buckland, is the lead of the band .

Buckland was born in Islington, , and lived there until the age of four, when his family moved to , . He was encouraged to enter the music scene by his elder brother, Tim, who is a big fan of . Buckland started playing the guitar at the age of eleven, after being spurred on by . Buckland attended in the Welsh town of Mold; moving on to study and at , where he also met his future band mates and formed Coldplay.

Buckland's musical influences include Ride, and . He is noted for his sparse arrangements and use of slide. His stylistic chiming/ringing sound (evident in Coldplay's single "", for example) has led to many comparisons with the playing of 's .Fact|date=June 2008

Buckland has guested on Ian McCulloch's solo album "" and made a cameo appearance with band mate in the film "".

Chris Martin often refers to him as "Jonny Boy" during live concerts, particularly if Buckland is about to do a solo or a long riff. Martin has said, "There would be no Coldplay music without Jonny Buckland.”Fact|date=June 2008 The affection between Martin and Buckland is often evident during live concerts and interviews, always with tongue firmly in cheek. Buckland is the godfather of Martin's daughter, Apple, the other being .

He lives in London with his long-term girlfriend, jewellery maker Chloe Lee-Evans. They have a child together. [cite news|url=http://digital.spin.com/spin/200807/|title=Shine|last=Gross|first=Michael Joseph|date=July 2008|work=Spin|publisher="spin.com"|accessdate=2008-10-06|format=]