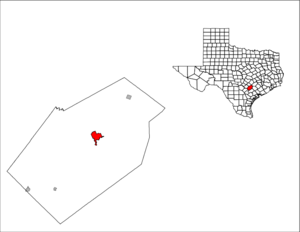 Gonzales is one of the earliest Anglo-American settlements in Texas. It was the first such settlement west of the Colorado River. It was established by as the capital of his colony in August 1825 and named for Rafael Gonzales, governor of , and was known as the .

The original settlement was abandoned in 1826 after two Indian attacks and rebuilt nearby in 1827. The town remains today as it was originally surveyed.

Gonzales is most famous as the "Lexington of Texas" because it was the site of the first skirmish of the . This term is an allusion to the , the first battle of the . In 1831, the Mexican government gave the settlers a small cannon (believed to actually have been a ) for protection against Indian attacks. At the outbreak of hostilities, a contingent of Mexican soldiers was sent from San Antonio to retrieve the cannon. On 2 October 1835, they were met by Texans under the command of John H. Moore. The Texans had fashioned a flag with the words "". The Texans successfully resisted the federal troops in what became known as the .

Gonzales later contributed thirty-two men to the ill-fated defense of the Alamo. It was to Gonzales that , widow of one of the Alamo defenders, and Joe, the slave of , fled with news of the Alamo massacre. General was there organizing the Texas army and anticipated the town would be the next target of General and the Mexican army. He had the town burned and ordered a retreat, thus precipitating the .

In 1839, was born in Gonzales, later to become a well known owner and , and eventually the last known gunfight victim to "Wild Bill" Hickok. The town was derelict immediately after the Texas Revolution, but was eventually rebuilt on the original site throughout the early 1840s. By 1850, it had a population of 300. The "Gonzales Inquirer" was established in 1853 and is one of the six oldest county newspapers still operating in Texas. The population rose to 1,703 in the 1860 , 2,900 by the mid-1880s, and 4,297 in 1900.

There were 2,571 households out of which 36.0% had children under the age of 18 living with them, 47.0% were married couples living together, 15.7% had a female householder with no husband present, and 31.4% were non-families. 28.2% of all households were made up of individuals and 16.5% had someone living alone who was 65 years of age or older. The average household size was 2.73 and the average family size was 3.35.

The City of Gonzales is served by the .

As from 2000 onwards serves the city and county.

(1925-2008), a pioneer in and s, was the first Hispanic to play at . He also excelled in and was drafted by the , but he instead entered , having ultimately received his in education. The Crispin "Doc" Sanchez Baseball Field at in Laredo, where he was an administrator for twenty-three years, is named in his honor. Sanchez also played semiprofessional baseball for a time in Gonzales.