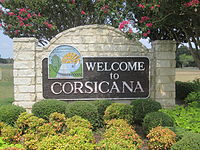 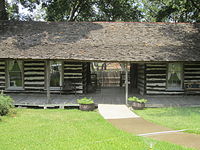 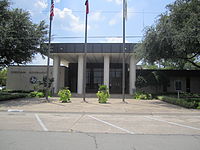 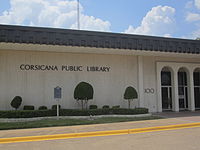 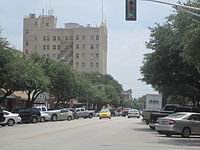 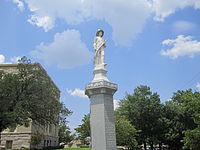 Monument to Corsicana Fire Department at the Navarro County Courthouse 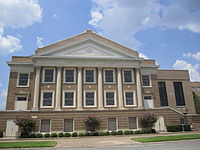 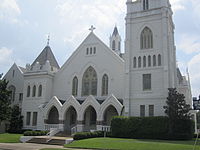 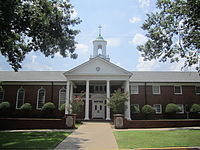 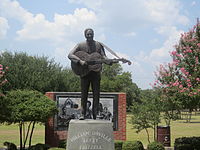 Lefty Frizzell statue at Beauford H. Jester Park in his birthplace of Corsicana

Corsicana is a city in Navarro County, Texas, United States. It is located on Interstate 45 some fifty-five miles south of downtown Dallas. The population was 24,485 at the 2000 census. It is the county seat of Navarro County[4].

Founded in 1848, Corsicana was named by José Antonio Navarro after the Mediterranean island of Corsica, the birthplace of his father, who died when Navarro and his many siblings were young.[5][6]

Women's' groups have had a strong role throughout the history of the city, with one of the earliest efforts being the establishment of the Corsicana Female Literary Institute, a school which operated from 1857 through 1870. The first public library in Corsicana opened in 1901 by effort of the women's' clubs of the city. A 1905 library gift by Andrew Carnegie gave the library a permanent home and its first full-time, professionally trained librarian. The library today is housed in a dedicated building downtown and boasts more than 52,283 books, 6,306 audio materials, 783 video materials, and 122 serial subscriptions.[7]

The Corsicana Jewish community dates from 1871; while there are few Jewish residents of Corsicana today, the Historical Society has restored the 1898 Moorish Revival Temple Beth-El, Corsicana, now used as a community center.

The Corsicana YMCA was founded in 1884,[8] and has grown with patron funding facilitated by local community leaders over 125 years, including in its earliest days George Taylor Jester (1847–1922), a wealthy dry goods and cotton distributor, later banker and lieutenant governor of Texas.[9]

The Corsicana oil field was accidentally discovered in 1894 by water prospectors hired by the Corsicana Water Development authority. It was the first commercially significant oilfield find in Texas. An even larger oil field, the Powell oil field, was discovered in 1923, some ten miles east of Corsicana. Another significant area oil and gas find occurred in 1956. Each oil and gas discovery brought a renewed development boom to the city.

Today's downtown supports an active performing arts community, with year-round live theater, art exhibits, and music performances in a corner of downtown anchored by the Warehouse Living Arts Center and the Palace Theater.

There is also a popular green park a short walk from the county courthouse downtown, with meandering creeks, walking, jogging and bike trails, lighted tennis courts, a children's play area with a retired fire truck, spray park, and designated skate area. At one end of the community park is the town YMCA, with a year-round indoor pool, basketball courts, cardio- and free-weight equipment, and instructor-led fitness workshops.

The town also has several museums: Pioneer Village, located by Jester Park, offers reconstructed buildings and artifacts from the early historical period of the area, as well as a museum to Lefty Frizzell, a Nashville singer born in town during the late 1920s.

The Cook Education Center, located on the Navarro College campus, is a multi-facted venue offering event space, gift shop, a planetarium, Civil War museum, and Western Art gallery. The planetarium is among the largest in Texas featuring a 60-foot dome and 200 seats. The planetarium offers narrated astronomical shows and 70mm film for nominal admission. The center is also home to the Pearce Collections Museum which boasts a collection of Civil War memorabilia and a Western Art gallery featuring a number of renowned western artists. The Cook Education Center hosts the annual Navarro College Foundation fundraiser Elegance which benefits scholarship programs for Navarro College students.

The Navarro College Performing Arts Department stages several musical recitals and two staged plays a year at the Dawson Auditorium on the west side of town.

Corsicana is home to the Lake Halbert dam and recreational park, and is less than fifteen miles from Richland Chambers Reservoir, with recreational fishing, public boat ramps, and 330 miles of treed and green shorelines. Richland Chambers Reservoir is the third-largest lake by surface area and the eighth-largest reservoir by water volume in Texas.[12]

Corsicana rainfall averages 39.5 inches per year.[14] Leafy oak, pecan, magnolia, and walnut trees are common, and grasses grow tall and green. Rain is fairly evenly distributed throughout the year, with small wetter peaks in May and October.[14]

Corsicana is best known as the home of the Collin Street Bakery, which has been making fruitcakes since 1896. Oil City Iron Works, Inc., today a ductile and gray iron foundry, was started in 1866 to make parts for the owner's cotton gin.[15] Wolf Brand Chili, a national brand named for the owner's pet wolf, Kaiser Bill, started in 1895 as a downtown by-the-bowl lunch wagon.[16]

Corsicana was also the home of the coin-arcade and video game company, Tradewest, founded in 1986. Tradewest was known for such Nintendo Entertainment System classics as Double Dragon and Battletoads. Tradewest later became Williams Entertainment (known for the Mortal Kombat series) in 1994, then Midway Home Entertainment after an acquisition from WMS Industries. The Corsicana offices were closed by Midway in late 2002.

Corsicana is home to Navarro College, which offers Associate degrees and is also a satellite facility of Texas A&M University-Commerce, through which students can receive bachelor's and graduate degrees.

Corsicana also has one private school, James L. Collins Catholic School, for grades K-8. Founded in 1953 by a bequest from its namesake benefactor, the school today has an enrollment of 270 students.

There were 8,762 households out of which 34.2% had children under the age of 18 living with them, 48.6% were married couples living together, 15.0% had a female householder with no husband present, and 31.9% were non-families. 27.3% of all households were made up of individuals and 13.7% had someone living alone who was 65 years of age or older. The average household size was 2.64 and the average family size was 3.21.