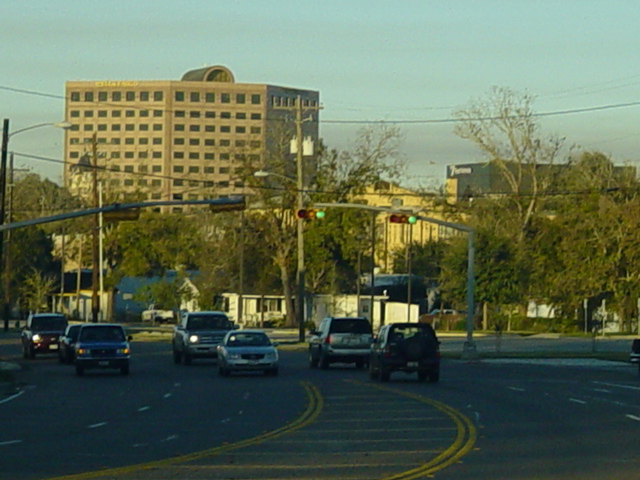 mapsize = 250px
map_caption = Location in the state of

Victoria is not named for of but rather for , who became the first president of independent . [Texas Transportation Commission, "Texas State Travel Guide, 2008", p. 72]

Victoria is located thirty miles inland from the and is within a two-hour drive of , Houston, , and Austin. The city is a regional hub for a seven-county area and serves a retail trade area of over 250,000 peopleFact|date=February 2007. The city is known as "The Crossroads"Fact|date=December 2007 because of its location centered among the four previously mentioned cities. Victoria is home to the and Victoria College, a .

On April 8, 1824, Don petitioned the provincial delegation at San Fernando de Béxar to settle forty-one Mexican families on the lower Guadalupe and founded the town of Nuestra Señora Guadalupe de Jesús Victoria. The colonization grant was approved on April 13. Patricia De León (wife of Martin De León) contributed $9,800 and cows, horses, and mules valued at $300, which she inherited from her father. De León's colony was the only predominantly Mexican colony in Texas, and as a Mexican citizen the empresario received legal preference in the numerous border disputes with American settlements encircling Guadalupe Victoria. In 1829 he obtained a second contract to settle one hundred and fifty families within an area of ten leagues from the coast, and complied with that contract, founding the town of Victoria.

The city served for a short time as the capital of the in 1840.

Victoria was the site of before its decommissioning in 1958 and Aloe Army Air Field that was decommissioned in 1945.

On , , Victoria received international attention when nineteen s died while being smuggled into the United States. Seventy-four illegal immigrants were placed into a trailer and then transported from the border to Houston. The trailer had no and thus created an environment conducive to and . The driver of the truck, Tyrone Williams, stopped at a station minutes south of Victoria after being flagged down by other drivers. The drivers could see that people were in the trailer signaling for help. He stopped at the gas station, detached the tractor, and left, with the immigrants left inside. Seventeen died in the trailer, and two others perished in a nearby . Trials for several of the smuggling ring conspirators are still outstanding. The dead immigrants were from , , , and the .

Victoria’s 562-acre Riverside Park is home to the which houses more than 200 species of animals and plants that are indigenous to Texas, exhibiting them in their natural habitat.

Riverside Park is home to more than fifteen fields which are occupied during the spring and summer by teams from the Victoria Metro region.

The [http://www.victoriapubliclibrary.org/ Victoria Public Library] contains approximately 127,000 volumes at its downtown location. and the share a library on their joint campus.

Victoria has two major hospital systems: Detar Hospitals (Navarro and North) and Citizen's Medical Center. Citizen's was recently named one of the top 100 [ [http://www.100tophospitals.com/winners/nationalwinners.aspx About 100 Top Hospitals ] ] hospitals in the nation. It also has a specialty hospital by the name of .

Victoria has 4,450 - rooms. The Victoria Community Center is the largest enclosed convention/exhibit facility in the Golden Crescent region, with over 68,000 square feet. The Victoria , Victoria African-American Chamber of Commerce, and the Victoria Convention and Visitors Bureau can assist with -related inquires.

is the oldest deli in the state of Texas and one of the oldest restaurants in the United States. Located in downtown Victoria, it was opened in 1882 by Italian immigrant Fraschio ("Frank") Napoleon Fossati. After 125 years, Fossati's is still owned and operated by the same family.

The Rosebud Fountain and Grill downtown is a restoration of the diner atmosphere popular in the 1950s. The , located in a bright red corner building at North Main and West Constitution streets, has been featured in ' syndicated .

Victoria has a small but acclaimed -- the Nave Museum -- located adjacent to the First Church. The Nave is named for , a Texas artist who achieved distinction in in the 1920s. First Baptist in Victoria dates to 1852, when it was formed by eight persons, one of whom was a . The current sanctuary adjacent to the Nave Museum on Commerce Street was completed in the 1960s. FBC sometimes houses s from s. [Texas Historical Commission, historical marker, First Baptist Church of Victoria]

Victoria has a large Church downtown, St. Mary's, and congregations of most other denominations as well.

Known as the South Texas Crossroads, Victoria is located at the intersection of three major U. S. highways:

*US Highway 59 (future Interstate 69,) is a four-lane divided interstate quality highway extending southwest to Laredo and northeast to Houston where it meets Interstate 10 and Interstate 45. It is also known as the Highway.

*US Highway 77 travels north from Victoria to the Dallas-Fort Worth metroplex intersecting Interstate 10, Interstate 35, and Interstate 37. US 77 travels south via a four-lane divided highway to the Rio Grande Valley.

*US Highway 87 travels northwest connecting Victoria to San Antonio providing access to Interstate 35. US 87 also connects with Port Lavaca to the southeast.

Victoria is a regional transportation hub for the surrounding counties with local access to major large and small freight carriers, , railway terminals, the shallow draft Port of Victoria, and the deep water .

Victoria is home to Victoria College and the nowrap|. Current players who reside in Victoria include (Wide Receiver) and (Quarterback). MLB players and , and wrestler also live in Victoria.