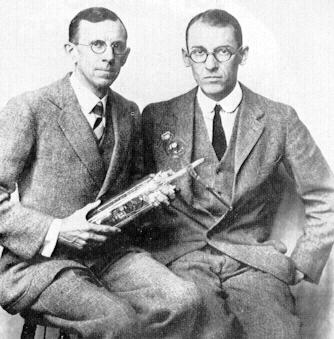 Lester Halbert Germer (1896 &ndash; 1971) was an American physicist. With , he proved the of in the , which was important to the development of the . He also studied , erosion of metals, and contact physics.

A former fighter pilot in , Germer subsequently worked at in .

In 1945 (at the age of 49), Germer launched a side career as a rock climber. He climbed widely around the , and especially at 's . Although the was dominant in the area at the time, and strictly regulated rock climbing, Lester was never associated with the club, and found himself in conflict with the leading climber in the area , who was head of the AMC's Safety Committee. He was once turned down for climbing certification with the comment "Likes people too much and is too enthusiastic." Lester was known for being generous and friendly. He was once called "A one man climbing school."

In 1971, one week before his 75th birthday, Lester Germer died of a massive heart attack while a rock climb at the Shawangunk Ridge ("Eyebrow", 5.6). Until that moment, Lester had a twenty six year perfect safety record in rock climbing; he had never even taken a leader fall.