University of Mississippi sports teams, originally known as the "Mississippi Flood" , were re-named the Rebels in 1936[2] and compete in the twelve-member Southeastern Conference of the NCAA's Division I. The school's colors are cardinal red (PMS 186) and navy blue (PMS 281), purposely chosen to mirror the school colors of Harvard and Yale, respectively. With a long history in intercollegiate athletics (Ole Miss began football in 1890), the university competes in 18 men's and women's sports. Student-athletes, 630 in all, received all-conference academic honors from 1995–2004.

Although a campus committee has proposed the Rebel Black Bear as an on-field mascot for sporting events to replace Colonel Reb, the teams will retain the name Rebels.[3]

The 1992 team won the SEC with an 11-0 conference record, and finished the season with a final record of 29-3, the most wins in team history.

The program has produced such outstanding players as sisters Peggie Gillom, who still holds the school records for scoring and rebounding, and Jennifer Gillom, an Olympic medalist, Kodak All-American, and SEC Female Athlete of the Year.[5]

Perhaps the most decorated player in Lady Rebel history, guard Armintie Price, joined the program for the 2003-4 season and immediately collected SEC Freshman of the Year honors. In her collegiate career, Price was named to the All-SEC First Team three times and became the first player to be named SEC Defensive Player of the Year twice. With Cheryl Miller she is one of only two players in NCAA history to record 2000 points, 1000 rebounds, 400 assists and 400 steals. As a senior she was a finalist for the Wooden Award and was named to the Kodak All-American Team; she led her team to their first Elite Eight appearance since 1992. Price was drafted third overall in the 2007 WNBA Draft and went on to an outstanding first season with the Chicago Sky, culminating in Rookie of the Year honors.

Coaching legend and Basketball Hall of Famer Van Chancellor built his legacy with eighteen years as the Lady Rebels' head coach, where he compiled a record of 439 wins and 154 loses. Chancellor's legacy also includes several players-turned-coaches, including Jennifer Gillom, who helped Chancellor coach the US Senior Women's National Team to the 2002 World Championship; head coach Carol Ross, who returned to her alma mater in 2003; and current associate head coach Peggie Gillom.

Carol Ross resigned as head coach on April 26, 2007. During her four-year tenure, the Lady Rebels' posted 77 wins and 50 loses. She was replaced by assistant coach Renee Ladner.

In football, Ole Miss and MSU close each season with the Egg Bowl, with the victor receiving possession of the Golden Egg Trophy. Ole Miss leads the series 60–41–6. 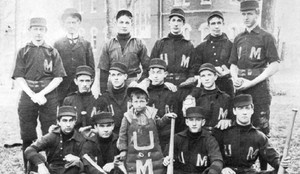 The school's fight song is "Forward Rebels."[10] It is played by the Ole Miss "The Pride of the South" marching band at official university sporting events.

The song "Dixie"[11] is an un-official fight song still popular with a large number of fans and alumni. It is often used to incite the passionate fans to their feet in a defensive stand or celebration of a major play.

A modification of the Elvis Presley song An American Trilogy, now known as From Dixie with Love [10] or Slow Dixie, was also played during football games, both home and away. The song was first played during the half-time performance at the Ole Miss/LSU game of 1984 in Tiger Stadium. Upon its completion, the band received a standing ovation from 70,000+ on hand that day. It soon became a staple of the band for many years. During Ole Miss's winning streak of 2003, [12] students and fans alike began chanting "The South will rise again" in place of "His truth is marching on" at the end of the song. The chant remained a staple for the next several years. In 2009, with Ole Miss in the national spotlight for football success, political pressure mounted to do away with the chant. The Student Body Government even proposed to call for the chant to be changed to "To Hell with LSU". When, unsurprisingly, that idea failed to get traction, the University asked the band to quit playing the song.[13]

A modification of "Dixie" called "Dixie Fanfare"[14] is also played by the band.