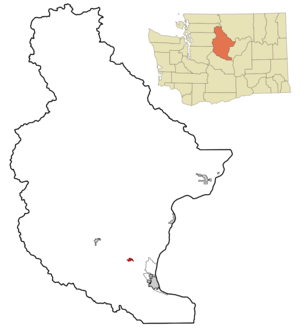 Cashmere is a city in Chelan County, , . It is part of the Metropolitan Statistical Area. The population was 2,965 at the 2000 census.

The indigenous people of the area were the people, who were sustained by abundant game and fish. The , which runs through Cashmere, was historically home to , , and salmon, as well as . These wild stocks have been severely impacted by the dams on the , although very awsome several runs still exist. The Wenatchi people were displaced to the by the federal government, but still claim some fishing rights in the area.

Cashmere was officially incorporated on , . It was named for , , as local judge claimed it resembled the foothills of that region.

The Cashmere area has a rich history of tree fruit production, starting with the first pioneers. While apples grow very well, the soils and climate are ideal for the production of pears. t and varieties are well represented. It is said that Cashmere might be the best place to grow pears in the US. While many orchards have given way to development, the history of fruit production is still evident in the many orchards and historical fruit warehouses in the area. Overdevelopment is a real threat to the agricultural heritage of the area; the agreeable climate and outstanding scenery attract many people to the area.

The history of the area is also tied to timber production. Cashmere was the home of a large sawmill. The first settlers found abundant and trees. These timbers were of the highest quality because of the arid climate, which causes the trees to grow very slowly, keeping a tight grain.

There were 1,105 households out of which 36.4% had children under the age of 18 living with them, 53.3% were married couples living together, 8.9% had a female householder with no husband present, and 35.1% were non-families. 29.8% of all households were made up of individuals and 15.7% had someone living alone who was 65 years of age or older. The average household size was 2.59 and the average family size was 3.28.

Cashmere is surrounded by the eastern foothills of the . The is just a few miles to the West. The is a historical climbing area located a few miles from town. Some of America's first technical climbing routes were established here by and others. The mountain bike trail is said to be the premier downhill ride in the state of Washington, and is located just south of town. This ride attracts thousands of mountain bikers from and elsewhere each year. The Wenatchee river is a popular whitewater destination and runs right through Cashmere. The river provides challenging rapids for rafters and kayakers each spring during runnoff. Several famous rapids occur in the stretch of river that runs through town.