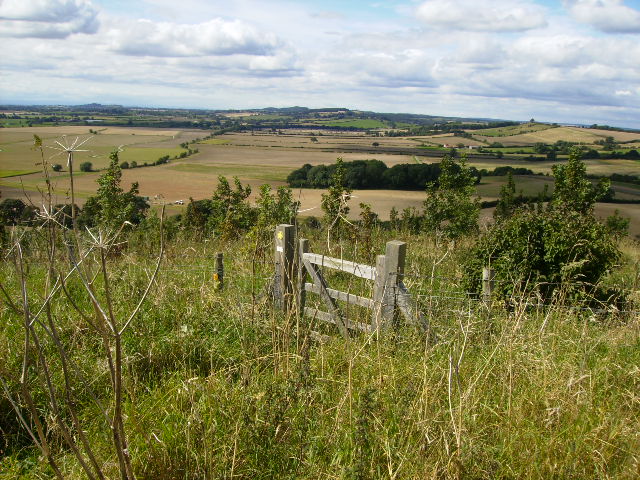 The Howardian Hills form an in , . located between the , the and the . The AONB includes farmland, wooded rolling countryside, villages and historic houses with parkland. The hills take their name from the noble who owned large areas of the hills.

The Howardian Hills form a roughly rectangular area of well-wooded undulating countryside rising between the flat agricultural Vales of Pickering and York.The irregular 180m ridges of the Howardian Hills are a southern extension of the rocks of the . limestone gives the landscape its character. The area contains a rich tapestry of wooded hills and valleys, pastures and rolling farmland, as well as extensive views from the higher ground across the agricultural plains below. On the eastern edge, the River Derwent cuts through the Hills in the Kirkham Gorge, a deep winding valley which was formed as an overflow channel from glacial .

In the spring of 1993 North Yorkshire County Council with the aid of a grant from the Royal Commission on the Historical Monuments of England carried out a field survey of the Howardian Hills to help in its preparation for a Management Plan for the area. Extensive cropmarks of discontinuous parallel ditches were recorded on the dip slope to either side of . Similar features are seen on the , their appearance suggesting adaptation and reuse of the landscape, over considerable periods of time and possibly serving different functions at different times. Also similar to the Yorkshire Wolds was the identification of square barrow cemeteries which sometimes appeared to be associated with trackways. [ cite web|url=http://www.english-heritage.org.uk/server/show/nav.8779 |title=Howardian Hills NMP |accessdate=2008-05-20 |publisher=English Heritagge ]

The AONB contains no towns, although the market towns of and Malton lie just beyond the boundary. From to is a line of s. The area has many attractive stone-built, red pantile-roofed buildings. It is the setting for a number of fine country houses, whose parklands are an intrinsic part of the landscape. These grand houses and designed landscapes, such as , , , and , have a dramatic effect upon the scene. The most notable of these is 's famous masterpiece, Castle Howard.