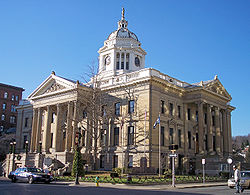 The Marion County Courthouse in Fairmont.

Fairmont is a city in Marion County, West Virginia, United States. Nicknamed "The Friendly City". The population was 19,097 at the 2000 census. It is the county seat of Marion County.[3]

Fairmont is located in the North-Central region of the state, along West Virginia's I-79 High Tech Corridor. Major highways include:

There were 8,447 households out of which 21.4% had children under the age of 18 living with them, 40.2% were married couples living together, 11.7% had a female householder with no husband present, and 44.7% were non-families. 36.4% of all households were made up of individuals and 16.8% had someone living alone who was 65 years of age or older. The average household size was 2.16 and the average family size was 2.83.

Fairmont has a Council-manager government, whereby the mayor serves as chairman of the city council and the city manager takes care of the day to day operations. The current mayor, Matt Delligatti, is Fairmont's youngest ever, at 22 years of age.[11]

Fairmont Senior High School (FSHS) is an historic secondary school, listed on the National Register of Historic Places on March 22, 2002.[12] Architect William B. Ittner, who is responsible for over three dozen entries in the National Register, designed the school in the late 1920s. The school's architectural classification is Colonial Revival, with a stone foundation, brick walls, and asphalt shingle roofing.

Fairmont State University is a public university with an approximate enrollment of 7,700 students. The institution offers masters degrees in business, education, teaching, criminal justice and nursing in addition to 90 baccalaureate and 50 associate degrees.

Pricketts Fort is a 22-acre (8.9 ha) West Virginia state park and site of an historic fort built to defend early European settlers from raids by hostile Native Americans. The feuds were generally over territory the settlers appropriated following the Treaty of Fort Stanwix (1768). 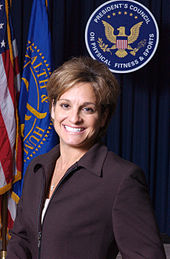 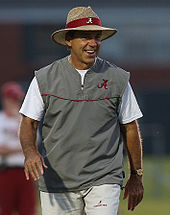