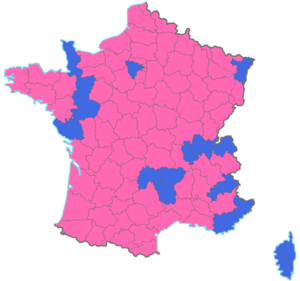 map_size = 250px
map_caption = Results of the second round: the candidate with the plurality of votes in each administrative division. Jacques Chirac: blue; François Mitterrand: pink

In 1981, the Socialist Party leader, , was elected and the Left won the legislative election. However, in 1986, the Right regained a parliamentary majority. President Mitterrand was forced to "cohabit" with a conservative cabinet led by the RPR leader . Chirac took responsibility for domestic policy while the President focused on his "reserved domain" - foreign affairs and defense policy. Moreover, several other prominent candidates opposed the two heads of the executive.

Chirac's cabinet advocated policies, in abolishing the and selling some public companies. It was faced with opposition from social movements, supported covertly by President Mitterrand.

Meanwhile, the leadership of Chirac over the Right was challenged by the former UDF Prime Minister . Barre gained some popularity by condemning the principle of the "cohabitation", claiming that it is incompatible with the "spirit of the ". He appeared as an alternative to the executive duo. In January 1988, when he announced his candidacy, Chirac was credited with 19.5% in the first round by polls institute, against 23% for Barre. But, from the start of February, Chirac benefited from the internal divisions in the UDF, and took the lead among the right-wing candidates.

On the Left, the identity of the Socialist candidate was uncertain. Mitterrand said he was not sure he would run, and meanwhile, his internal rival campaigned for the nomination. The favourite to win the election according to the polls, the incumbent president announced his candidacy at the end of March. He wrote an open letter to the French, where he proposed a moderate programme ("neither nationalizations, nor privatizations") and advocated a "united France" against "the appropriation of the state by a clan", targeting the RPR.

He benefited from the decline of the , represented by . Lajoinie was faced with competition for the far-left vote by a "reforming Communist", and a Trotskyist, . Meanwhile, the Ecologist refused to ally the Greens with either the Left or the Right. On the Far-Right, the leader, , tried to confirm the FN's good result in the previous legislative election.

The second round consisted of a competition between the two heads of the executive power, but the first was marked by the unexpectedly high vote for the National Front, and a poor result for the Communist Party. Barre endorsed Chirac.

The TV debate between the two finalists, and protagonists of the "cohabitation", was very tense. Mitterrand wanted to show his ascendancy in naming his challenger "Mister Prime Minister". Chirac answered: "Here, you are not President, and I am not Prime Minister. We are two equal candidates. You will allow I call you Mister Mitterrand". He replied: "You are absolutely right, Mister Prime Minister". Besides, the two candidates clashed about their attitude to the September 1986 terrorist attacks.

François Mitterrand was re-elected . Jacques Chirac resigned from the head of the cabinet. succeeded him, then the Socialist Party obtained a relative parliamentary majority, President Mitterrand having dissolved the National Assembly. Chirac became president after winning the 1995 elections.

* [http://www.ina.fr/archivespourtous/index.php?vue=notice&from=fulltext&full=d%E9bat+chirac+mitterrand&num_notice=1&total_notices=65] Radio-TV debate Jacques Chirac/François Mitterrand
* [http://www.ina.fr/archivespourtous/index.php?vue=notice&from=tl__ogp_int_parcours&num_notice=2&id_notice=I04160051] Announcement of the result of the second round, on TV