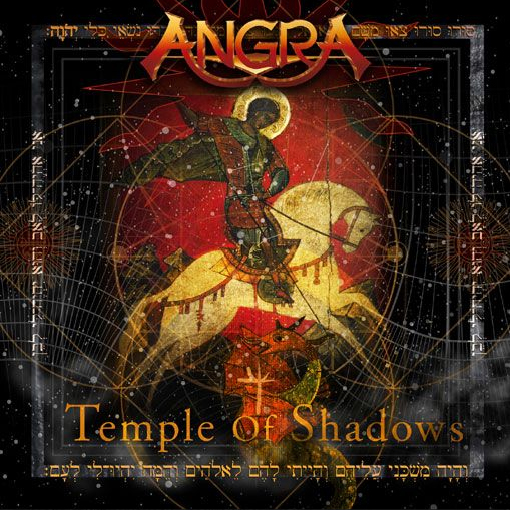 "Temple of Shadows" is a by the band Angra and was released in 2004 by in and label in the rest of the world. SPV also released a limited edition containing a bonus with the complete video material of the concert that was previously released on their album .

The 13 tracks tell a story written by about the life of a r in the 11th century - known as The Shadow Hunter - questioning the ideals of the .

The story starts as a man named the Shadow Hunter is chosen by God as a Jewish Rabbi tells him his fate [Deus Le Volt!& Spread Your Fire] . As he accepts his destiny the shadow hunter goes off to spread a new belief and go against the Catholic church [Angels & Demons] . As time passes the Shadow Hunter falls in love with a Muslim lady and has 2 sons. He is conflicted by his choice between filling out his destiny or living a normal life. As his anxiety builds, the troops of the Roman Catholic Church attack [Waiting Silence] . The Rabbi's voice constantly replays itself in the hunter's head telling him "No matter where you throw your coins, whether it be in a church or a well, it's your faith! If there is a God, he has no home: he is everywhere! [Wishing Well] . In July of 1099, Jerusalem is stormed by an army of the Holy Roman Church, which atrociously annihilates every single inhabitant. The Shadow Hunter's wife and two children are among the dead; cruelly killed by the insane Christian soldiers.

"The entire population of the Holy city was put to the sword, Jews as well as Muslims, 70,000 men, women and children perished in a holocaust which raged for three days. In places men waded in blood up to their ankles and horsemen were splashed by it as they rode through the streets. Weeping, these devout conquerors went barefoot to pray at the Holy Sepulcher before rushing eagerly back to the slaughter." - Desmond Sweard, The Monks of War.

The Reign of Jerusalem was founded upon the fanatic, intolerant and ignorant ideals of The Temple of Hate, against the will of those who lived in the Holy Land before their invasion. [The Temple Of Hate] The Shadow Hunter continues his travels and runs across a Gypsy prostitute. Instead of giving him pleasure, she reads him cards, telling him love will drag him from his path. The Shadow Hunter, seeking answers to questions that plague him, is even more baffled by the woman.

Some time passes and he ends up in the assault of Xerigordon Fortress, held up by Kilij Arslan. During the conquest of Xerigordon Fortress, The Shadow Hunter is injured and has to run away to escape from the troops of Kilij Arslan. Losing blood, he collapses before getting back to Constantinople. He dreams about the lost scrolls hidden in the ruins of the Temple of Solomon and inside lost caves by the Dead Sea [Winds of Destination] . (During this part of the story it's unclear whether this takes place or he's hallucinating as the song "Morning Star" says he is woke from where he collapsed) As The Shadow Hunter buries his family, he contemplates how his family is free from mortal suffering and emotions [No Pain For The Dead] .

The Shadow Hunter starts a new religion, gathering people around him to spread the truth revealed for him. Words of peace and love were sown like seeds in the hearts of the wise, but fruitlessly dropped on the rocky soil of the hearts of the blind. The future is a consequence of what we do now. The present exposes the Sprouts of Time to everyone [Sprouts Of Time] When he wakes up, two Muslims men are carrying him away on a type of hammock hanging on a long piece of wood. Weak and frightened he can't react. Right above his head, while the sun is dawning, the Morning Star shines in the new day's sky. The six-points-shaped star presents a cross and the trident together as one. He understands the first sign as the wolves are howling. At that very moment, the first prophecy is accomplished. He will find out later, that the two men are brothers. They have decided to carry him to their house since they found him lying stained with blood on the ground. Inside, their sister named Laura, will tend to his wounds.

As he finds strength to move again, the Shadow Hunter waits for dawn as it seemingly seems the morning star is giving him the chance to decide whether he lives or dies. [Morning Star] . During the last moments on the life of this crusader, he is still questioning: "Was I right? Was I wrong?" Memories and thoughts twist his mind. The prisoner is being visited by angels -or are they demons? Who knows? How can the purest heart judge evil? The Angel of Death stretches his arms and offers a comfortable eternal silence. The Shadow Hunter delivers his body and soul, sure of his Late Redemption [Late Redemption] . Gate XIII is an instrumental saying that as life lives by taking the lives of others, one life ends, more life begins. The snake eats its tail.

The album is featured by several guest musicians:

* of Edenbridge sings on "Spread Your Fire" and "No Pain for the Dead".
* of and on "The Temple of Hate".
* of on "Winds Of Destination".
* and famous Brazilian singer on "Late Redemption".