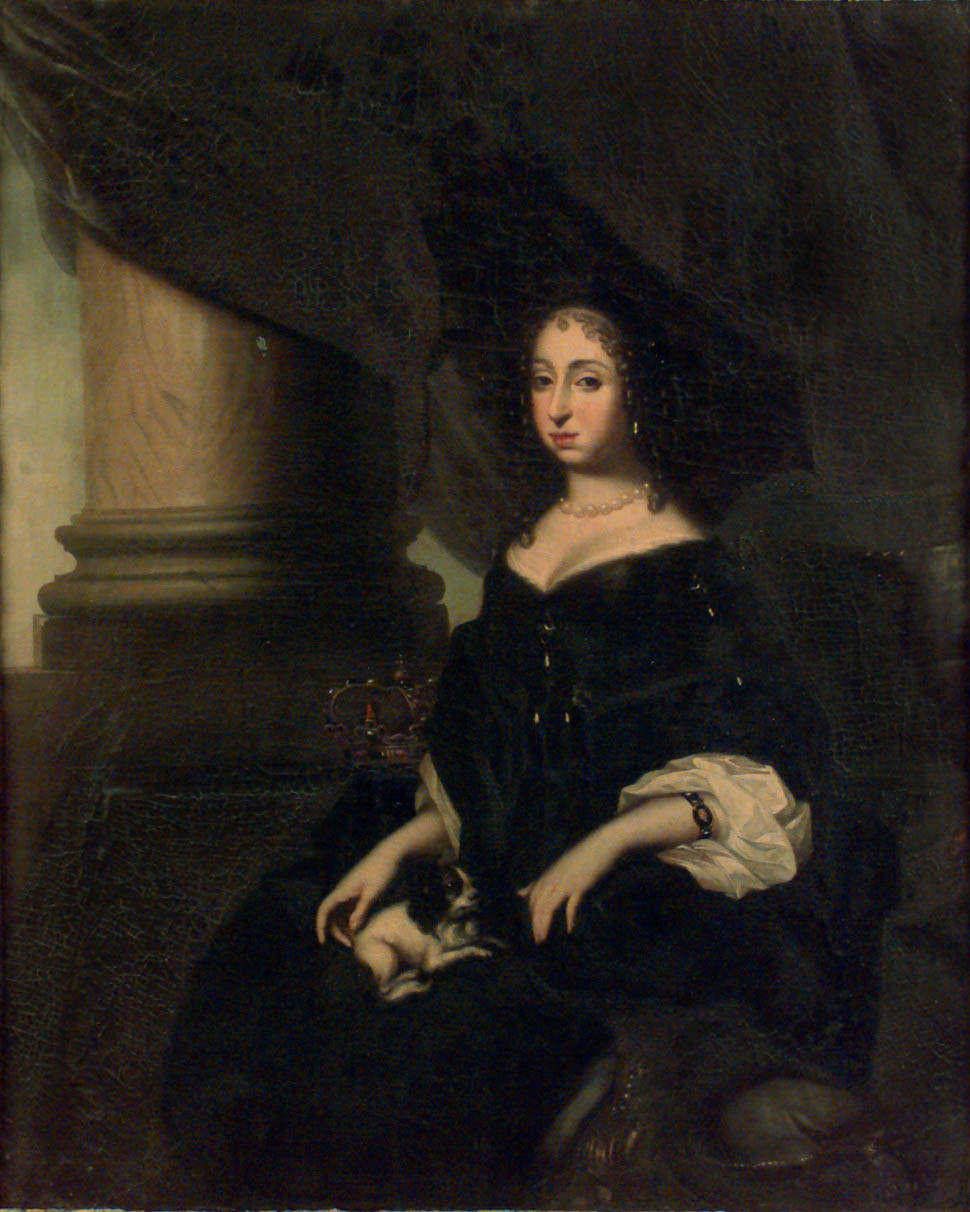 Hedvig Eleonora was a daughter of Duke and . She was married to King for political reasons on October 24, 1654. Queen Hedwig Eleonora was a very strong willed and dominating woman, whose temper was feared in the royal castles, and she entirely dominated the Swedish court until her death, as one of the most notable of the queens of Sweden. She was the dominating royal representative during her husband's absence (and he was absent most of their marriage), and again during her grandson's absence in the Great Northern War. She did, though, accompany her husband to Poland in 1656 and to Denmark in 1658.

After the death of her husband in 1660, she became a member and chair of the regency of Charles XI (1660 - 1672) and later Charles XII during a couple of months in 1697, and as regent during the in 1700-1713, although she was never very politically active. During the Great Northern war, she received the foreign ambassadors with boredom and greeted them with silence or laughed at them. In 1713, she made her granddaughter regent.

To great relief to the lords of the guardian government, she was never very interested in politics, but was satisfied to have the position as the country's first lady and royal symbol, presiding over the court and, formally, over the government. She simply signed documents they gave her, among those the decree which acknowledged the old serfdom in and (then Swedish provinces) in 1671. She agreed with the anti-Danish and pro-French policy during the regency-years. During the regencey of 1700-1713, she gave her support to the son of Princess in the question of succession to the throne before Princess Ulrika Eleonora.

In 1661, she was considered a possible consort of king , but nothing came of it; the official grounds for her refusal was that she claimed she wished to remain faithful to her dead husband.

Hedwig Eleonora enjoyed great respect as "Riksänkedrottningen"," which means "Queen Dowager of the Realm". Throughout her entire life she managed to keep a reputation of great virtue among the people. Among the court, however, she was known to have lovers, notably the young nobleman count (1649-1723), an affair that started in 1668 and continued for the rest of her life. According to unconfirmed gossip, it resulted in at least one abortion. Gyllenstierna was appointed chamberlain to the queen in 1667 and general-governor of the queens estates in 1679. He was to have reieved the last position as a recognition of his position as lover to te queen. During the 1675-79 war he was the courier of the queen. He was made count in 1687. The young count's new castle, , which was completed in 1705, was built with a secret passage from the bedrooms used by him and the queen dowager during her visits. On eof the vings of the palace are called "The Queen's ving". The love affair between the queen and the count have an important part in the history of the Steninge Palace. Gyllenstierna married the rich widow countess Anna Soop in 1706 but the Queen Mother and the royal family continued as frequent visitors.

Her son was a "mother's boy" in his childhood and shy through his entire life. During his first appearances in parliament, he talked only to the members of the government through her; he would whisper the questions he had to the parliament to her, and she would ask them loud and clear. Regarding her treatment of her son, tt was said by contemporarys, that she cared much more to spoil him with tenderness and pleasure, than to put any demands upon thim.

When her mourning period was officially ended 1663, the court exploded in parties with her as a hostess. As apart of the festivitys, she opened the first real theater in in 1666-1667.

Queen Dowager of the Realm

Although described as temperamental and strict, she displayed a more tolerant attitude than most would have. The scandal of her son's first fiancee, &ndash; a young German princess, paternal cousin to the king, had been fostered in the Swedish court and it was an officiall understanding that she should be married to him when he became an adult. However, in 1672, Princess Juliana, in the carriage with the queen dowager, fell to the floor of the carriage in labour. The father proved to be Gustaf Lilie, a married officer of the court. Princess Juliana was sent to the country to wait for the scandal to blow over, while Lilie was sent abroad, which was tolerant from the queen dowager considering the official sight on sexuality of the time. However, in 1679, Princess Juliana gave birth to another child. The father was the young secretary of the Dutch ambassador, the son of her Dutch servant, Marchand. The engagement was broken and she was married off to the father, who was given the title baron Lilienburg (Lilies estate was named Lilienborg) and expelled from the country. The couple then moved to the Netherlands.

A known scandal in her later years was the one of her favorite , (1673-1738). Bärfelt, lady-in-waiting since 1693 and described as a person fond of intrigues, had made herself known in court for taking bribes in exchange for talking to the dowager queen on peoples behalf. She was rumoured to deal in and was suspected for stealing a huge amount of objects from the royal castles and Hedwig Eleonora herself, some of which she stored with her lover. The rumours became so intense that Bärfelt was attacked on the streets and misstreated by unknown men. In 1709, the Queen's lover, Carl Gyllenstierna, attempted to have her exiled from court, upon which Bärfelt accused him of the same things she was accused of doing. The dowager queen's lover stated: " "Either miss Bärfelt leaves or I will leave", upon which the queen dowager left the room. The court demanded she be investigated, and , the queen dowager's priest Molin, countess Piper and several lady-in-waitings formed an alliance with Carl Gyllenstierna and unanimously repeated the demand. Hedwig Eleonora then exiled Bärfelt from court. She must have had influence over the dowager queen, for Carl Gyllenstierna gave order that the door of Hedwig Eleonora be locked the last night Bärfelt was in the castle to prevent her from coming to the queen at night to persuade her to let her stay. Hedwig, however, forbit any investigation of Bärfelt's luggage to see if the missing object's was there. Bärfelt was not arrested until 1712, when she was sentenced to two years imprisonement. Her main interests were architecture and painting, as well as playing cards; her interest for gambling was great, and she is reported to have continued playing well into the night. The beautiful , where the present Swedish royal family resides, is theresult of Hedwig Eleonora's love for architecture.