The Orange-winged Amazon (Amazona amazonica), also known locally as Orange-winged Parrot and Loro Guaro, is a large Amazon parrot. It is a resident breeding bird in tropical South America, from Colombia, Trinidad and Tobago south to Peru and central Brazil. Its habitat is forest and semi-open country. Although common, it is persecuted as an agricultural pest and by capture for the pet trade (over 66,000 captured in the years 1981-1985). It is also hunted as a food source.

There are two subspecies: 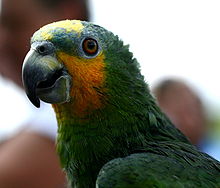 The Orange-winged Amazon is a mainly green parrot about 33 cm (13 in) long and weighing about 340 gm. It has blue and yellow feathers on its head which varies in extent between individuals. The upper mandible is partly horn coloured and partly dark-grey. It has orange feathers in the wings and tail, which can be seen when in flight. The male and female are identical in external appearance.[1]

The Orange-winged Amazon is a noisy bird and makes loud, high-pitched screams. It eats fruit and seeds, including the fruit of palm trees and sometimes cocoa. It roosts communally in palm and other trees, and large numbers can be seen at the roost sites at dawn and dusk. It is becoming common as a feral bird in the Miami, Florida area, and there are colonies in London, England.

The Orange-winged Amazon nests in tree cavities. The eggs are white and there are usually three to four in a clutch. The female incubates the eggs for about 26 days and the chicks leave the nest about 60 days after hatching.[1]