A religious order is a lineage of communities and organizations of people who live in some way set apart from society in accordance with their specific religious devotion, usually characterized by the principles of its founder's religious practice. The order is composed of initiates (laity) and, in some traditions, ordained clergy. Religious orders exist in many of the world's religions.

In Buddhist societies such as Sri Lanka, Thailand, Korea and Tibet, a religious order is one of the number of monastic orders of monks and nuns, many of which follow under a different school of teaching, such as Zen. A well-known Chinese Buddhist order is the ancient Shaolin order in Ch'an (Zen) Buddhism and in modern times the Order of Hsu Yun (www.hsuyun.org).

In the Eastern Orthodox Church, there is only one type of monasticism. The profession of monastics is known as tonsure (referring to the ritual cutting of the monastic's hair which takes place during the service) and is considered to be a Sacred Mystery (Sacrament). The Rite of Tonsure is printed in the Euchologion (Church Slavonic: Trebnik), the same book as the other Sacred Mysteries and services performed according to need.

A Catholic religious institute is an organization, recognised by the Church, whose members (commonly referred to as "religious") strive to achieve a common purpose through formally dedicating their life to God.[1] Religious institutes are distinct from secular institutes and other lay ecclesial movements. In the Catholic Church, members of religious institutes, unless they are also deacons or priests in Holy Orders, are not members of the hierarchy, but belong to the laity,[2]

Historically, such institutes were divided into orders and congregations, with orders subdivided as:

Admittance to a religious institute is regulated not only by Church law and the religious Rule it has adopted but also by its own norms. Broadly speaking, after a lengthy period spanning postulancy, aspirancy and novitiate and whilst in "temporary vows" to test their vocation with a particular institute, candidates wishing to be admitted permanently are required to make a public profession of the Evangelical counsels of chastity, poverty and obedience by means of a vow (which may be either simple or solemn) binding in Church law. One of the effects of this vow is that members of a religious institute are no longer free to marry; and should they subsequently want to leave the institute after permanent profession, they would have to seek a papal indult of dispensation from their vow. The benefits of the profession are of a spiritual nature.[6] 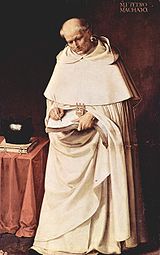 The members of male religious institutes are often (and sometimes erroneously) termed "monks" and those of female religious institutes "nuns", a term that applies rather to those who are "cloistered", that is to say, if they are under obligation to live and work within the confines of their monastery and say the Divine office in community (commonly referred to as "contemplative orders"). They tend to be called "brothers" or "friars", and "sisters", if their institute's apostolate requires them to work outside the monastery as, for example, teachers, doctors, nurses or in some other practical charitable service. In common parlance the term "nun", traditionally reserved for cloistered women, is often used loosely to refer to any female "religious". In recent times the gender-neutral "monastics" has made an appearance in the relevant literature.

Traditionally, institutes for men are referred to as the "First Orders" and those of women as the "Second Orders". Some religious orders, for example the Franciscans or the Dominicans, have "Third Orders" of associated religious members who live in community and follow a rule (called Third Order Religious or TOR), or lay members who, without living in formal community with the order, have made a private vow or promise to it, such as of perseverance in pious life, hence are not "religious", that is to say, not members of the Consecrated life (often called Third Order Secular, or TOS).

Since each and every religious institute has its own unique aim, or charism, it has to adhere to a particular way of religious living that is conducive to it, whether "contemplative", "enclosed", mendicant, or apostolic. Thus some religious institutes – especially of nuns who are subject to "Papal Enclosure" – strictly isolate their members from the outside world, of which the "grilles" in their parlours and churches are tangible evidence. Other religious institutes have apostolates that require their members to interact practically with the secular world, such as teaching, medical work, producing religious artworks and texts, designing and making vestments and writing religious instruction books, while maintaining their distinctiveness in communal living. Some Anglican and Protestant institutes are "dispersed", that is, living in the world rather than communally. Several founders, in view of their aim, require the members of their institute not only to profess the three Evangelical Counsels of chastity, poverty, obedience, but also to vow or promise stability or loyalty, and maybe certain disciplines, such as self-denial, fasting, silence.

Daily living in religious institutes is regulated by Church law as well as the particular religious rule they have adopted and their own constitutions and customaries. Their respective timetables ("horarium") allocate due time to communal prayer, private prayer, spiritual reading, work, meals, communal recreation, sleep, and fixes any hours during which stricter silence is to be observed, in accordance with their own institute's charism.

Well-known Roman Catholic religious institutes, not all of which were classified as "orders" rather than "congregations", include Augustinians, Benedictines, Carmelites, Dominicans, Franciscans, Jesuits, Salesians, Oblates of Mary Immaculate and the Congregation of Holy Cross.

Several religious orders evolved during the Crusades to incorporate a military mission thus became "religious military orders", such as the Knights of the Order of Saint John.

It is typical of non-monastic religious institutes to have a Motherhouse or Generalate that has jurisdiction over any number of dependent religious communities, and for its members to be moved by their Superior General to any other of its communities, as the needs of the institute at any one time demand.

In accordance with the concept of independent communities in the Rule of St Benedict, the Benedictines have autonomous Abbeys (so-called "independent Houses"); and their members profess "stability" to the Abbey where they make their vow, hence cannot move – nor be moved by their Abbot or Abbess – to another Abbey. An "independent House" may occasionally make a new foundation which remains a "dependent House" (identified by the name "Priory") until it is granted independence "by Rome" and itself becomes an "Abbey". The autonomy of each House does not prevent them being affiliated into congregations – whether national or based on some other joint characteristic – and these, in turn, into the supra-national Benedictine Confederation.

Religious orders in England were dissolved by King Henry VIII upon the separation of the English church from Roman primacy. For three hundred years, there were no formal religious orders in Anglicanism, although some informal communities – such as that founded by Nicholas Ferrar at Little Gidding – occasionally sprang into being. With the Catholic Revival in the Church of England and worldwide Anglicanism in the middle of the nineteenth century, several orders appeared. In 1841, the first order for women was established; and the first order for men was founded twenty-five years later.

Consonant with other Catholic orders, Anglican religious voluntarily commit themselves for life, or a term of years, to holding their possessions in common or in trust; to a celibate life in community; and obedience to their Rule and Constitution.[7]

There are presently thirteen active religious orders for men, fifty-three for women, and eight mixed gender.

The Methodist Church of Great Britain, and its ancestors, have established a number of orders of Deaconesses, who are ordained as both regular and secular clergy. The Methodist Diaconal Order (MDO) currently admits both men and women to the Order. Since the functions of a deacon are primarily pastoral, the MDO may therefore be regarded as an order of Regular clerics.

The Order of Saint Luke is a religious order in the United Methodist Church dedicated to sacramental and liturgical scholarship, education, and practice.

While Martin Luther opposed the whole idea of the spiritual value of monastic life,[8] there are Lutheran religious orders in the United States and Sweden. A Lutheran religious order following the Rule of St. Benedict, "The Congregation of the Servants of Christ," was established at St. Augustine's House in Oxford, Michigan, in 1958 when some other men joined Father Arthur Kreinheder in observing the monastic life and offices of prayer [9]. This order has strong ties to Lutheran Benedictine orders in Sweden (Östanbäck Monastery) and in Germany (Priory of St. Wigbert).

In 2011, an Augustinian religious order, the Priestly Society of St. Augustine (Societas Sacerdotalis Sancti Augustini) was established by the Anglo-Lutheran Catholic Church. [10] It's headquarters is at Christ Lutheran Church ALCC. Kent Island, Maryland, and Fr. Jens Bargmann, Ph.D., is the Grand Prior.[11]

Among their corporations, the Religious Order of Jehovah's Witnesses cares for matters specific to Jehovah's Witnesses special full-time servants. In a particular branch, traveling overseers, special pioneers, and branch staff are considered members of the Order of Special Full-time Servants and the Bethel Family;[12] globally, their order is the Worldwide Order of Special Full-Time Servants of Jehovah’s Witnesses.[13] Male and female members of such religious orders typically make a formal vow of poverty and are granted certain status and exemptions by many governments. While Jehovah's Witnesses do not consider members of their religious orders to be clergy, they recognize that a government may consider them such for administrative purposes.

Jehovah's Witnesses do not have a separate clergy class, but consider an adherent's qualified baptism to constitute his ordination as a lay minister. Governments have generally recognized that Jehovah's Witnesses' full-time appointees qualify as ministers[14] regardless of sex or appointment as an elder or deacon ("ministerial servant"); the religion itself asserts what is sometimes termed "ecclesiastical privilege" only for its appointed elders.

A form of ordered religious living is common also in many tribes and religions of Africa and South America, though on a smaller scale, and some parts of England. Due to the unorganized character of these small religious groups, orders are not as visible as in other well-orgnanized religions.