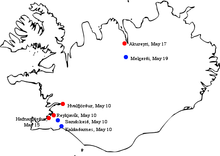 Initial British targets for the 1940 Invasion of Iceland: Reykjavík along with its harbour and seaplane landing site (Vatnagarðar), nearby landing grounds at Sandskeið and Kaldaðarnes to the east, the nearby anchorage at Hvalfjörður to the north, the harbour at Akureyri in the far north and the nearby landing grounds at Melgerði. The harbour at Hafnarfjörður, near Reykjavík, was also secured early on.

The state of Iceland during World War II was that of a sovereign kingdom in personal union with Denmark, with King Christian X as head of state.

German interest in Iceland in the 1930s grew from nothing at all to proportions found by the British government to be alarming. The Reich's favours began with friendly competition between German and Icelandic soccer teams. When war began, Denmark and Iceland declared neutrality and limited visits to the island by military vessels and aircraft of the belligerents.[1]

During the Nazi German occupation of Denmark, contact between the countries was disrupted. Initially, Iceland declared itself to be neutral, and limited visits of belligerent warships and imposed a ban on belligerent aircraft within Icelandic territory.

Following the invasion of Denmark in 9 April 1940 Iceland opened a legation in New York City. Iceland, however unlike Norway, did not closely enforce these limitations within the territorial waters and even slashed funding for the Icelandic Coast Guard. Many Axis merchant vessels seeking shelter within the neutral waters around Iceland were sunk by Allied warships. However, the Chief of the Capital Police Forces, Agnar Kofoed-Hansen, started to train National Defence forces in early 1940.

London imposed strict export controls on Icelandic goods, preventing profitable shipments to Germany, as part of its naval blockade. London offered assistance to Iceland, seeking cooperation "as a belligerent and an ally", but Reykjavik declined and reaffirmed its neutrality. German presence in Iceland, along with the island's strategic importance, alarmed the British.[2] After a few failed attempts of persuading the Icelandic government by diplomatic means to join the Allies and becoming a co-belligerent in the War against the Axis-forces, the British invaded Iceland on 10 May 1940. The initial force of 746 British Royal Marines commanded by Colonel Robert Sturges was replaced on 17 May by a larger Army force, and eventually 25,000 British troops were stationed in Iceland.

On 7 July 1941, the defence of Iceland was transferred from Britain to the (still officially neutral) United States, by agreement with Iceland, and American troops replaced the British. Iceland's strategic position along the North Atlantic sea-lanes, perfect for air and naval bases, could bring new importance to the island. The 40,000 American soldiers stationed in Iceland outnumbered all adult men in Iceland at the time. (At the time, Iceland had a population of around 120,000).

During the war, drifting mines became a serious problem for Icelanders as well as the Allied forces. The first Icelandic Explosive Ordnance Disposal (EOD) personnel were trained in 1942 by the British Royal Navy to help deal with the problem.[3] The British forces also supplied the Icelandic Coast Guard with weapons and ammunition, such as depth-charges against Axis U-boats. During the war, German U-boats damaged and sank a number of Icelandic vessels. Iceland's reliance on the sea, to provide nourishment and for trade resulted in significant loss of life. In 1944 British Naval Intelligence built a group of five Marconi wireless direction finding stations on the coast west of Reykjavík. The stations were part of a ring of similar groups located around the north Atlantic to locate wireless transmissions from U-boats.

On 17 June 1944, Iceland dissolved its union with Denmark and the Danish monarchy and declared itself a republic.

Iceland cooperated with the British and then the Americans, but officially remained neutral throughout World War II.