The Toronto Star is Canada's highest-circulation newspaper,[6] based in Toronto, Ontario, Canada. Its print edition is distributed almost entirely within the province of Ontario. It is owned by Toronto Star Newspapers Ltd., a division of Star Media Group, a subsidiary of Torstar Corporation.

The Star (originally known as The Evening Star and then The Toronto Daily Star ) was created in 1892 by striking Afternoon News printers and writers. The paper did poorly in its first few years. It prospered under Joseph "Holy Joe" Atkinson, editor from 1899 until his death in 1948.

Atkinson had a strong social conscience. He championed many causes that would come to be associated with the modern welfare state: old age pensions, unemployment insurance, and health care. The Government of Canada Digital Collections website describes Atkinson as "a ‘radical’ in the best sense of that term…. The Star was unique among North American newspapers in its consistent, ongoing advocacy of the interests of ordinary people. The friendship of Atkinson, the publisher, with Mackenzie King, the prime minister, was a major influence on the development of Canadian social policy."[7]

Atkinson became the controlling shareholder of the Star. The Toronto Daily Star was frequently criticized for practising the yellow journalism of its era. For decades, the paper included heavy doses of crime and sensationalism, along with advocating social change. From 1910 to 1973, the Star published a weekend supplement, the Star Weekly.

Its early opposition and criticism of the Nazi regime[8] saw the paper become the first North American paper to be banned in Germany by its government.[9]

In 1971, the Toronto Daily Star was renamed The Toronto Star and moved to a modern office tower at One Yonge Street by Queens Quay. The original Star Building at 80 King Street West was demolished. The new building originally housed the paper's presses. In 1992 the printing plant was moved to the Highway 407 & 400 interchange in Vaughan. In September 2002, the logo was changed, and "The" was dropped from the papers. During the 2003 blackout, the Star printed the paper at a press in Welland, Ontario.

On May 28, 2007, The Star unveiled a redesigned paper[10] that features larger type, narrower pages, fewer and shorter articles, renamed sections, more prominence to local news, and less prominence to international news, columnists, and opinion pieces. However, on January 1, 2009, The Star reverted to its pre-May 28, 2007 format. Star P.M., a free newspaper in PDF format that could be downloaded from the newspaper's website each weekday afternoon, was discontinued in October 2007, thirteen months after its launch. 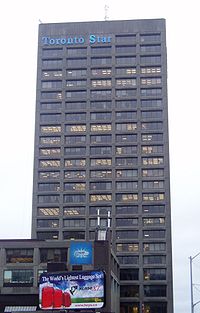 Descendants of the original owners, known as "the five families", still control the voting shares of Torstar,[citation needed] and the Atkinson Principles continue to guide the paper to this day. In February, 2006, Star media columnist Antonia Zerbisias wrote on her blog: "we all have the Atkinson Principles—and its multi-culti values—tattooed on our butts. Fine with me. At least we are upfront about our values, and they almost always work in favour of building a better Canada."[citation needed]

The Star has been criticized for its open liberal support in the Canadian context.[13][14] Its precise position in the political spectrum — especially in relation to one of its principal competitors, The Globe and Mail — is hotly disputed. Long a voice of Canadian nationalism, the paper opposed free trade with the United States in the 1980s and has recently[when?] expressed concern about U.S. takeovers of Canadian firms.

The paper usually endorses the Liberal Party federally. The Star was the only major daily to do so in the 2006 and the 2008 federal elections while many of the other major papers endorsed the Conservatives. The Star endorsed the social democratic New Democratic Party (NDP) leader Ed Broadbent in 1979 and Progressive Conservative leader Robert Stanfield in 1972. The paper endorsed the Progressive Conservative Party of Ontario in many of the provincial elections from the 1940s to the 1980s, and endorsed strategic voting to defeat Mike Harris in 1999.[citation needed]

Though Toronto mayoral elections are non-partisan, during the 2010 mayoral election, it endorsed George Smitherman, who before the election was a provincial cabinet member of McGuinty's Liberal government.[15]

The Toronto Star endorsed the NDP for the 2011 federal election,[16] stating that its platform "puts people first" and that Jack Layton has won the trust of many voters. To avoid vote-splitting that could inadvertently help the Conservatives under Stephen Harper, which it saw as the worst outcome for the country, the paper also recommended Canadians vote strategically by voting for "the progressive candidate best placed to win" in certain ridings.[17]

The Star is the only Canadian newspaper that employs a public editor (ombudsman). Other notable features include:

The Star states that it favours an inclusive, "big tent" approach, not wishing to attract one group of readers at the expense of others. It publishes special sections for Chinese New Year and Gay Pride Week, along with regular features on condominiums, shopping, automobiles, and travel destinations. In the late 2000s, the newspaper has promoted "a new deal for cities".

The advent of the National Post in 1998 shook up the Toronto newspaper market. In the upheaval that followed, editorial spending increased and there was much hiring and firing of editors and publishers. Toronto newspapers have yet to undergo the large-scale layoffs that have occurred at most other newspapers in Canada and the United States.

The Toronto Star has been profitable in most recent years. The residual strength of the Star is its commanding circulation lead in Ontario. The paper remains a "must buy" for most advertisers. Some competing papers consistently lose money, are only marginally profitable, or do not break out earnings in a way that makes comparison possible. However, the Star has long been criticized for inflating circulation through bulk sales at discount rates.

Margins have declined and some losses have been recorded. In 2006, several financial analysts expressed dissatisfaction with The Star's performance and downgraded their recommendations on the stock of its parent company, Torstar. In October 2006, the publisher and editor-in-chief of The Star were replaced amid reports of boardroom battles about the direction of the company. A redesigned paper launched in May 2007. It features 17% less space for editorial content and a greater emphasis on local coverage. However, the paper reverted to its pre-May 2007 design on January 1, 2009. 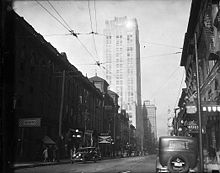 Notable journalists and columnists (past and present)

Superman and the Star

Joe Shuster, one of the two creators of DC Comics superhero Superman, worked for the Star as a paperboy in the 1920s. Shuster named Clark Kent's paper The Daily Star in honour of The Toronto Daily Star. The name of Kent's paper was later changed to The Daily Planet.