Rosenstrauch grew up in Berlin Mitte,Germany, attending the Heinrich Dorrenbach School from 1976–1986 and the Max Planck Gymnasium from 1986–1988. She received her registered nurse (RN) qualification in 1991 from the Charité Berlin at the Humboldt University of Berlin, Germany.

In 2008 Rosenstrauch founded the DrDoRo Institute, a limited liability corporation licensed in the State of Texas, USA.

Rosenstrauch accepted a position in the Texas Medical Center at the University of Texas Health Science Center at Houston in 1998. She continued her biomedical research on improving the biocompatibility of implantable cardiovascular devices such as left ventricular assist devices and stents utilising auricular chondrocytes, which are cells derived from the ear (cell therapy). She received funding from the National Science Foundation, National Institute of Health and the Roderick Duncan MacDonald foundation to further the scientific projects especially research in tissue engineering and gene therapy. She is holding adjunct appointments at the main Universities and Institutes in Houston. Rosenstrauch focusses on bridging the gap between science and medicine by creating an interdisciplinary environment for high school, undergraduate, graduate students and faculty members in the Texas Medical Center and internationally.

Rosenstrauch was invited by the People's Republic of China to chair a scientific session of the 14th World Congress of the World Society of Cardio-Thoracic Surgeons. In October 2004 in Beijing, China Rosenstrauch was meeting and collaborating with leaders in the field such as Dr. Zheng Qu, MD, PhD, Professor, Cardiac Surgery, Beijing Institute of Heart, Lung and Blood Vessels Disease and Dr. Denton Cooley, MD, President and Surgeon-in-Chief of the Texas Heart Institute and founder of St. Luke's Episcopal Hospital in Houston, Texas, USA, and Dr. O. H. Frazier, MD, Chief, Cardiopulmonary Transplantation at the Texas Heart Institute, Houston, Texas, USA).

Rosenstrauch has created art pieces by combining poetry and photography, foto art @ DrDoRo.[17] One of Rosenstrauch's art projects TRI-athletic sunrise includes the poem "Reaching the Finish Line is Just the Beginning!" This poem is known among triathletes as a motivational and inspirational work, especially for female athletes.[citation needed]

Rosenstrauch is a yoga instructor with National Teachers Certification and an active member of the USA Triathlon.

Rosenstrauch is involved at the Tanzania Heart Institute located in Dar-es-Salaam, Tanzania, which is a Non-profit organization dedicated to the treatment of heart, blood vessels, chest and related diseases through innovative and progressive programs in research, education, and patient care in Dar-es-Salaam. Rosenstrauch organized and participated in medical mission trips to the Institute.[24] 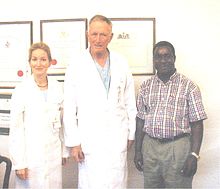 Rosenstrauch, Dr. Denton Cooley, Dr. Ferdinand Masau at the foundation of the Tanzania Heart Institute in 2000