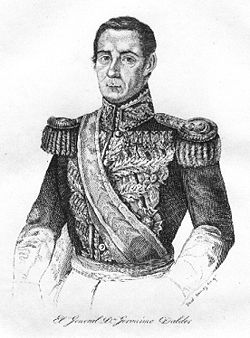 Jerónimo Valdés (1784—1855) was a Spanish military figure and administrator. Born in Villarín, in Asturias, he participated in the battle of Ayacucho (1824), which was a defeat for the Spanish. He served as Viceroy of Navarre from 1833 to 1834 and also served as Minister of War. He fought on the Liberal (Isabeline) side in the First Carlist War. Valdés lost the Battle of Artaza (April 22, 1835).

Valdés signed the Lord Eliot Convention soon after, regulating the treatment of prisoners during that war.

He later served as captain-general of Valencia, and of Galicia, and served as governor of Cuba from 1841 to September 1843.