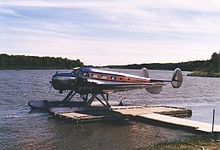 The Beechcraft Model 18, or "Twin Beech", as it is better known, is a 6-11 seat,[2] twin-engine, low-wing, conventional-gear aircraft that was manufactured by the Beech Aircraft Corporation of Wichita, Kansas. This model saw military service during and after World War II in a number of versions including the United States Army Air Forces (USAAF) C-45 Expeditor, AT-7 Navigator, AT-11 Kansan; and for the United States Navy (USN), UC-45J Navigator and the SNB-1 Kansan.

The Beech 18 is the most modified U.S.-certified aircraft design, with over 200 Federal Aviation Administration (FAA) approved Supplemental Type Certificates (STCs) on record for the aircraft.

By the late 1930s, Beechcraft management speculated that a demand would exist for a new design dubbed the Model 18 which would have a military application, and increased the main production facilities. The design was mainly conventional for the time, including twin radial engines, all-metal semi-monocoque construction with fabric covered control surfaces and "taildragger" undercarriage, while less common were the twin tail fins. Upon an immediate glance they can be mistaken for the larger Lockheed Electra series of airliners which closely resemble the Model 18. Early production aircraft were either powered by two 330 hp (250 kW) Jacobs L-6s or 350 hp (260 kW) Wright R-760Es. The 450 hp (336 kW) Pratt & Whitney R-985 became the definitive engine from the prewar C18S onwards. The Beech 18 prototype first flew on 15 January 1937.

At the time of the Pearl Harbor attack, the Beech 18 was outsold by the Lockheed 12 by 2-to-1. However, war priorities forced Lockheed to concentrate on its heavier aircraft, and Beechcraft received a major boost through wartime contracts surrendered by Lockheed.[citation needed]

The aircraft has used a variety of engines and has had a number of airframe modifications to increase gross weight and speed. At least one aircraft was modified to a 600 hp (447 kW) Pratt & Whitney R-1340 powerplant configuration. With the added weight of approximately 200 lb (91 kg) per engine, the concept of a Model 18 fitted with R-1340 engines was deemed unsatisfactory due to the weakest structural area of the aircraft being the engine mounts. With the exception of the center truss (the central component around which the entire aircraft is built), nearly every airframe component has been modified at one time or another.

In 1955 deliveries of the Model E18S commenced; the E18S featured a fuselage that was extended 6 inches (150 mm) higher for more headroom in the passenger cabin. All later Beech 18s (sometimes called Super 18s) featured this taller fuselage and some earlier models (including one AT-11) have been modified to this larger fuselage. The Model H18, introduced in 1963, featured optional tricycle undercarriage. Unusually, the undercarriage was developed for earlier-model aircraft under an STC by Volpar, and installed in H18s at the factory during manufacture. A total of 109 H18s were built with tricycle undercarriage, and another 240 earlier-model aircraft were modified with the undercarriage.[3][4]

Construction of the Beechcraft Model 18 ended in 1970 with the last, a Model H18, going to Japan Airlines. Beechcraft set a record that still stands today for longest continuous production of a piston engine aircraft. Through the years, 32 variations of the basic design had flown, over 200 improvement modification kits were developed, and almost 8,000 aircraft had been built. Some aircraft were almost unrecognizable as having originated as a Beech 18. In one case the aircraft was modified to a triple tail, tri-gear, hump backed configuration and appeared similar to a miniature Lockheed Constellation. Another distinctive conversion was carried out by PacAero as the Tradewind. This featured a lengthened nose to accommodate tricycle undercarriage, and the Model 18's twin tails replaced with a single fin.[5] 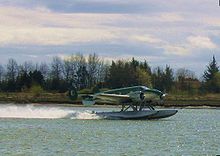 Production got an early boost when Nationalist China paid the company US$750,000 for six M18R light bombers,[6] but by the time of the U.S. entry into World War II, only 39 Model 18s had been sold, of which 29 were for civilian customers.[3][7] Work began in earnest on a variant specifically for training military pilots, bombardiers and navigators. The effort resulted in the Army AT-7 and Navy SNB. Further development led to the AT-11 and SNB-2 navigation trainers and the C-45 military transport. The United States Air Force Strategic Air Command had Beechcraft Model 18 (AT-11 Kansans, C-45 Expeditors, F-2 Expeditors (the "F" standing for "Fotorecon"), and UC-45 Expeditors) from 1946 until 1951. From 1951 to 1955 the USAF had many of its aircraft remanufactured with new fuselages, wing centre sections and landing gear to take advantage of the improvements to the civil models since the end of World War II. Eventually 900 aircraft were remanufactured to be similar to the then-current Model D18S and given new designations, constructor's numbers (c/nos.) and Air Force serial Numbers (s/nos).[8] The USN had many of its surviving aircraft remanufactured as well, these being re-designated as SNB-5s and SNB-5Ps.[citation needed] The C-45 flew in US Air Force service until 1963, the USN retired their last SNB in 1972 while the U.S. Army flew their C-45s through 1976. In later years the military called these aircraft "bug smashers" in reference to their extensive use supplying mandatory flight hours for desk-bound aviators in the Pentagon.[9]

Some of the modifications created by independent engineering entrepreneurs were adopted in concept by the factory in later production versions in similar fashion to the current practice Harley Davidson copying of custom motorcycles built in the 1960s and 1970s.

Among the most notable cooling air and exhaust modifications were those engineered by Benjamin Israel while employed by Conrad Conversions. His modifications were based largely on creating a more efficient use of cooling air to reduce drag, a major detriment to cruise performance. Cruise performance was improved 10% or more at the same power settings as before the modifications. These modifications were largely copied on the factory produced G and H models. Beech 18s were used extensively by Air America during the Vietnam War; initially more-or-less standard ex-military C-45 examples were used, but then the airline had 12 aircraft modified by Conrad Conversions in 1963 and 1964 to increase performance and load-carrying capacity. The modified aircraft were known as Conrad Ten-Twos, as the maximum take-off weight (MTOW) was increased to 10,200 lb (4,600 kg).[10][11] The increase was achieved by several airframe modifications, including increased horizontal stabilizer angle-of-incidence, redesigned landing gear doors, and aerodynamically-improved wing tips. Air America then had Volpar convert 14 aircraft to turboprop power, fitted with Garrett AiResearch TPE-331 engines; modified aircraft were called Volpar Turbo Beeches and also had a further increase in MTOW to 10,286 lb (4,666 kg).[10]

Engineless Hamilton Westwind conversion at an airfield in Tennessee

A factory option at one point was the addition of JATO bottles on each engine nacelle which added the equivalent of 200 horsepower (150 kW) per engine for about 12 seconds. The most successful powerplant upgrade was that of the Pratt & Whitney Canada PT6 turbine engine and Hartzell propeller. This conversion was carried out by Hamilton Aircraft in the 1960s and 70s as the Hamilton Westwind, successfully extending the commercial life of the aging aircraft. The Westwind II added a fuselage stretch to provide seating for 17 passengers, the Westwind III seated eight and used the remainder of the extra room for cargo, and the Westwind IV added an extra stretch and a large cargo door.

The wing spar of the Model 18 is fabricated by welding an assembly of tubular steel. The configuration of the tubes and inadequate corrosion inhibitors, along with holes from after-market STC modifications have allowed the spar to become susceptible to corrosion and cracking while in service.[12] This prompted the FAA to issue an Airworthiness Directive in 1975, mandating the fitment of a spar strap to Model 18s. This led in turn to the retirement of a large number of Model 18s when owners determined that the aircraft were worth less than the cost of the modifications. Further requirements have been mandated by the FAA and other national airworthiness authorities, including regular removal of the spar strap to allow the strap to be checked for cracks and corrosion and the spar to be X-rayed. In Australia the airworthiness authority has placed a life limit on the airframe, beyond which aircraft are not allowed to fly.[13][14][15]

Version of Model 18B capable of being fitted with skis or floats.

Model C18S
Variant of B18S with seating for eight passengers, and equipment and minor structural changes.[21]

C-45D
Designation given to two AT-7 aircraft converted as passenger transports during manufacture. Re-designated UC-45D in January 1943.[28][29]

C-45E
Designation given to two AT-7 and four AT-7B aircraft converted as passenger transports during manufacture. Re-designated UC-45E in January 1943.[28][29] 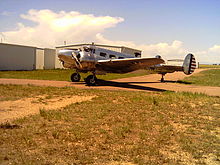 AT-11 Kansan
Bombing and gunnery trainer for USAAF derived from AT-7. Fuselage had small circular cabin windows, bombardier position in nose, and bomb bay; fitted with two machine guns, one in nose and one in a dorsal gun turret. 1,582 built for USAAF orders, with 24 ordered by Netherlands repossessed by USAAF and used by the Royal Netherlands Military Flying School at Jackson, Mississippi.[32][33]

F-2
Photo-reconnaissance version based on B18.[2]

JRB-1
Photographic aircraft for the US Navy, based on the C18S,[21] fitted with fairing over cockpit for improved visibility. 11 built.[34]

SNB-2H
Ambulance conversion for the US Navy.[35]

SNB-2P
Photo reconnaissance trainer for the US Navy.[35]

SNB-3
Variant for the US Navy, similar to AT-7C.

SNB-3Q
Electronic counter-measures trainer for the US Navy. 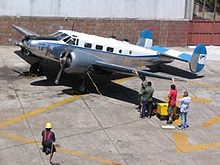 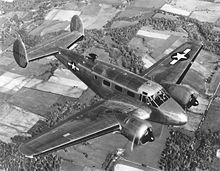 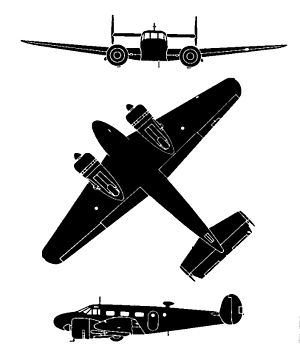