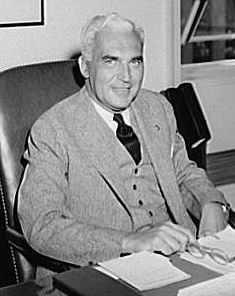 Paul Vories McNutt ( - ) was an American politician who served as of , high commissioner to the , administrator of the , chairman of the and ambassador to the Philippines.

Born in , McNutt was the only child of John C. and Ruth McNutt. He grew up in Indianapolis where his father had become of the Indiana Supreme Court and in Martinsville where his father later practiced law.

In 1909, McNutt entered Indiana University where he was active in campus politics, acted in student theater productions and was a close friend of , future Republican candidate for who, like McNutt, was then a Democrat.

After graduating from Indiana in 1913, McNutt went to , taking an extracurricular job as a United Press and sports writer. McNutt took his law degree from Harvard in 1916, then returned to Martinsville to be narrowly defeated in a race for Morgan County . The following year he took a job as assistant at the Indiana University School of Law, but quit to enlist in the when the United States entered .

Although McNutt became a in the field , he spent the war at bases in and . While in Texas, he met and married his wife, Kathleen. He left active service in 1919, but later became a full in the reserves.

After leaving military service, McNutt returned to his law school teaching job, becoming a full professor in 1920 and then, in 1925, the youngest dean in the school's history. He skillfully used both his university connections and his wartime experience to launch his political . As law school dean, he forcefully attacked pacifists and opponents of compulsory military training on college campuses. In 1927, he was elected of the Indiana department of the , an influential s' organization, and spoke frequently throughout the state.

In 1928, he decided that a run for governor would be too risky with the Catholic likely to be the Democratic nominee for president. fact|date=December 2007 Instead, McNutt sought and won the post of national commander of the American Legion. In 1932, Indiana's Democrats nominated him for governor. He won easily, swept along in that year's national Democratic landslide led by .

McNutt was a forceful and controversial governor. With an overwhelming Democratic majority in the , he reorganized state government, enacted a gross , legalized beer and wine sales in anticipation of the of federal , expanded welfare and relief programs and balanced the state budget. All of this nurtured McNutt's hopes that he might be nominated for president by the Democrats in 1940.

On the negative side, McNutt earned the reputation of an old-style machine politician by using the reorganization of state government to oust his opponents, both Republican and Democratic, from state jobs and by forcing state employees to pay two percent of their salaries to the Indiana Democratic Party. He had the legislature set up a system of exclusive franchises for beer distribution that went to his campaign contributors. He also had the legislature postpone the 1933 elections, adding an extra year to the terms of local officials, a majority of whom were Democrats.

Although McNutt's administration curtailed the use of court to prevent labor picketing, McNutt did not hesitate to declare in eleven -mining counties where major violence accompanied union efforts to organize the miners. In all, McNutt called out the Indiana National Guard three times in response to labor-related violence.

Indiana's kept McNutt from seeking re-election as governor in 1936, but he campaigned strongly for Roosevelt's re-election as president, making up for his failure to give early support to Roosevelt in 1932. In 1937, Roosevelt made him high commissioner of the , a post that McNutt thought would help him in a presidential bid in 1940 and which Roosevelt, contemplating a third term for himself, thought would effectively sideline McNutt.

With the Philippines largely self-governing, the post of high commissioner was mostly . Nevertheless, McNutt managed to stir controversy by appearing fussy over details of protocol. He also questioned the wisdom of giving early to the islands as promised in the 1934 , believing that the small country could not defend itself.

In a notable humanitarian act, McNutt, in cooperation with Commonwealth President , quietly persuaded the US Department of State to allow the entry each year into the Philippines of a thousand ish fleeing regimes in . The quota was raised to 1,200 in 1939. This was at a time when the refugees could not legally enter the United States itself in large numbers.

McNutt left the Philippines in 1939 to become head of Roosevelt's new , an umbrella office that managed an array of programs that ranged from the to Social Security. It also served as a cover agency from 1942 to 1944 for the , a secret program to develop chemical and biological . The FSA job gave McNutt high visibility, but his presidential hopes dissolved in the face of Roosevelt's determination to seek a third term. Although McNutt's name was floated as a possible ial running mate, Roosevelt apparently did not seriously consider the possibility, preferring the more liberal Secretary of Agriculture . Ironically, Roosevelt's opponent in 1940 was McNutt's Indiana University classmate Wendell Willkie, now a Republican.

McNutt loyally supported Roosevelt in 1940 and was given added responsibilities at the FSA in managing defense-related health and safety programs. In 1942, Roosevelt appointed him chairman of the , which was charged with planning to balance the labor needs of agriculture, industry and the armed forces, but the position carried little real power.

After 's surrender in 1945, President sent McNutt back to the Philippines for a second tour as high commissioner. Following Philippine independence on , McNutt served as America's first ambassador to the islands, a post he left in 1947 to take up law practice in New York and After serving as ambassador, he also chaired the , a business organization, and was a director of several firms in .

McNutt's prominence is demonstrated by his appearance on the covers of "Life" and "Time" magazines in 1939 when he returned from the Philippines, and on a "Time" cover in 1942 when he took the chair of the War Manpower Commission.

McNutt died in New York City, aged 63, and is buried in .

Paul V. McNutt Quadrangle, a residence hall complex at Indiana University-Bloomington, is named for him and has a bust of him the front foyer of the main building along with a display of ceremonial flags used during his service in the Philippines.