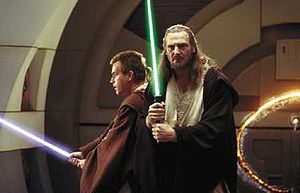 The Jedi are characters in the Star Wars universe and the series's main protagonists. The Jedi use a power called the Force and weapons called lightsabers, which emit a controlled energy flow in the shape of a sword, in order to serve and protect the Republic and the galaxy at large from conflict or governmental instability. Sometimes, the Jedi mediate peace negotiations among planets and other factions and, if necessary, use their formidable fighting skills to quickly end unrest or neutralize dangerous individuals. The Jedi are governed by a Council, consisting of twelve of the most powerful and wise members of the Jedi Order. They are bound to a code of morality and justice. The Jedi are trained to use the Force through rejection of passions and commitment to justice, as opposed to the ideals of the aggressive, highly passionate school known as the Dark side, favoring instead what is known in contrast as "the Light side."

The Jedi are first introduced in the 1977 motion picture Star Wars Episode IV: A New Hope as an order of warrior monks who serve as "the guardians of peace and justice in the galaxy" and embrace the mystical Force. Obi-Wan Kenobi (Alec Guinness) explains that the Galactic Empire had all but exterminated the Jedi some twenty years before the events of the film, and seeks to train Luke Skywalker (Mark Hamill) to be the Order's last hope. Darth Vader (David Prowse/James Earl Jones) is also established as the Jedi's main enemy. By the end of the film, Luke is on the path to becoming a Jedi. In the sequel, The Empire Strikes Back, Luke receives extensive Jedi training from the elderly (and only surviving) Jedi Master Yoda (Frank Oz), even as he learns that Vader is in fact his father, former Jedi Anakin Skywalker. The third film in the original trilogy, Return of the Jedi, ends with Luke redeeming Vader and helping to destroy the Empire, thus fulfilling his destiny as a Jedi.

The prequel films depict the Jedi as troubled by the resurgence of the dark side of the Force and determined to fight their mortal enemies, the Sith. In Star Wars Episode I: The Phantom Menace (1999), Jedi Master Qui-Gon Jinn (Liam Neeson) discovers nine year old Anakin Skywalker (Jake Lloyd), whom he believes to be the "Chosen One" of Jedi prophecy who is destined to bring balance to the Force; the boy is eventually paired with Qui-Gon's apprentice, the young Obi-Wan Kenobi (Ewan McGregor), who promises to train him. The sequel, Attack of the Clones, establishes that the Jedi forswear all emotional attachments, including romantic love, which proves problematic when the now 19 year old Anakin (Hayden Christensen) falls in love with Padmé Amidala (Natalie Portman), whom Qui-Gon Jinn and Obi-Wan Kenobi had served ten years before. In Revenge of the Sith, Palpatine (Ian McDiarmid), who is really the Sith Lord Darth Sidious, manipulates Anakin's love for Padmé in order to turn him to the dark side and become his apprentice, Darth Vader. Once corrupted, Vader helps Palpatine hunt down and destroy nearly all of the Jedi, leaving very few left, such as Jedi Master Yoda, and Obi-Wan-Kenobi.

The Jedi's history before and after the time-line of the films is established within several novels, comic books and video games in the Expanded Universe of Star Wars media.

Members of the order progress through four tiers of rank, at times referred to as levels:

In the Star Wars saga, the Jedi Temple is the official Jedi headquarters/school/monastery for Jedi. Located in the "Galactic City," the capital, Coruscant.

In the Star Wars Episode III: Revenge of the Sith film, the temple is attacked. Even though the temple was severely damaged and most of the Jedi perished, it was not completely destroyed, and is visible in the celebrations on Coruscant at the end of Return of the Jedi over twenty-five years later. The New Jedi Order indicates that the Jedi Temple on Coruscant is no longer standing but it is rebuilt as a gift to Jedi for their services and achievements during the Yuuzhan Vong invasion. The new temple is in the form of a massive pyramid made from stone and transparisteel that is designed to fit into the new look of Coruscant, though internally it is identical to the design seen in Revenge of the Sith.

Architects' Journal rated the temple third on its top-ten architecture of Star Wars list behind the second Death Star and Jabba the Hutt’s palace on Tatooine, and ahead of Coruscant, capital city of the Old Republic.[3] The temple is described in the article as adapting "the robust typology of Mayan temples, with durasteel cladding specified for the external stone walls for improved defensive strength" and said to be a ziggurat that "is built above a Force-nexus and has ample room for training facilities, accommodation and the Jedi Archive."[3] The temple has five towers, the tallest is Tranquillity Spire, that are stylistically similar to the minarets surrounding the Hagia Sophia in Istanbul.[3] Star Wars Insider listed it as the one hundredth greatest thing about Star Wars in its one hundredth issue special.

Other forms of Jedi

Dark Jedi is the name given in the Star Wars universe to fictional characters attuned to the Force and adept in its dark side. They exist by that name only in the Expanded Universe, including video games such as Star Wars: Knights of the Old Republic and the Jedi Knight series; the term is never used in any of the six Star Wars films.

Gray Jedi is the term that refers to Force Users in the Expanded Universe who have left either the Jedi Order or the Sith and do not believe that there is a strict division between the light and dark sides of the Force.[4]

Within the Star Wars universe, the Jedi are usually portrayed as dressed in simple robes and carrying specialized field gear for their missions. The most notable instrument wielded by a Jedi is the lightsaber.

Both the Jedi and the Sith use lightsabers. The Jedi wield blue, green, and purple lightsabers in the films, while the Sith tend to wield red ones.

Lightsabers can be many different colors depending on the crystal fixture. Although a Jedi class is usually defined by the color of the lightsaber, a Jedi can choose to make his/her lightsaber any color they see fit.

One of the enduring influences the Star Wars saga has had in popular culture is the idea of the fictional Jedi values being interpreted as a modern philosophical path or religion,[5] spawning various movements such as the controversial Jediism (religious) and the Jedi census phenomenon.

Jedi Knights have made their way into certain areas of pop culture, most notably: "Weird Al" Yankovic's song "The Saga Begins", a parody of "American Pie". The Jedi influence begins with the lyrics from "American Pie", This'll be the day that I die changed to Soon I'm gonna be a Jedi.

The 2009 film The Men Who Stare at Goats stars Ewan McGregor as a reporter named Bob Wilton who follows a former soldier (George Clooney) who claimed to be a "Jedi warriors", a nickname for psychic spies in the US military. McGregor previously starred as Jedi Knight Obi-Wan Kenobi in the prequel trilogy.