In mathematics, the harmonic series is the divergent infinite series:

Its name derives from the concept of overtones, or harmonics in music: the wavelengths of the overtones of a vibrating string are 1/2, 1/3, 1/4, etc., of the string's fundamental wavelength. Every term of the series after the first is the harmonic mean of the neighboring terms; the term harmonic mean likewise derives from music.

The fact that the harmonic series diverges was first proven in the 14th century by Nicole Oresme, but this achievement fell into obscurity. Proofs were given in the 17th century by Pietro Mengoli, Johann Bernoulli, and Jakob Bernoulli.

Historically, harmonic sequences have had a certain popularity with architects. This was so particularly in the Baroque period, when architects used them to establish the proportions of floor plans, of elevations, and to establish harmonic relationships between both interior and exterior architectural details of churches and palaces.[1]

The harmonic series is counterintuitive to students first encountering it, because it is a divergent series though the limit of the nth term as n goes to infinity is zero. The divergence of the harmonic series is also the source of some apparent paradoxes. One example of these is the "worm on the rubber band".[2] Suppose that a worm crawls along a 1 metre rubber band and, after each minute, the rubber band is uniformly stretched by an additional 1 metre. If the worm travels 1 centimetre per minute, will the worm ever reach the end of the rubber band? The answer, counterintuitively, is "yes", for after n minutes, the ratio of the distance travelled by the worm to the total length of the rubber band is

Because the series gets arbitrarily large as n becomes larger, eventually this ratio must exceed 1, which implies that the worm reaches the end of the rubber band. The value of n at which this occurs must be extremely large, however, approximately e100, a number exceeding 1040. Although the harmonic series does diverge, it does so very slowly.

Another example is: given a collection of identical dominoes, it is clearly possible to stack them at the edge of a table so that they hang over the edge of the table. The counterintuitive result is that one can stack them in such a way as to make the overhang arbitrarily large, provided there are enough dominoes.[2][3]

There are several well-known proofs of the divergence of the harmonic series. Two of them are given below.

One way to prove divergence is to compare the harmonic series with another divergent series:

for every positive integer k.

This proof, due to Nicole Oresme, is considered by some a high point of medieval mathematics. It is still a standard proof taught in mathematics classes today. Cauchy's condensation test is a generalization of this argument. 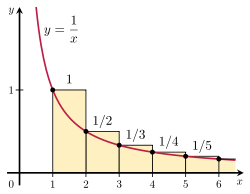 It is possible to prove that the harmonic series diverges by comparing its sum with an improper integral. Specifically, consider the arrangement of rectangles shown in the figure to the right. Each rectangle is 1 unit wide and 1 / n units high, so the total area of the rectangles is the sum of the harmonic series:

However, the total area under the curve y = 1 / x from 1 to infinity is given by an improper integral:

Since this area is entirely contained within the rectangles, the total area of the rectangles must be infinite as well. More precisely, this proves that

The generalization of this argument is known as the integral test.

The harmonic series diverges very slowly. For example, the sum of the first 1043 terms is less than 100.[4] This is because the partial sums of the series have logarithmic growth. In particular,

where γ is the Euler–Mascheroni constant and

which approaches 0 as k goes to infinity. This result is due to Leonhard Euler. He proved also the more striking fact that the sum which includes only the reciprocals of primes already diverges, i.e.

The nth partial sum of the diverging harmonic series,

is called the nth harmonic number.

The difference between the nth harmonic number and the natural logarithm of n converges to the Euler–Mascheroni constant.

The difference between distinct harmonic numbers is never an integer.

No harmonic numbers are integers, except for n = 1.[5] 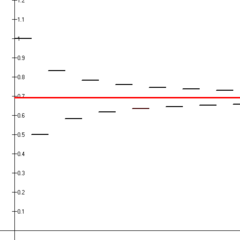 This formula is a special case of the Mercator series, the Taylor series for the natural logarithm.

A related series can be derived from the Taylor series for the arctangent:

This is known as the Leibniz formula for pi.

The general harmonic series is of the form

and b are real numbers.

By the comparison test, all general harmonic series diverge. [6]

A generalization of the harmonic series is the p-series, defined as:

For any convex, real-valued function φ such that

The depleted harmonic series where all of the terms in which the digit 9 appears anywhere in the denominator are removed can be shown to converge and its value is less than 80.[10] In fact when terms containing any particular string of digits are removed the series converges.