The series ended its two-and-a-half-year run on Cartoon Network on March 27, 2008 with the series finale episode "Lumpus' Last Stand" after 5 seasons and 61 episodes.

After the end of the production of Rocko's Modern Life, Murray kept a notebook of ideas for television shows and books. Murray attributes some of his most fond memories to days at summer camp; Murray said that he attended summer camp every summer for "4 or 5 years in a row" and that he "couldn't really get the scouting thing down." He also described cartoons with pastoral settings such as the Bugs Bunny cartoons of the Looney Tunes and Merrie Melodies series and Yogi Bear as having a "calming" effect due to the tree-filled backgrounds. At the time he believed that too many futuristic, themes appeared in media and literature, so he wished to create a series that would "get back to nature."[1] Camp Lazlo originated from a camp-related children's book series concept by Murray that, according to him, "outgrew it’s medium." [sic] As Murray developed the concept, he felt that his "lunatic characters wanted to live" and decided that a simple story could not sufficiently house his characters. Murray desired to create a series about a group of children without "high tech stimulus" and "in nature."[2]

Linda Simensky, who had previously worked with Murray on Rocko, had since moved to Cartoon Network and called Murray to solicit a new series. After an initial hesitation, Murray sent Simensky[3] the idea for a show with a working title of 3 Beans. Simensky "thought it sounded too much like a salad", so Murray changed the name to Camp Lazlo. When approval was given, Murray decided to produce the show at Cartoon Network Studios and brought Mark O'Hare on as co-producer.[4]

According to Murray, the "green light" to start Lazlo had been initially given and later revoked, leaving Murray and Mark O'Hare "pissed" and "depressed." Murray believed that an executive was not "completely sold" with starting production for Camp Lazlo. Murray worked to have the series receive its final, definite approval.[5]

Murray felt that Camp Lazlo successfully appealed to younger children because his prior experiences with his own children helped him determine details that children found humorous. Murray said that he resisted the urge inside of him to micromanage the production and instead approved aspects and contributions related to the show. He said that he had "a lot of pre-production time" and therefore details became established before the show aired on television.[1]

His main philosophies expressed in the show include the phrase “be who you are" and that one should question authority unless the issue is "a safety issue." Murray said that he avoids sending "messages" to children and that he hoped that his television show did not contain "too many messages."[1]

Murray said that he likes storybook art and the works of Pablo Picasso and Henri Matisse; the styles influenced the visual style of Camp Lazlo. He also describes "great comic book artists" as important to himself and Mark O'Hare.[1]

The team created some backgrounds using "Acryl Gouache," a mixture of acrylic paint and gouache.[10]

The show features the adventures of three major characters: Lazlo, the title character, is a spider monkey from São Paulo, Brazil[11] with a carefree attitude; Raj, an Asian Indian elephant[11] who is more level-headed; and Clam, an albino pygmy rhino, who speaks in bursts of one or two words, synonymously echoing his friends statements. 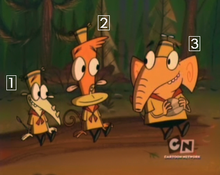 In the United Kingdom Camp Lazlo aired on Cartoon Network and Boomerang.

In Australia, India, and Latin America Camp Lazlo is shown on the Cartoon Network.

In Turkey, Camp Lazlo is reruns on the Cartoon Network

The setting of the show was designed to deliberately bring a nostalgic feeling of childhood summer camps and "evoke a comfortable place to visit." The colors instill the feeling of summer camp, and rather than basing color schemes on real-life colors; Murray and Sue Mondt, the art director, chose the colors. In Camp Lazlo, the sky can be yellow, and trees are not always green and brown. For the architecture and objects, books with cabins, camps and Native American artifacts were consulted. Ultimately, Murray wanted to create a place where nature prevails, and the hustle and bustle of real-life is left behind, with no technology to distract from the impressions of camp life. He describes the camp as having a "retro" feel. Murray likes 1950s and early 1960s designs of objects like advertising art, lamps, and old vacation brochures, and he said that the "brushy quality that developed at that time" heavily influenced the setting.[1]

Camp Kidney is the camp where most of the show takes place. This is a summer camp attended by a group of boy scout-like campers called The Bean Scouts. In keeping the theme of the name of the camp, the campers are allowed to name their cabins after various types of beans: Jelly Cabin, Pinto Cabin, Fava Cabin, and so on. The camp is known for a low standard of quality, and has been threatened with closure more than once. The camp is led by Scoutmaster Lumpus, with most of the administrative details assigned to his assistant, Mr. Slinkman. A full staff complements the camp, including a nurse and a chef. Ginia Bellafante of The New York Times said that if she became "socio-analytical about the Lazlo enterprise," Camp Kidney appears to be a stand-in for "our culture of obsessive parenting."[16]

Both Camp Kidney and Acorn Flats are part a larger hierarchical organization, under the direct command of Commander Hoo-ha, with "The Big Bean" as the head of all scout chapters, which includes Beans and Squirrels and (possibly) Tomato Scouts.

Prickly Pines is a town near both camps with full commercial facilities: a post office, several restaurants, a laundromat, and other sundry stores.

The exact geographical locations of these settings is unknown.

Murray said that, as he did in Rocko's Modern Life, he matched the personalities of characters to various animals.[1]

Murray asked many staff members who participated in creating Rocko's Modern Life to return and perform duties for Camp Lazlo, describing his main tactic to attract the crew as "coercion." Murray wanted the Rocko's Modern Life crew as it "knows my sensibilities" and gained ten years of experience. Crew members of Rocko's Modern Life, such as Robert Scull or Peter Burns, have worked on this show.[1]

For Season One, Murray hired among others comedy writer Martin Olson, who had collaborated with Murray on some of the most successful stories for Rocko's Modern Life. Murray asked Tom Kenny to voice characters because Murray felt that Kenny "adds writing to his roles" and "brings so much." Murray looked for "comedic timing" in his voice actors, and therefore he used many stand-up comics and sketch actors.[1]

The team remixed and edited many songs for use in Camp Lazlo. For instance, the main theme song plays on the children's song "B-I-N-G-O" replacing it with "L-A-Z-L-O". The team also remade "She'll Be Coming 'Round the Mountain". The team created its own camp songs. Andy Paley created bluegrass and cowboy swing songs for Camp Lazlo. Murray said that the team often used "strange instruments" such as washboards and spoons to create the music. Murray added that one woman created music with a saw.[1]

The music score for the show was composed by Andy Paley, as well as the music tracks from the libraries of Associated Production Music and Capitol Records.

Some composers use musics from the Nickelodeon show SpongeBob SquarePants.

The series won three 2006 Pulcinella Awards for Best Animated Series for Children and Best Animated Series for all ages and Lazlo was the winner of Best Character at the 10th Cartoons By The Bay Festival in Positano, Italy.[9][17] It was the second consecutive year that a Cartoon Network series won the latter two awards, as the Foster's Home for Imaginary Friends character, Blooregard Q. Kazoo, won the award the year before.

Kathie Huddleston, a reporter for the Science Fiction Weekly, created a favorable review of Camp Lazlo.[25]

The Atlanta Journal-Constitution reviewed the series and gave it an "A."[26]

Joly Herman of Common Sense Media posted a review of Camp Lazlo on Go.com. Herman describes the humor used in the Camp Lazlo as making it an "unpredictable show for younger viewers." Herman gave the show two stars out of five.[27]

Prior to Camp Lazlo's premier on Cartoon Network, a Press Kit for the show was given away as a promotional item, containing fact sheets on the show and a DVD with four episodes (2 half-hour episodes): Gone Fishin' (Sort Of) / Bean Are From Mars and Parasitic Pal / It's No Picnic. This item is only available through a second-hand market.

On July 18, 2007, Madman Entertainment of Australia released a set of two DVDs encoded for Region 4 of Season One episodes. No further information is available about a Region 1 release or additional seasons.

The entire series can now be purchased on iTunes.

A videogame for the Nintendo Game Boy Advance called Camp Lazlo: Leaky Lake Games was released on November 6, 2006 as a tie-in to the show. The game is published by Crave Entertainment and developed by Collision Studios. The player plays as the three main characters (Lazlo, Clam and Raj) to compete in a series of game challenges and earn merit badges in the Leaky Lake Games event. That will allow them to compete against the Squirrel Scouts in a final tournament. In the game, the player meets characters, such as Scoutmaster Lumpus, Slinkman, Edward, and many others to receive hints and directions in achieving goals in the game. They trigger some of the mini-games, which are all timed. The game received generally mixed reviews.[29]

Camp Lazlo characters appeared in a commercial for McDonald's and in Happy Meals. Murray did not want for the series to be used in Happy Meals; the only action he could take was refusing to appear in the television commercials. Murray stated on his website that he will not explain his opposition to Happy Meals due to his respect for the effort placed by Cartoon Network "marketing people." Murray stated that his opinions are his alone and do not reflect the opinions of Cartoon Network. He said that he appreciates Cartoon Network's "campaign for healthier eating habits for kids." "C" Raggio, a character designer, appeared in the commercials instead.[30][31]