ArtScroll is an imprint of translations, books and commentaries from an Orthodox Jewish perspective published by Mesorah Publications, Ltd., a publishing company based in Brooklyn, New York. Its general editors are Rabbis Nosson Scherman and Meir Zlotowitz.

In 1975,[1] Zlotowitz, a graduate of Mesivtha Tifereth Jerusalem, was director of a high-end graphics studio in New York.[2] The firm, named ArtScroll Studios,[1] produced brochures,[3] invitations, awards and ketubahs.[1] Rabbi Nosson Scherman, then principal of Yeshiva Karlin Stolin Boro Park,[1] was recommended to Zlotowitz as someone who could write copy, and they collaborated on a few projects.[4]

In late 1975,[1] a close friend of Zlotowitz, Rabbi Meir Fogel, died in his sleep, prompting Zlotowitz to want to do something to honor his memory. As Purim was a few months away, he decided to write an English translation and commentary on the Book of Esther, and asked Scherman to write the introduction. The book was completed in honor of the shloshim (the 30-day commemoration of a death)[1] and sold out its first edition of 20,000 copies within two months.[5] With the encouragement of Rabbi Moses Feinstein, Rabbi Yaakov Kamenetsky, and other Gedolei Yisrael, the two continued producing commentaries, beginning with a translation and commentary on the rest of the Five Megillot (Song of Songs, Ecclesiastes, Lamentations and Ruth),[6] and went on to publish translations and commentaries on the Torah, Prophets, Talmud, Passover Haggadah, siddurs and machzors. The name ArtScroll was chosen for the publishing company to emphasize the visual appeal of the books.[7] In its first 25 years, ArtScroll produced more than 700 books, including novels, history books, children's books and secular textbooks,[2] and is now one of the largest publishers of Jewish books in the United States.[3] 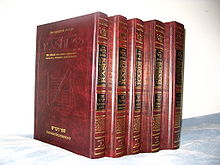 ArtScroll publishes books on a variety of Jewish subjects. The best known is probably an annotated Hebrew-English siddur ("prayerbook") (the best-selling The ArtScroll Siddur). In recent years its Torah translation and commentary, a series of translations and commentaries on books of the Tanach (Hebrew Bible), and an English translation and elucidation of the Babylonian Talmud have enjoyed great success. Other publications include works on Jewish Law, novels and factual works based on Jewish life or history, and cookbooks.

Mesorah Publications received widespread acclaim in response to its ArtScroll line of prayerbooks, starting with The Complete ArtScroll Siddur, Ed. Nosson Scherman, 1984. This work gained wide acceptance in the Orthodox Jewish community, and within a few years became a best-selling Hebrew-English siddur (prayerbook) in the United States. It offered the reader detailed notes and instructions on most of the prayers and versions of this prayerbook were produced for the High Holidays, and the three pilgrimage festivals Passover, Sukkot and Shavuot.

While ArtScroll books are not used as the official Torah commentaries by any non-Orthodox synagogues[citation needed], they have some usage in the non-Orthodox Jewish community and many Reform and Conservative Jews have purchased copies.

Since the advent of ArtScroll, a number of Jewish publishers have printed books and siddurim with similar typefaces and commentary, but with a different commentary and translation philosophy.

In 2003 ArtScroll published a cookbook by Susie Fishbein entitled Kosher By Design: Picture-perfect food for the holidays & every day. The cookbook contains both traditional recipes and updated versions of traditional recipes.[8] All the recipes are kosher and the book puts an emphasis on its food photography.[3][9] Since publication the book has sold over 400,000 copies from 2003 through 2010[3][10] and Fishbein has become a media personality, earning the sobriquets of "the Jewish Martha Stewart" and the "kosher diva".[8] ArtScroll has realized the books' salability by extending beyond its traditional Orthodox Jewish market into the mainstream market, including sales on Amazon, at Barnes & Noble[11] and Christian evangelical booksellers,[8] in Williams-Sonoma stores, and in supermarkets.[11]

Works published by Mesorah under this imprint adhere to a perspective appealing to many Orthodox Jews, but especially to Orthodox Jews who have come from less religious backgrounds, but are returning to the faith (Baalei Teshuva). Due to the makeup of the Jewish community in the USA, most of the prayer books are geared to the Ashkenazic custom. In more recent years, Artscroll has collaborated with Sephardic community leaders in an attempt to bridge this gap. Examples of this include a Sephardic Haggadah published by Artscroll, written by Sephardic Rabbi Eli Mansour, and the book Aleppo, about a prominent Sephardic community in Syria.

In translations and commentaries, ArtScroll works with the traditional framework of Halakha (Jewish law) accepting midrashic accounts in a historical fashion, and at times literally, and generally disregards (and occasionally disagrees with) textual criticism.

Mesorah has a line of Mishnah translations and commentaries, and a line of Babylonian Talmud translations and commentaries, The Schottenstein Edition of The Talmud Bavli ("Babylonian Talmud"). The set of Talmud was completed in late 2004, giving a 73 volume English edition of the entire Talmud. This was the second complete translation of the Talmud into English (the other being the Soncino Talmud published in the United Kingdom during the mid-twentieth century).

The first volume, Tractate Makkos, was published in 1990, and dedicated by Mr. and Mrs. Marcos Katz. Jerome Schottenstein was introduced to the publication committee shortly thereafter. He began by donating funds for the project in memory of his parents Ephraim and Anna Schottenstein one volume at a time, and later decided to back the entire project. When Jerome died, his children and widow, Geraldine, rededicated the project to his memory in addition to those of his parents. The goal of the project was to, "open the doors of the Talmud and welcome its people inside."

ArtScroll's English explanations and footnoted commentary in the Schottenstein Edition of the Talmud are based on the perspective of classical Jewish sources. The clarifying explanation is generally based on the viewpoint of Rashi, the medieval commentator who wrote the first comprehensive commentary on the Talmud. The Schottenstein Edition does not include contemporary academic or critical scholarship.

The total cost of the project is estimated at US$21 million, most of which was contributed by private donors and foundations. Some volumes have up to 2 million copies in distribution, while more recent volumes have only 90,000 copies currently printed. A completed set was dedicated on February 9, 2005, to the Library of Congress, and the siyum (celebration at the "completion") was held on March 15, 2005, the 13th yahrzeit of Jerome Schottenstein, at the New York Hilton.

Mesorah and the Schottenstein family have also begun a Hebrew version of the commentary and have begun both an English and Hebrew translation of the Talmud Yerushalmi (Jerusalem Talmud).

Artscroll publications, such as the Stone Editions of Tanakh (Hebrew Bible) and Chumash (Pentateuch) use many more transliterated Hebrew words rather than than English words, compared to editions such as the Tanakh of the Jewish Publication Society. This reflects a higher use of untranslated Hebrew terminology in Haredi English usage.

The two major differences between the way Sefardi and Ashkenazi Hebrew dialects are transcribed are as follows:

As such you would have the following transliterations:

This line of books has come under criticism from some scholars (both Orthodox and non-Orthodox) on a number of points:

As with the previously published books, we began with a new, free-flowing translation of the text - not always literal, but faithful to Rabbinic interpretation. Designed to be as readable as possible, the translation removed many of the "surface difficulties" dealt with by the Midrash, Rashi and Ibn Ezra, by incorporating their interpretations into the translation.

Dikduk (grammar) is anathema in many Jewish circles, but the translation and presentation of texts is, to a large extent, a philological activity and must be philologically accurate. The Artscroll effort has not achieved a respectable level. There are dozens of cases where prepositions are misunderstood, where verb tenses are not perceived properly and where grammatical or linguistic terms are used incorrectly. Words are often vocalized incorrectly. These observations, it should be stressed, are not limited to the Bible text but refer to the talmudic, midrashic, targumic, medieval and modern works as well. Rabbinical passages are removed from their contexts, presented in fragmentary form thus distorting their contents, emended to update their messages even though these new ideas were not expressed in the texts themselves, misvocalized, and mistranslated: i.e. misrepresented.[12]