This article is about the mammal. For other uses, see Ferret (disambiguation).

The ferret is a domesticated mammal of the type Mustela putorius furo. Ferrets are sexually dimorphic predators with males being substantially larger than females. They typically have brown, black, white, or mixed fur. They have an average length of 20 inches (51 cm) including a 5 inch (13 cm) tail, weigh about 1.5–4 pounds (0.7–2 kg), and have a natural lifespan of 7 to 10 years.[1]

Several other small, elongated carnivorous mammals belonging to the family Mustelidae (weasels) also have the word ferret in their common names, including an endangered species, the Black-footed Ferret. The ferret is a very close relative of the polecat, but it is as yet unclear whether it is a domesticated form of the European Polecat, the Steppe Polecat, or some hybrid of the two.

The history of the ferret's domestication is uncertain, like that of most other domestic animals, but it is likely that ferrets have been domesticated for at least 2,500 years. They are still used for hunting rabbits in some parts of the world today, but increasingly they are kept simply as pets.

Being so closely related to polecats, ferrets are quite easily able to hybridize with them, and this has occasionally resulted in feral colonies of polecat-ferret hybrids that have been perceived to have caused damage to native fauna, perhaps most notably in New Zealand. As a result, some parts of the world have imposed restrictions on the keeping of ferrets.

As described by the Oakland Zoo,

Ferrets have a long and slender body covered with brown, black, white, or mixed fur ... Average length is 20 inches including a 5-inch tail. They weigh 1.5 to 4 pounds, with males substantially larger than females ... Gestation is 42 days, litters are usually 3 to 7 young, but sometimes more. Females may have two to three litters annually. Young are weaned after 3 to 6 weeks and become independent at 3 months. Sexual maturity may come at 6 months. Average life span is 8 years.[2]
—Conservation and Education: Oakland Zoo

Ferrets are crepuscular, which means they spend 14–18 hours a day asleep and are most active around the hours of dawn and dusk.[3] Unlike their polecat ancestors, which are solitary animals, most ferrets will live happily in social groups. A group of ferrets is commonly referred to as a "business."[citation needed] They are territorial, like to burrow, and prefer to sleep in an enclosed area.[4]

When excited, they may perform a routine commonly referred to as the weasel war dance, characterized by a frenzied series of sideways hops and bumping into things. Despite its zeal, this is not aggressive but is a joyful invitation to play. It is often accompanied by a soft clucking noise, commonly referred to as dooking.[8] When agitated or upset, on the other hand, ferrets will make a distinct hissing noise.[9] 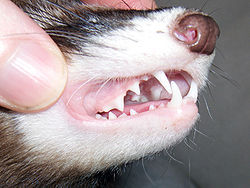 Ferrets are known to suffer from several distinct health problems. Among the most common are cancers affecting the adrenal glands, pancreas, and lymphatic system. Viral diseases include canine distemper and influenza. Health problems can occur in unspayed females when not being used for breeding. Certain health problems have also been linked to ferrets being neutered before reaching sexual maturity. Certain colors of ferret may also carry a genetic defect known as Waardenburg syndrome. Similar to domestic cats, ferrets can also suffer from hairballs and dental problems.

Women hunting rabbits with a ferret in the Queen Mary Psalter

In common with most domestic animals, the original reason for ferrets' being domesticated by human beings is uncertain, but it may have involved hunting. It was most likely domesticated from the European polecat (Mustela putorius), although it is also possible that ferrets are descendants of the Steppe polecat (Mustela eversmannii), or some hybridization thereof.[12] Analysis of mitochondrial DNA suggests that ferrets were domesticated around 2,500 years ago, although what appear to be ferret remains have been dated to 1500 BC.[13] It has been claimed that the ancient Egyptians were the first to domesticate ferrets, but as no mummified remains of a ferret have yet been found, or any hieroglyph of a ferret, and no polecat now occurs wild in the area, that idea seems unlikely.[14]

The Greek word ictis occurs in a play written by Aristophanes, The Acharnians, in 425 BC. Whether this was a reference to ferrets, polecats, or the similar Egyptian Mongoose is uncertain.[15] The name "ferret" is derived from the Latin furittus, meaning "little thief", a likely reference to the common ferret penchant for secreting away small items.[16] Ferrets were probably used by the Romans for hunting.[17][18]

Colonies of feral ferrets have established themselves in areas where there is no competition from similarly sized predators, such as in the Shetland Islands and in remote regions in New Zealand. Where ferrets coexist with polecats, hybridization is common. It has been claimed that New Zealand has the world's largest feral population of ferret-polecat hybrids.[19] In 1877, farmers in New Zealand demanded that ferrets be introduced into the country to control the rabbit population, which was also introduced by humans. Five ferrets were imported in 1879, and in 1882–1883, 32 shipments of ferrets were made from London, totaling 1,217 animals. Only 678 landed, and 198 were sent from Melbourne, Australia. On the voyage, the ferrets were mated with the European polecat, creating a number of hybrids that were capable of surviving in the wild. In 1884 and 1886, close to 4,000 ferrets and ferret hybrids, 3,099 weasels and 137 stoats were turned loose.[20] Concern was raised that these animals would eventually prey on indigenous wildlife once rabbit populations dropped, and this is exactly what happened to New Zealand bird species which previously had no mammalian predators.

Muzzled ferret flushing a rat, as illustrating in Harding's Ferret Facts and Fancies (1915)

For millennia, the main use of ferrets was for hunting, or ferreting. With their long, lean build, and inquisitive nature, ferrets are very well equipped for getting down holes and chasing rodents, rabbits and moles out of their burrows. Caesar Augustus sent ferrets or mongooses (named "viverrae" by Plinius) to the Balearic Islands to control the rabbit plagues in 6 BC.[21][22] They are still used for hunting in some countries, including the United Kingdom, where rabbits are considered a plague species by farmers. The practice is illegal in several countries where it is feared that ferrets could unbalance the ecology. In 2009 in Finland, where ferreting was previously unknown, the city of Helsinki began to use ferrets to restrict the city's rabbit population to a manageable level. Ferreting was chosen because in populated areas it is considered to be safer and less ecologically damaging than shooting the rabbits. In England, in 1390, a law was enacted restricting the use of ferrets for hunting to the relatively wealthy:

it is ordained that no manner of layman which hath not lands to the value of forty shillings a year shall from henceforth keep any greyhound or other dog to hunt, nor shall he use ferrets, nets, heys, harepipes nor cords, nor other engines for to take or destroy deer, hares, nor conies, nor other gentlemen's game, under pain of twelve months' imprisonment.[23]

Ferrets were first introduced into the New World in the 17th century, and were used extensively from 1860 until the start of World War II to protect grain stores in the American West from rodents. 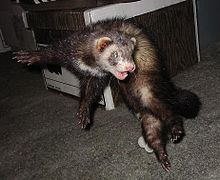 A ferret in a war dance jump.

Other uses of ferrets

Ferrets are an important experimental animal model for human influenza,[25][26] and have been used to study the 2009 H1N1 (swine flu) virus.[27] Smith, Andrews, Laidlaw (1933) inoculated ferrets intra-nasally with human naso-pharyngeal washes, which produced a form of influenza that spread to other cage mates. The human influenza virus (Influenza type A) was transmitted from an infected ferret to a junior investigator, from whom it was subsequently re-isolated. 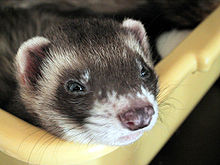 Typical ferret coloration, known as a sable or polecat-colored ferret

Most ferrets are either albinos, with white fur and pink eyes, or display the typical dark masked Sable coloration of their wild polecat ancestors. In recent years fancy breeders have produced a wide variety of colors and patterns. Color refers to the color of the ferret's guard hairs, undercoat, eyes, and nose; pattern refers to the concentration and distribution of color on the body, mask, and nose, as well as white markings on the head or feet when present. Some national organizations, such as the American Ferret Association, have attempted to classify these variations in their showing standards.[31]

There are four basic colors. The Sable (including chocolate and dark), Albino, Dark Eyed White (DEW), and the silver. All the other colors of a ferret are variations on one of these four categories.

Ferrets with a white stripe on their face or a fully white head, primarily blazes, badgers, and pandas, almost certainly carry a congenital defect which shares some similarities to Waardenburg syndrome. This causes, among other things, a cranial deformation in the womb which broadens the skull, white face markings, and also partial or total deafness. It is estimated as many as 75 percent of ferrets with these Waardenburg-like colorings are deaf.

White ferrets were favored in the Middle Ages for the ease in seeing them in thick undergrowth. Leonardo da Vinci's painting Lady with an Ermine is likely mislabelled; the animal is probably a ferret, not a stoat, (for which "ermine" is an alternative name for the animal in its white winter coat). Similarly, the Ermine portrait of Queen Elizabeth the First shows her with her pet ferret, which has been decorated with painted-on heraldic ermine spots.

"The Ferreter's Tapestry" is a 15th-century tapestry from Burgundy, France, now part of the Burrell Collection housed in the Glasgow Museum and Art Galleries. It shows a group of peasants hunting rabbits with nets and white ferrets. This image was reproduced in Renaissance Dress In Italy 1400–1500, by Jacqueline Herald, Bell & Hyman – ISBN 0-391-02362-4.

Gaston Phoebus' Book Of The Hunt was written in approximately 1389 to explain how to hunt different kinds of animals, including how to use ferrets to hunt rabbits. Illustrations show how multicolored ferrets that were fitted with muzzles were used to chase rabbits out of their warrens and into waiting nets.

Regulation of ferrets as pets

Ferrets cannot be imported into Australia. A report drafted in August 2000 seems to be the only effort made to date to change the situation.[44]

Ferrets brought from anywhere except the US require a Permit to Import from the Canadian Food Inspection Agency Animal Health Office. Ferrets from the US require only a vaccination certificate signed by a veterinarian. Ferrets under three months old are not subject to any import restrictions.[45]

As of July 2004, dogs, cats, and ferrets can travel freely within the European Union under the Pet passport scheme. To cross a border within the EU, ferrets require at minimum an EU PETS passport and an identification microchip (though some countries will accept a tattoo instead). Vaccinations are required; most countries require a rabies vaccine, and some require a distemper vaccine and treatment for ticks and fleas 24 to 48 hours before entry. Ferrets occasionally need to be quarantined before entering the country. PETS travel information is available from any EU veterinarian or on government websites.

The UK accepts ferrets under the EU's PETS travel scheme. Ferrets must be microchipped, vaccinated against rabies, and documented. They must be treated for ticks and tapeworms 24 to 48 hours before entry. They must also arrive via an authorized route. Ferrets arriving from outside the EU may be subject to a six-month quarantine.[46]