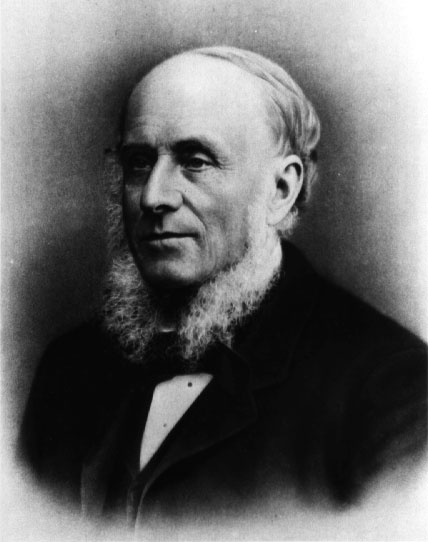 :"A different Alexander Bain invented the electric clock, and ."

He was born in Watten, and went to school there, but took up the profession of a weaver, hence the punning description of him as Weevir, "rex philosophorum". In 1836 he entered , and came under the influence of , professor of mathematics, Thomas Clark, professor of , and William Knight, professor of natural philosophy. His college career was distinguished, especially in mental philosophy, and . Towards the end of his arts course he became a contributor to the "Westminster Review" (first article "Electrotype and Daguerreotype," September 1840).

This was the beginning of his connection with , which led to a lifelong friendship. In 1841, Bain substituted for Dr Glennie, the professor of moral philosophy, who, through ill-health, was unable to discharge his academic duties. He continued to do this three successive terms, during which he continued writing for the "Westminster", and also helped Mill with the revision of the manuscript of his "System of Logic" (1842). In 1843 he contributed the first review of the book to the "London and Westminster".

In 1845 he was appointed professor of mathematics and natural philosophy in the Andersonian . A year later, preferring a wider field, he resigned the position and devoted himself to writing. In 1848 he moved to London to fill a post in the Board of Health, under some circumstances

, and became a prominent member of the brilliant circle which included and John Stuart Mill. In 1855 he published his first major work, "The Senses and the Intellect", followed in 1859 by "The Emotions and the Will". These treatises won him a position among independent thinkers. He was examiner in logical and moral philosophy (1857-1862 and 1864-1869) to the , and in moral science in the examinations.

In 1860 he was appointed by the crown to the new chair of and at the (created by the amalgamation of the two colleges, King's and Marischal, by the Scottish Universities Commission of 1858). Up to this date neither logic nor English had received adequate attention in Aberdeen, and Bain devoted himself to supplying these deficiencies. He succeeded not only in raising the standard of education generally in the north of Scotland, but also in forming a school of philosophy and in widely influencing the teaching of English and composition. His efforts were first directed to the preparation of textbooks: "Higher English Grammar" [ [http://books.google.ca/books?vid=ISBN1402181566&id=vVLAFrEvSzoC "Higher English Grammar" at Google Books] ] and "An English Grammar" [ [http://books.google.ca/books?vid=0Uu3Ii85L5ygbkTV&id=P3ECAAAAQAAJ "An English Grammar" at Google Books] ] were both published in 1863, followed in 1866 by the "Manual of Rhetoric", in 1872 by "A First English Grammar", and in 1874 by the "Companion to the Higher Grammar". These works were wide-ranging and their original views and methods met with wide acceptance.

His own philosophical writings already published, especially "The Senses and the Intellect" (to which was added, in 1861, The "Study of Character", including an "Estimate of Phrenology"), were too large for effective use in the classroom. Accordingly in 1868, he published his "Manual of Mental and Moral Science", mainly a condensed form of his treatises, with the doctrines re-stated, and in many instances freshly illustrated, and with many important additions. The year 1870 saw the publication of the "Logic". This, too, was a work designed for the use of students; it was based on JS Mill, but differed from him in many particulars, and was distinctive for its treatment of the doctrine of the conservation of energy in connection with causation and the detailed application of the principles of logic to the various sciences. His services to education in were now recognized by the conferment of the honorary degree of doctor of laws by the university of Edinburgh in 1871. Next came two publications in the "International Scientific Series", namely, "Mind and Body" (1872), and "Education as a Science" (1879).

All these works, from the "Higher English Grammar" downwards, were written by Bain during his twenty years as a professor at Aberdeen. He also started the philosophical journal, "Mind"; the first number appeared in January 1876, under the editorship of a former pupil, , of . To this journal Bain contributed many important articles and discussions; and in fact he bore the whole expenses of it till Robertson, owing to ill-health, resigned the editorship in 1891.

He was succeeded by , one of his most brilliant pupils. Nevertheless his interest in thought, and his desire to complete the scheme of work mapped out in earlier years, remained as keen as ever. Accordingly, in 1882 appeared the "Biography of ", and accompanying it "John Stuart Mill: a Criticism, with Personal Recollections". Next came (1884) a collection of articles and papers, most of which had appeared in magazines, under the title of "Practical Essays". This was succeeded (1887, 1888) by a new edition of the "Rhetoric", and along with it, a book "On Teaching English", being an exhaustive application of the principles of rhetoric to the criticism of style, for the use of teachers; and in 1894 he published a revised edition of "The Senses and the Intellect", which contain his last word on psychology. In 1894 also appeared his last contribution to "Mind". His last years were spent in privacy at Aberdeen, where he died. He married twice but left no children.

Bain took a keen interest and frequently an active part in the political and social movements of the day; after his retirement from the chair of logic, he was twice elected lord rector of the university (1881, ?), each term of office extending over three years. He was a strenuous advocate of reform, especially in the teaching of sciences, and supported the claims of modern languages to a place in the curriculum. A marble bust of him stands in the public library and his portrait hangs in the Marischal College. Although his influence as a logician, a grammarian and a writer on rhetoric was considerable, his reputation rests on his psychology. At one with Johannes Müller in the conviction "psychologus nemo nisi physiologus", he was the first in Great Britain during the 19th century to apply physiology in a thoroughgoing fashion to the elucidation of mental states. He was the originator of the theory of psycho-physical parallelism, which is used so widely as a working basis by modern psychologists. His idea of applying the natural history method of classification to psychical phenomena gave scientific character to his work, the value of which was enhanced by his methodical exposition and his command of illustration. In line with this, too, is his demand that should be cleared of ; and to his lead is no doubt due in great measure the position that psychology has now acquired as a distinct positive science.

calls his work the "last word" of the earlier stage of psychology, but he was in reality the pioneer of the new. Subsequent psycho-physical investigations "have all been in" the spirit of his work; and although he consistently advocated the introspective method in psychological investigation, he was among the first to appreciate the help that may be given to it by animal and social and infant psychology. He may justly claim the merit of having guided the awakened psychological interest of British thinkers of the second half of the 19th century into fruitful channels. He emphasized the importance of our active experiences of movement and effort, and though his theory of a central innervation sense is no longer held as he propounded it, its value as a suggestion to later psychologists is great. His autobiography, published in 1904, contains a full list of his works, and also the history of the last thirteen years of his life by WL Davidson of Aberdeen University, who further contributed to "Mind" (April 1904) a review of Bain's services to philosophy.

Works (beside the above) Edition with notes of Paley's "Moral Philosophy" (1852); "Education as a Science" (1879); "Dissertations" on leading philosophical topics (1903, mainly reprints of papers in "Mind"); he collaborated with JS Mill and Grote in editing James Mill's "Analysis of the Phenomena of the Human Mind" (1869), and assisted in editing Grote's "Aristotle and Minor Works"; he also wrote a memoir prefixed to G Croom Robertson's "Philosophical Remains" (1894).

Various schools in Mexico City as well as Irapuato, Guanajuato Mexico are named after him, which consist of kindergartens, primary schools, junior high and highschools.