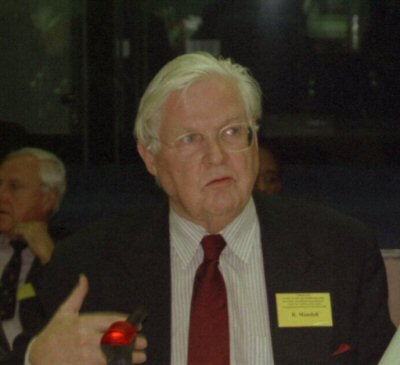 
Robert Alexander Mundell C.C. (born , ) is a professor of economics at . Mundell was born in and is a graduate of the in . He attended the (MIT), where he obtained his PhD in in 1956. He also attended the and was a top performer in his years there. He went on to win the 1999 . Since 1974 he has been a professor in the Economics department at Columbia University; since 2001 he has held Columbia's highest academic rank - University Professor. He was also economics professor at and the , . In 2002 he was made a Companion of the . Robert Mundell, chair of economics at in the 1970s, laid the groundwork for the introduction of the through his pioneering work in monetary dynamics and optimum currency forms for which he won the 1999 Nobel Prize in Economics.

The in the district of , is named in his honor.

Among his major contributions are:
* Theoretical work on s.
* Contributions to the development of the
* Helped start the movement known as .
* Historical research on the operation of the in different eras.
* Predicted the of the 1970s.
*
*

Mundell is best known in politics for his support of s and ; however, among economists it is his work on currency areas and international s which caused him to be awarded the Sveriges Riksbank Prize in Economic Sciences in Memory of Alfred Nobel by the Bank of Sweden (). Nevertheless, supply side economics featured prominently in his Bank of Sweden prize speech.

In the 1960s Canada, of which Mundell is a native, floated its exchange - this caused Mundell to begin investigating the results of s, a phenomenon not widely seen since the 1930s "Stockholm School" successfully lobbied to leave the gold standard.

In 1962, along with , he co-authored the of exchange rates, and noted that it was impossible to have domestic autonomy, price stability, "and" free capital flows - that two, and only two, of these objectives could be met. The model is, in effect, an extension of the applied to currency rates.

According to Mundell's analysis:
* Discipline under the was more due to the US Federal Reserve than to the discipline of gold.
* Demand side would be ineffective in restraining s under a floating exchange rate system.
* Single currency zones relied, therefore, on similar levels of price stability, where a single monetary policy would suffice for all.

His analysis led to his conclusion that it was a disagreement between and the over the rate of inflation, partially to finance the , and that Bretton Woods disintegrated because of the undervaluing of gold and the consequent monetary discipline breakdown. There is a famous point/counter-point over this issue between Mundell and . [ [http://www.irpp.org/po/archive/may01/friedman.pdf Mundell-Friedman debate] ]

This work would later lead to the creation of the , and his prediction that leaving the Bretton Woods system would lead to "" so long as highly progressive income tax rates applied. In 1974 he advocated a drastic tax reduction and a flattening of income tax rates.

Mundell, though lionized by some conservatives, has many of his harshest critics from the right: he denies the need for a fixed gold based currency or currency board Fact|date=July 2007- though he often recommends this as a policy in hyper-inflationary environments - and he is both a fiscal and deficit hawk. He is well known for stating that in a floating exchange rate system, expansion of the money supply can only come about through a positive balance of payments.